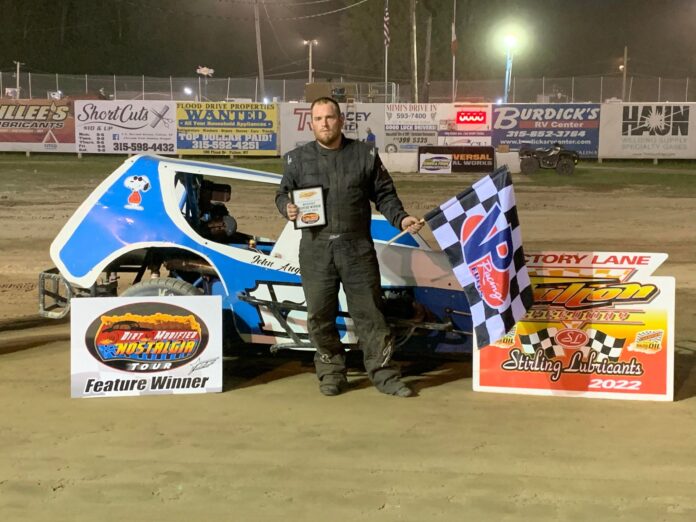 FULTON, NY- Joe August Jr. of Brewerton, NY became the first repeat winner in the Dirt Modified Nostalgia Tour series this past Saturday night with a decisive victory in the 20 lap feature go.
The current points leader would jump out to an early lead from his position three starting spot and click off all 20 laps to take Starter Thomas Hodge checkers.
Behind the 17g was a fierce battle for the runner up spot between Kingston, On native Aaron Pugh, Matt Barbour or Brockville, On, Bill Leonard of McGraw, NY and Bradford, PA’s Steve Longo. The four drivers would dice throughout the race swapping positions lap after lap.
Pugh would eventually take control of second and had opportunities late in the race with several cautions putting him on the rear bumper of the leader. August would prove to be too strong however and Pugh would settle in for second. Barbour would complete the podium followed by Leonard who squeaked by Longo at the line for fourth.
Pit notes: John West night ending early with engine issues in the heat…George Valenti looking very strong leading his heat until contact with the wall in turn four…Frank Brown first time out this season…Heats were won by Leonard and Longo
Next up for the series is a back to back at Ohsweken Speedway and Humberstone Speedway this Friday and Saturday.
1) 17g Joe August Jr 2) 21 Aaron Pugh 3) 37 Matt Barbour 4) 11x Bill Leonard 5) 20 Steve Longo 6) 40 Tim Hegarty 7) 66 Tom Church 8 ) 5 Ace Prentice 9) 36 Brad Litzenberger 10) 30 Frank Brown 11) 007 Butch Leonard 12) 42 George Valenti DNS 4w John West
Photo Credit: Christine Ciglich