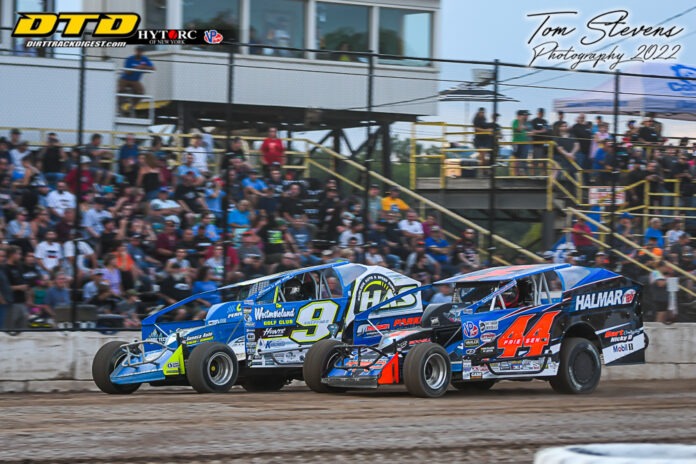 The track was lost and thus a decision was made to move the Big Block Modified 75 lapper to Thursday night along with a Sportsman series event.

A field of 36 cars, mixed between traveling Big Blocks and local 358’s were pit side as the night began.

Stewart Friesen, who cut his racing teeth at the track, returned as though he has never left gaining the fast time award for the night and lining him up on pole for heat number one.

The first heat was a classic side by side battle between two of the best in dirt car racing. Friesen was on the inside and series point leader Matt Sheppard alongside. They raced side by side in the early going  and eventually Friesen was able to pull away while Sheppard settled for second.

With the top three in the heats gaining a spot in the redraw third was critical and Billy Decker chalked up the final spot in the draw. Also qualifying for the main were Marcus Dinkins and Daniel Johnson. 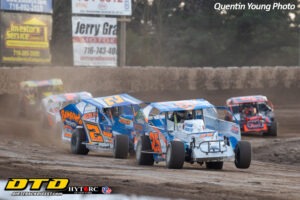 While Ransomville’s own Erick Rudolph was running away with heat number two the battle behind him was a classic between the likes of Anthony Perrego, Tim Sears Jr., Mark Johnson and Jack Lehner.

Lehner broke a suspension part while solidly in a redraw position.

In the end the top three were Rudolph, Perrego and Sears while Johnson and Zach Payne qualified. 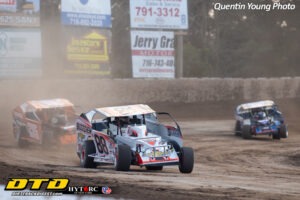 The local theme continued in heat three as track regular Mat Williamson won over ever improving Adam Pierson and Peter Britten. Jimmy Phelps was fourth  and Kevin Root held off J.F. Corriveau for the final spot.

The “local” theme finished up in heat four as Chad Brachmann and Gary Lindberg were first and second and Max McLaughlin rallied for third. Paul St. Sauveur and Ryan Susice also reached the 75 lap qualifying field. 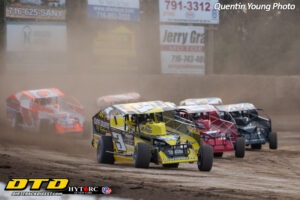 In the last chance races Pete Bicknell and Alex Payne were top two in the first one while Corriveau and Allan Wills got the final two racing spots.

The redraw saw Williamson on the pole alongside Peter Britten while row two is Billy Decker with Lindberg. Friesen and Sheppard are in row three while Perrego and Pierson fill the fourth row. Sears and McLaughlin are side by side in the fifth and Brachmann and Rudolph drew 11th and 12th in the redraw.

In sportsman action heat one saw Brett Senek edge out Chris Mackey while in the second Derek Wagner finished in front of Cameron Tuttle. In the third heat Cody McPherson scored the win over Zach Sobotka.

The line up for the Sportsman even has Justin Sharp and Nelson Mason on the front row.

Hopefully, the 24 hours of Ransomville will conclude tonight with the Super DIRTcar Series 75 lapper taking the green at eight o’clock.