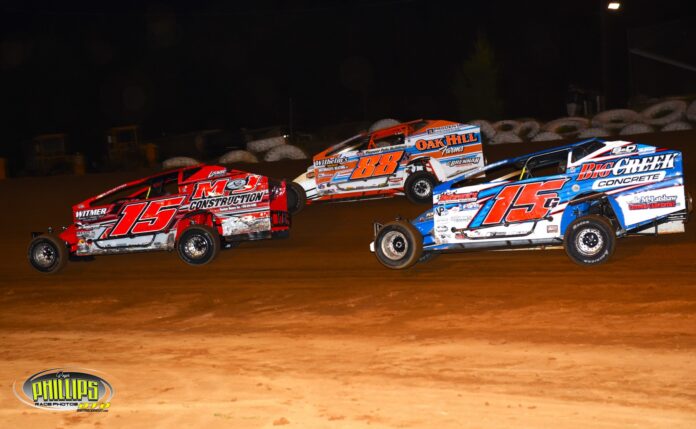 The first weekend in September means Labor Day Weekend, the ending of summer, used to mean that school is starting but most school districts start before Labor Day anymore, the NFL season is upon us, but for the small dirt track nestled in God’s Country the first Sunday in September means much more! It is that Sunday the Big Diamond Speedway presents its annual Coalcracker 72 for the mighty 358 Modifieds.

This tradition has been a part of the Big Diamond Speedway lore and although it does mean the racing season has come to a close, it is a race the teams and fans look forward to every year.

Dirt Track Digest breaks down the race with some history and contenders before you head to Big Diamond Speedway on Sunday, September 2nd.

Duane Howard: How could you not rate Howard as the favorite to win the Coalcracker this year after the season himself and the Butch Getz Motorsports have had at Big Diamond. Howard was the leading feature winner with four along with winning the track championship. The No. 15G team has shown the most speed all year at Big Diamond and could easily have two or three more wins. ODDS: 2-1

Brett Kressley: The “Threat” has come into his own this season at Big Diamond. His No. 19K team have won two features and easily could’ve had three or four. Kressley battled Howard down to the last lap for the track title, losing by a mere five points. The only question mark for Kressley is can he keep his car under him for the 72-lap race and not wear out his tires. Brett made a big statement towards that a couple of weeks ago when he won the 50-lap “Forrest Rogers Memorial” race at Grandview. ODDS: 4-1

Craig Von Dohren: CVD has had a quiet yet very good year in 2022 at Big Diamond. After not qualifying for week number due to motor issues. Von Dohren roared back with three wins and was in contention for the track title coming into championship night ultimately finishing in third. CVD’s three wins have come in two different cars with two in the Brueche & Sons No. 30 and one win in the Dave Dissinger No. 88X. I expect Von Dohren to be aboard the No. 88X for Sunday’s Coalcracker. ODDS: 5-1

Jeff Strunk: The “Bechtelsville Bullett” always has to be considered a contender at Big Diamond. Strunk has not run the full season this year in 2022 at Big Diamond but will definitely be in attendance looking for a return to glory on Sunday. Strunk has raced both the Dave Zubikowski No. 88Z and the Glenn Hyneman No. 126 here at Big Diamond. I expect Strunk to be in the Zubi’s Racing car on Sunday. ODDS: 7-1

Billy Pauch Jr: The “Kid’s Kid” has made infrequent appearances this season at Big Diamond but when he has competed, he has been fast. Pauch Jr would like nothing better than to join his legendary father in the record books as a Coalcracker winner. ODDS: 8-1

Timmy Buckwalter: Like Pauch Jr, Buckwalter has made sporadic starts this season at Big Diamond. The defending Big Diamond track champion has seemed to have lost a little bit of the speed he showed last season here but you can never count out the “Wheel Master General”. ODDS” 10-1

Ryan Watt: Winning and dominating the 2020 Coalcracker race automatically puts Watt as a contender. Splitting his time this season driving the Fitzpatrick Racing No. T102 and the Ron Roberts Racing No. 14W, it has been an up and down year for Watt at Big Diamond. But if there is a driver who can step up his game and win this race it is Watt. ODDS: 10-1

Nick Rochinski: It has been a breakout season in 2022 for Rochinski at Big Diamond. Rochinski recorded his first ever Big Diamond win and backed that up with a strong third place finish in the race for the title. I look for Rochinski to be near the front of the pack. ODDS: 12-1

Louden Reimert: 2022 has been a strong season for the Oley, PA driver. Coming into 2022 Reimert has zero Modified wins but now the young driver has four wins including his first career win at Big Diamond. Reimert should be a factor on Sunday. ODDS: 12-1

Mike Gular: It has been a hard and humbling year for Gular and the Terry Fastnacht No. 2A team racing on the SDS. But the 2020 Big Diamond champion is back and hopes to take what he has learned on the road this year to better himself in the season ending big money races. ODDS: 12-1

Ryan Krachun: The Neshanic Station, NJ driver won his first ever feature this season in winning the “Money in the Mountains” race back in April. Krachun is always fast at Big Diamond but other than his win has had a hard time finishing. ODDS: 15-1

Rick Laubach: The “Quaker Shaker” has shown flashes of speed this season at Big Diamond, but the consistency just hasn’t been there. Still a driver you can never count out. ODDS: 18-1

Mike Lisowski: Has been very consistent all season finishing a strong sixth in points. ODDS: 20-1

Doug Manmiller: Although not confirmed, I expect the former Coalcracker winner to be in the pits for Sunday’s race. ODDS: 22-1

Jack Butler: Getting his first Modified earlier this season at New Egypt Speedway, Butler has been fast in his few visits to Big Diamond. ODDS: 25-1

Qualifying heats lineups will be determined by the draw. Number of entries will determine the number of heats that will be run. The top finishers in the heats will draw for the top 12 feature starting spots. There will be no Provisionals at this time.

The feature event will be 72 laps in length, only green flag laps will count. There will be no fuel stop.

We always prefer that you come to the track to witness the sights and sounds of dirt track racing. But if you cannot make it to the track, Sunday’s Coalcracker race will be available to watch via PPV on DirtTrackDigest.tv for $39.99