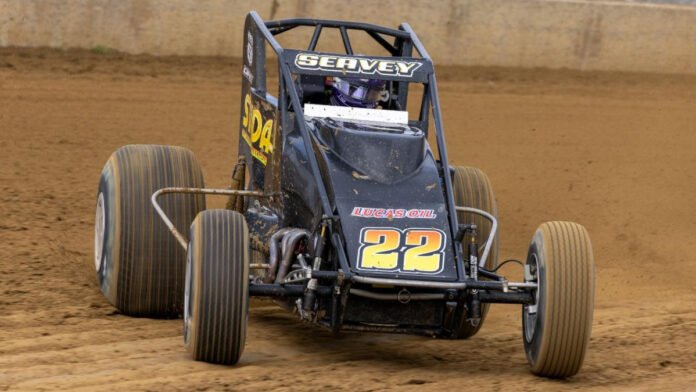 DU QUOIN, IL – Following his runner-up performance during his debut Ted Horn 100 experience a year ago, Logan Seavey explained how he was still amid the learning process of how to properly manage a 100-mile USAC Silver Crown race.

In particular, he lamented about taking it a bit too easy in the beginning and giving up too much track position and taking a conservative approach regarding how much tire he could preserve and have left for the final push at the end.

All those factors were put to the test Monday afternoon on a giddy-up style racetrack uncommon to one-mile dirt track racing that came to fruition after two-straight days of heavy rain doused the Du Quoin (Ill.) State Fairgrounds soil.

In an attrition-filled event which saw just seven of the 30 starters make it to the finish line, when all was said and done, Seavey pounced when the dominant Shane Cockrum ran out of fuel with 13 laps remaining and C.J. Leary’s car snapped a driveline while leading with seven laps to go.

Seavey leapfrogged both drivers to assume the lead, then led the final seven circuits to score his second consecutive dirt Silver Crown victory of the season in his Rice Motorsports/STIDA.com – Lucas Oil – Legacy Motorsports/DRC/Pink Foxco Chevy.

The Sutter, Calif. native’s first USAC Silver Crown victory on a one-mile track came via a 33.882 second margin, nearly a full lap ahead of second running Cockrum who raced his way back onto the lead lap in the waning stages.

In winning the 68th running of the Ted Horn 100 Presented By MiteXstream, Seavey became the first driver to win both a USAC Silver Crown feature and an ARCA Stock Car main event at Du Quoin, which he did back in 2018.

Even when everything doesn’t exactly go to plan, and the plan evolves into overcoming hardships, the task requires one to be in the right spot at the right time, and when crunch time arrived, Seavey was right in the thick of the hunt and, on occasion, without the aid of both of his hands.

“I battled a lot of adversity there early,” Seavey explained. “My radio kept coming unplugged and I was driving one handed trying to get it plugged back in. But (the engine) is perfect for these Silver Crown races. It makes just the right amount of power and is both really drivable and really good on fuel.”

Early on, and for the high majority of the 100-miler, the dominant force was Cockrum. The local product who was born, raised and lives about 20 minutes away from the Du Quoin State Fairgrounds in Benton, Ill., was the fastest overall in Dirt Draft Practice, then subsequently recorded his first career Silver Crown pole during Fatheadz Qualifying.

Despite starting from the number one spot, it was outside front row starter Leary who initially held the upper hand as he led the initial lap.

On a lap five restart, the car of Chase Stockon failed to take off on the front straightaway, creating a log jam just behind him. Travis Welpott ramped over Stockon’s right rear tire, but kept on, while further back, Dallas Hewitt and Korey Weyant collided and sent Hewitt flipping upside down while Weyant soared airborne before crash landing with a knocked out front end. Both drivers walked away from the scene, but their races were cut short.

Leary maintained his hold of the lead until lap 12 when Cockrum white-knuckled his way around the outside Leary in the turn one rough to put himself atop the board.

A lap later, the yellow flag was displayed for an incident involving third-running Davey Ray, who lost his steering in turn four, which spurred him into a spin and into the path of fourth-place Justin Grant who plowed into the front end of Ray, resulting in both driver’s afternoon’s coming to an abrupt end.

With Cockrum up front, he was dead set on burying the field and become the first pole sitter to win the Ted Horn 100 since Shane Cottle 15 years earlier in 2007. Cockrum, a fire chief by trade, constructed separate country-mile lead margins of 10 seconds (on lap 30) and eight seconds (on lap 49) which were both wiped out by cautions. Yet it was barely a blip on Cockrum’s drive as he routinely picked up right where he left off when racing resumed.

Another halt arrived once more on lap 57 when fifth running A.J. Fike biked on his entry into turn three, hiking up the left rear wheel, which bounced back down on the surface, then bucked back up, launching him up and over the outside concrete retaining wall. Fike ultimately walked away from the first Du Quoin “out of the ballpark” experience by any driver in several years.

Jerry Coons Jr., making his 21st Ted Horn 100 start, was able to stay in step with Cockrum for the lead with under 30 laps to go, but he too experienced an engine issue of his own on lap 81 as he fell to the wayside in his bid for a first career win at Du Quoin.

In complete control, Cockrum was cruising with no other soul in his vicinity. That is, until the unbelievable occurred on lap 87 when the driver who had led the last 75 consecutive laps in a row slowed to a complete stop on the back straightaway, with his tank dry, out of fuel.

Cockrum pitted to fill up, and while he was in the pits, the field drove past under caution, putting Cockrum one lap down to new race leader Leary and second-running Seavey. However, with only the front two cars on the lead lap, Cockrum merely dropped back to third when the race restarted on lap 90.

Leary’s time spent up front proved to be short-lived. On lap 93, mechanical issues brought on the heartbreak as he slowed dramatically in turn three with a driveline issue, which knocked him out of contention for his first one-mile dirt track triumph. Seavey succeeded Leary as the new race leader and found himself a full lap ahead of second place Cockrum.

However, Seavey still had a bit of trepidation on his mind during the final laps and nearly altered his strategy due to being a full lap ahead and, seemingly, having nothing to lose.

“I wanted to pit on that last yellow to get fuel since we were the only car on the lead lap,” Seavey revealed. “We couldn’t make the decision fast enough, though. This thing gets such good fuel mileage that I wasn’t super worried, but I’d rather play it safe.”

Of note, a USAC Silver Crown race hadn’t seen the leader a full lap ahead of the field at the finish line since Jeff Bloom did so at Indianapolis Raceway Park in 1987. But that notion was put to rest when Cockrum charged ahead of Seavey when the field took the green on lap 98 for the final three-lap sprint. Cockrum gained his lap back but remained a full mile behind Seavey with the sand in the hourglass running down to the final grains.

Seavey, all by his lonesome for the final magic mile, went untouched the rest of the way to capture his fourth career series win, tying Shane Cockrum, Justin Grant, Kyle Larson, Jeff Swindell and Rich Vogler for 33rd all-time.

Shane Cockrum (Benton, Ill.) nearly had it all in his BLS Motorsports/Hustler Turf Equipment – Ben’s Lawn Service & Trailer Sales/Maxim/Kistler Chevy. He led 75 of the 100 laps and continuously held a massive lead throughout the day until stunningly running out of fuel with 13 laps to go. In the end, he just missed out on a third career Ted Horn 100 victory after scoring previously in 2014-15. In the process, he ran his top-five finishing streak to eight at Du Quoin, which dates all the way back to 2013.

Kody Swanson (Kingsburg, Calif.) fell back to 12th, lost a lap and stopped to pit on multiple occasions, but there was no quit in the six-time USAC Silver Crown champ on this day in his Doran-Dyson Racing/Concord American Flagpole – Racer Magazine/Maxim/Kistler Chevy. Swanson soldiered home to a third-place result and maintained his lead in the season-long title fight, which now stands at 57 with three events left on the calendar.

**Dallas Hewitt flipped on lap 5 of the feature. A.J. Fike flipped over the turn three wall on lap 57.