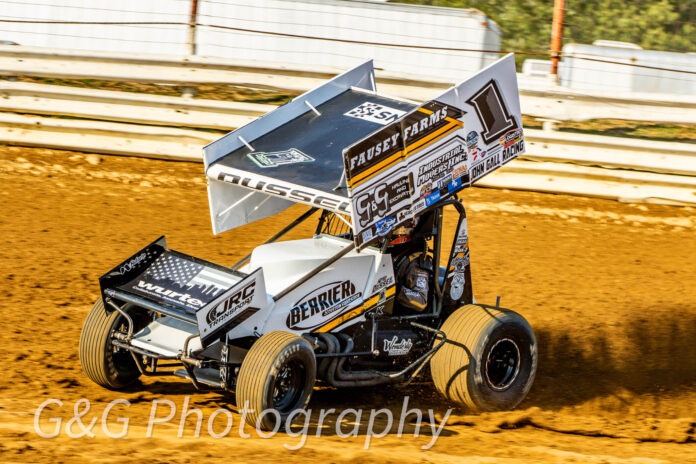 There were 32 FAST on Dirt 410 Sprint Cars on hand and AJ Flick set fast time with a speed of 13.676 seconds.  The 30-lap feature event saw Jack Sodeman, Jr. on the pole for the start of the race and when the field went green it was Sodeman, Jr. that got the jump over the field and led the first lap before a caution flag waved for Ken Rossey who spun along with Cody Bova.  On the restart for lap two, Nate Dussell was able to make the pass for the top position and take the lead away from Sodeman, Jr. who fell back to second.  The caution flew once again on lap nine for Logan McCandless who spun in turn four.  Fourth starter, AJ Flick who had been riding in third made the pass over Sodeman, Jr. to take second on lap twelve and then went to work on the leader, Dussell.  The top two cars started getting into some heavy lapped traffic and it looked like Flick might be able to use the lapped cars to his advantage and take the lead away from Dussell.  However, on lap twenty the caution flag flew again for Chase Metheney which slowed Flick’s progression.

Another caution flag flew on lap twenty-five when Ken Rossey, Cody Bova and Skylar Gee got together on turn four.  According to FAST’s rules after two cautions you are done so both cars were sent to the pit area.  The final five laps saw Dussell with the command of the race and Flick tried a couple of times to work on Dussell but he ran out of time.  Dussell captured the win and the $5,000 top prize money courtesy of Krill Recycling, LLC and North Rock Construction. AJ Flick finished second ahead of Zach Hampton, Brandon Spithaler and Jack Sodeman, Jr.  S & W Auto Body sponsored heat race money for both the 410 Sprints and the RUSH Wingless Sprints.  Bill’s Service Company put up $250 for quick time which went to AJ Flick.  Heats were won by Nate Dussell, Ricky Peterson, Logan McCandless and Jack Sodeman, Jr.  The B-Main was won by Danny Smith.

Blaze Myers and Brian Hartzell brought the field of RUSH Wingless Sprint Cars to the drop of starter, Brian Wagner’s green flag.  Myers sprinted out into the lead on the first lap, but a caution for Phillip Young slowed the pace.  Once back under green, Myers once again took the lead over John Mollick Brian Hartzell and Gale Ruth, Jr.  John Mollick took the lead away from Myers on lap six, but the caution flew once again for Charlie Utsinger who came to a stop just off the apron on the front stretch.  The final restart found Mollick in command and went the rest of the distance to capture the feature win.  Finishing second was Gale Ruth, Jr. followed in third by Blaze Myers.  Chad Ruhlman in the Engles Motorsports #68 finished fourth with Andy Priest in the Ted Hull owned #41 machine finished fifth.  Heats were won by Ruth, Jr. and Ruhlman.

Chris Schneider and Curtis J. Bish started on the front row of the Pro Stock feature that featured 21 cars for the event.  Curtis J. Bish jumped into the lead at the drop of the green with Schneider close behind.  Brandon Conner closed in on Bish after getting around Schneider on lap six.  Bish continued his dominance of the feature until a red flag flew for Mark Bell on lap seventeen which brought the race to a stop after he flipped at the end of the front straightaway.  Bell was uninjured in the incident.  On the final restart with three laps to go it was all Bish as he won by a margin of 0.841 seconds over Brandon Connor.  Bobby Whilting came from the sixth starting position to finish third with Chris Schneider falling back to fourth and Dave Shagla, Jr. rounded out the top five.  Heats were won by Schneider and Bish.

The final feature of the 2022 racing season found the Washington House sponsored Mini Stocks take the track with 20 cars.  Josh Frantz who started fourth found his way to the front of the field on the first lap and never looked back to win the $1,200 prize money.  Andy Thompson who is the 2022 Mini Stock Champion at Michaels Mercer Raceway finished second with Cole Miller third.  Fourth place went to Josh Eakman with Randy Ealy, Jr. taking home fifth.  Heats were won by Josh Frantz and Andy Thompson.

This concludes the final circle track race of the 2022 at Knox Raceway, however; the track is not done for the year as they will be hosting a Fall Fury Demolition Derby which is put on by GrandStand Promotions and will feature six different classes and will start at 6pm.  For more information, please follow Knox Raceway on their Facebook page.

Knox Raceway, a 3/8 mile clay oval owned by Brian and Brianna Steinman was purchased late in 2021 and has opened for the season in 2022 to provide entertainment for the local community by hosting Demolition Derbies, Truck and Tractor Pulls, Circle Track Racing and in the future Rodeos, Concerts, and many other fun events.