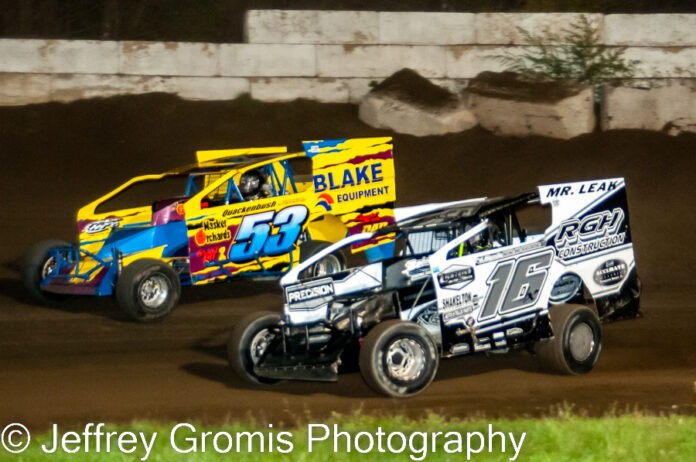 KIRKWOOD, NY-Dan Creeden made his fourth appearance of the season at Five Mile Point Speedway on Saturday.  This time he made it count as he recorded his first victory of the season in the Don Beagell, Jr. Memorial 29.  The Modified victory in the 29 lapper was worth $2,900.

The start of the Modified 29 lap feature event got off to a rough start.  As the field came around to complete lap number 1 one car jumped a tire exiting turn 4 and chaos ensued. Several cars came together on the homestretch with Shaun Walker taking a wild ride and getting the worst of the incident.  Nick Rochinski, Bobby Hackel and Joe Eisenhauer all saw their evening end before a lap was completed.

On the restart things immediately settled down.  Will Shields raced out into the lead at the green but 2022 Modified Track Champion Brett Tonkin was quick to overtake the point on lap number 2. Tonkin quickly opened up his margin on the bottom of the quarter mile as Shields road the cushion around the speedway.  Dan Creeden was quick to challenge Shields for second and took over that spot on lap number 5.  The caution flew on lap 8 for a piece of metal on the track and when racing got back underway Tonkin was up to the challenge from Creeden.  Three more cautions slowed the action between laps 10 and 11.

When the green flew again on lap 11 Tonkin continued to lead the way as Creeden stayed close.  The final caution of the race flew on lap 13 when P.J. Goodwin spun in turn 4.  This restart would be different as Creeden used the outside line to overtake Tonkin for the lead.  Once Creeden took over the lead he immediately opened up his advantage.  Throughout the field there were several great battles and charges forward.  On lap 15 Creeden collected the “Dale and Sue Smith Halfway Leader Award” worth $290.

The second half of the race saw Justin Holland close in on Tonkin for second place as Creeden opened up a big lead over their battle.  Holland had started in eleventh and he was hoping his charge forward was not over.  Brian Malcolm, Brian Puckett, Ryan Darcy, Joey Colsten and Doug Smith had all started deep in the field and were solidly in the top ten battling over the final laps as well.  Holland made several attempts on Tonkin for the second spot but Tonkin was up to the challenge.  At the finish Creeden won by over a straight-a-way over the field.  Tonkin finished second with Holland third.  Malcolm charged from seventeenth to fourth and Shields finished in fifth. J.R. Fulper had a strong run for sixth at the finish with Brian Puckett advancing from fifteenth to seventh at the stripe. Alex Tonkin was eighth with Ryan Darcy driving from sixteenth to ninth. Joey Colsten started twentieth on the field and wound up tenth.

Creeden also won the Modified Dash for Cash which was worth $500.  With additional bonus lap money and the halfway leader award, Creeden walked away with just under $4,000 on Saturday.  Long time race fan Joe Weiss posted the $2,000 runner-up amount and made a presentation to Brett Tonkin in victory lane.

Travis Green made a rare visit to the speedway pay off as he picked up $1,000 for the victory in the Crate Sportsman 25 lap feature event.  The race was event number 2 of the Fall Series at the speedway.  2021 and 2022 Track Champion Gary Smith started seventh and chased down Green throughout the second half of the race.  Fall Series race number 1 winner and Spring Series Champion Seth Zacharias, made several serious bids for the race lead during the first half of the race but was sidelined on lap 17 with a blown motor.  Green would go on for his first Five Mile Point win with Smith settling for second.  For Smith, the second place finish was enough to give him the Fall Series point lead. Doug Snyder invaded and came home third.  His only other Sportsman start was back on June 21st in which he won.  Blaine Klinger finished fourth after starting ninth and Ray Leonard bounced back from a heat race wreck to finish fifth.

The 600 Modified 20 lap feature was a thriller.  Four cautions slowed the event for mainly minor incidents. Fifth place starter Brenton Miller took the lead on lap 11 and never looked back.  Jared Green once again had to work hard after starting in ninth place.  He was able to take second at the finish.  Fall Series race 1 winner Justin Ladue finished third with Jake Waibel and T.J. Smith completing the top five.

The 20 lap Factory Stock feature was another great race with only three cautions slowing the action for minor spins. Fall Series race 1 winner Dominic Albanese started on the pole for the feature and led the first 9 circuits.  Bob Mills started fourth and worked his way up to second on lap 4.  The two engaged in a great race with Mills take over on lap 10.  Once Mills had the lead Albanese did not fold his cards.  He remained close and made several bids to retake the race lead.  As the race leaders battled seventh place starter Kevin McDonald began to close in on the duo.  In the closing laps McDonald may have been the fastest car on the track but ran out of laps.  At the finish it was Mills, Albanese and McDonald.  Maylon Shoemaker made his second start of the season and would up in fourth. Alecia Towner was fifth.

After only one previous start (in Fall Series Race 1) in the Sportsman division Devon Green led all 20 laps in the Futures Sportsman feature on Saturday.  His victory came over Fall Series race 1 winner Joe Buchanan and Derrick Shaffer.  The trio ran one, two, three the entire 20 laps. Lance Hill had another strong run in fourth with Brennan Chapman finishing in fourth.

Kenny Underwood took the lead on lap 4 and went on to win his second straight Four Cylinder Expert Fall Series Feature event.  He was followed across the line by Eric Rowley, Rich Wagner, Brian Salmini and Colin Mills.

COUNTER POINTS…Thirty-Five Modifieds attempted to qualify for the Don Beagell, Jr. Memorial 29 on Saturday…The race was just added a few weeks prior after Mr. Beagell had passed away…Members of the Beagell Family were on hand including brothers Roger and Gary Beagell who made presentations in victory lane…Don Beagell, Jr. was a 29 time Modified feature winner at the speedway and one of the “Original Greatest 50 Drivers” at the speedway as announced in the 50th Anniversary season in 2000…Bonus lap money was raised for the teams with all 29 laps being sold…Fall Series race 3 takes place on Saturday, October 15th…The Chad Sindoni Memorial 34 lap Street Stock race will highlight that event.