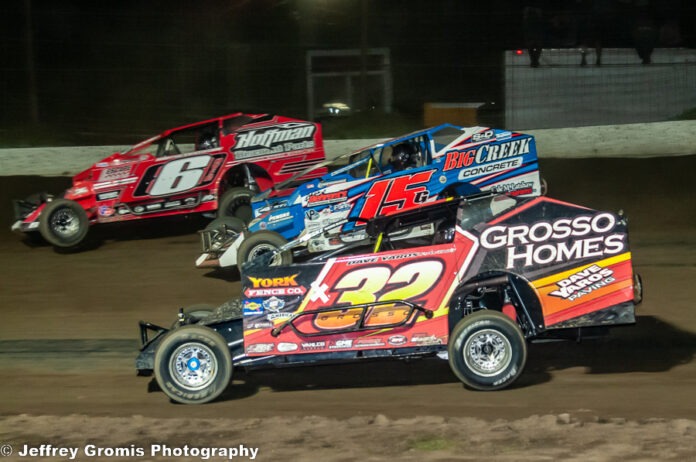 The Rogers family is pleased to announce that racing will be presented at Grandview Speedway in 2023. As mentioned in an August press release put out by track owner Mrs. Theresa Rogers, that when more information was made available about the proposed sale of the racetrack property, then it would be released.

The Rogers family is releasing word to the many loyal race teams and race fans who have supported the 60-year-old one-third-of-a mile high banked speedway, that the Copart company, who had entered into an agreement with Mrs. Rogers to purchase the Speedway pending approval from Washington Township officials where the track is located, has terminated the deal.

To put rumors and speculation to rest, Mrs. Rogers would like to let all the loyal fans and race teams of Grandview Speedway know some facts about the situation rather than hearing rumors on the street or from social media.

The racetrack was never listed for sale, and the whole possibility of a sale started when Copart sent an email to the Speedway looking for property, and discussions went back and forth from that time, with Mrs. Rogers eventually accepting their offer to sell the property in late summer.

The Copart company then submitted their proposal to Washington Township officials for what they had intended to use the property for and began working through the process of gaining the necessary approvals, which was a requirement in the contract between Copart and Mrs. Rogers.

Copart then had their first and second applications denied by Washington Township officials, with the third time being accepted.

On September 29th via email, Copart reached out to Mrs. Rogers stating that Washington Township had requested they apply for a special exception permit. That permit would require a public hearing that likely could not be set anytime sooner than sixty days from the time of application.

In order for this to happen, a signed agreement from Mrs. Rogers for an extension past the due diligence date of November 10th would be needed. Mrs. Rogers then denied the request to Copart for the extension, stating as mentioned the past several months, that she would keep her word and would not interfere with the upcoming race season if there were no sale between the two parties, stating “She would not do that to the drivers and race teams that are preparing for the upcoming race season”.

On October 26th Mrs. Rogers received an email from Copart with a notice of the termination of the contract for the sale.

The reason for such a strict deadline was to allow for the planning of a new race season if a potential deal would have been blocked by the Township. It would not have been fair to race teams who compete at the Speedway and speedway management to have to wait until mid-winter to find out if the track would be holding a 2023 season or not, as they all need time to prepare for the new campaign.

Also, to put other rumors to rest, there were no other offers made to the Rogers family prior to Copart, to purchase Grandview Speedway.

At this time the Rogers family will focus on preparing for the 2023 racing season and schedule, which will once again include the 358 Modifieds and Sportsman as the two mainstay divisions every Saturday night.  Bob Miller, co-promoter of the Thunder on the Hill Racing Series, has confirmed with Alan Kreitzer a June 27th date for the always popular PA 410 Sprint Speedweek race. Miller has also been in contact with USAC to confirm dates.

The Saturday night racing schedule will look similar to past years with the two division Modified-Sportsman shows with an occasional third division added to the schedule.

All the traditional favorites will return as well on their usual dates, including the annual races like the Bruce Rogers Memorial Money Maker, Firecracker 40, Forrest Rogers Memorial, Freedom 38 and Freedom 76. Further information will be available in the coming weeks.

Track management will be having a meeting shortly with track officials to discuss the upcoming season such as rules etc., and no major changes are expected.

Members of the media who wish to cover events at Grandview Speedway in 2023, are asked to visit the speedway website at www.grandviewspeedway.com click on the rules/forms tab, fill out the media application and return it to Tina Rogers no later than February 28, 2023. Thank you very much to those who covered the events in 2022.

Mrs. Rogers and her family would like to thank the drivers, owners, fans, and staff for all the support, and appreciate their patience and understanding while all this was worked through the past few months. We look forward to seeing everyone in 2023 for the 61st anniversary season!

For everyone who supports Grandview Speedway, LET’S GET READY TO GO RACING!!!!