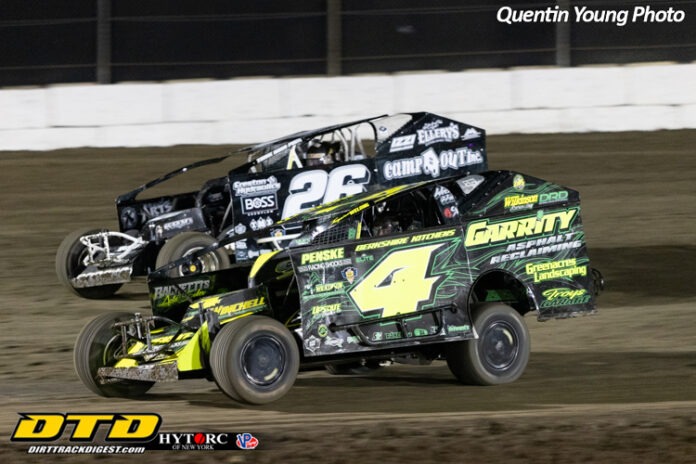 Godown, who won the event held over from Tuesday and sits third all-time on the STSS win list, came just two laps from sweeping the night as he slowed to a stop with a right-rear flat as the leader in the second main event.

The pair have been staples amidst the best in STSS history. With his win, Bachetti joined Godown in the top five on the all-time win list, moving into sole possession of fifth with the seventh triumph of his career. The Sheffield, Mass., native dealt with some heartbreak of his own after suffering a flat with five to go while running second in the night’s first feature race.

Bachetti cashed $5,000 for his win, with Schilling, Adams, Rudolph and Matt Sheppard rounding out the top five.

After Tuesday’s action was halted and postponed to Wednesday due to fog, the night started with a Modified B-Main to set the 26-car feature field. On Tuesday, 35 diverse Modifieds signed in for racing action in Petty, Texas, a Cajun Swing record.

With the lineup set, Tyler Siri and Rudolph led the field to the opening green flag. After an early-race caution, Bachetti moved by Godown for the runner-up spot and closed on Siri as the frontrunners entered lapped traffic on lap 11. Bachetti passed Siri just a lap later, and Siri lost spots to Godown and Rudolph in quick succession before slowing with an issue.

On that lap 11 caution, Bachetti led Godown, Rudolph, Rex King Jr., Dan Creeden and Sheppard. Before the field stood on the throttle again, however, Sheppard, who started 19th, was forced to the pit area with engine problems.

On the ensuing restart, Lehner was the big mover, advancing into fourth by lap 16 before a caution for King on lap 20. Just before the yellow, though, Bachetti and Godown split a lapped car and were fiercely battling for the top spot.

Godown used the next restart to snatch the lead and led until five to go when Bachetti slowed with his flat.

“That was tough, short-track, up-on-the-wheel racing,” Godown said in Victory Lane. “There’s no pressure down here, we just want to keep rolling and it’s really cool to get the win off your back early in the week.”

Lehner came from ninth to wind up as the runner-up.

“Ryan was really good,” he said on the front stretch. “I was too tight to get comfortable or make any run at him.

“I’d be alright and then I’d get tight and he’d get away, but I’m happy with tonight,” Lehner added.

Rudolph started the 30-lap feature from the outside pole, dropped back a few spots and then rallied to place third.

“Every time you land on the podium, you’re doing something right,” Rudolph said. “Time to make a few adjustments to get better for this second feature.

Schilling and Adams rounded out the top five. Adams started in 13th, was forced to the rear after getting in an accident on the opening lap of the race and drove all the way back for a top-five finish.

After a full night of qualifying, Creeden and Godown led another 26 cars to the green flag for 35 laps and $5,000 up for grabs.

Following a series of early cautions, Godown eventually wrestled the lead from Creeden with Sheppard, Bachetti and Adams rounding out the top five. On that lap-13 restart, Bachetti used the outside lane to rocket from fourth to second, around Sheppard and Creeden to put himself in contention. Just seven laps later, Sheppard slowed with a right-rear flat, sending him pitside and bunching the field up once more.

After a pair of restarts, Godown led Bachetti, Rudolph, Creeden, Adams and Schilling. Schilling became the one to watch with passes on Adams on lap 24 for fifth and then Creeden for fourth just a lap later. Rusty Smith, who was running inside the top 10, slowed to a stop on lap 29, meaning the field would take off in double file formation with six to go.

Godown still led at the drop of the green, Bachetti was second and now Schilling moved to third when he drove around Rudolph on the outside. Adams followed Schilling into fourth, then Rudolph and Sheppard, who was back into contention after his early-race flat.

The major moment of the race, though, came on lap 33 when Godown, just two laps from sweeping the night and cashing $9,000 in total, slowed to a stop, relinquishing the lead to Bachetti.

Bachetti then cruised to his seventh career STSS win, moving out of a three-way tie with Billy Pauch Jr. and Ryan Watt and into sole possession of fifth on the all-time list.

“Ryan was good and has been all night, but we’ve been working our tails off to come down here and have some fun,” Bachetti said in Victory Lane. “This win is definitely going to make the next couple of days more relaxing.”

Schilling capped his night with a second-place finish, his STSS career best and his second top five of the evening.

“We made a lot of adjustments after the heat race and were able to get through the ruts much better,” Schilling commented. “The track was better than I thought and we just had to survive for a while and be able to maneuver and steer on restarts. We’ll definitely take a second.”

Adams also notched his second top-five of the night and the second for the Ark-La-Tex contingent with an impressive third-place run.

“I got so tight at the end, but I just wanted to try and stay consistent. It’s been really fun so far, just being able to restart next to and race around with Matt Sheppard is really cool,” Adams said in front of his local supporters.”

Rudolph earned another top five in fourth and Sheppard, who suffered some nasty luck all evening long, rallied for fifth.

Finishing sixth through 10th, respectively, were: Creeden, who battled with an extremely tight race car through the second half of the race; Steve Davis, Rusty Smith, Siri and Godown, who rebounded to 10th with just two laps left.

Still three more nights of racing – and plenty of money – are left in the Ollie’s Bargain Outlet STSS Cajun Swing Presented by Wegner Automotive. On Thursday, the traveling crew unloads at Ark-La-Tex Speedway in Vivian, La. for a 35-lap, $4,000-to-win event. The final two legs take place in Greenwood, La. at the Boothill Speedway for another $4,000 to win on Friday and then the $20,000-to-win finale on Saturday night.

A complete information center for the Ollie’s ‘Cajun Swing’ presented by Wegner Automotive has been posted on the STSS website at: https://shorttracksuperseries.com/event-info/

The entire five-night swing will be broadcast live to a national audience on FloRacing (www.floracing.tv) as part of the $150 annual subscription.

Did Not Start: John Lutes, Jr.