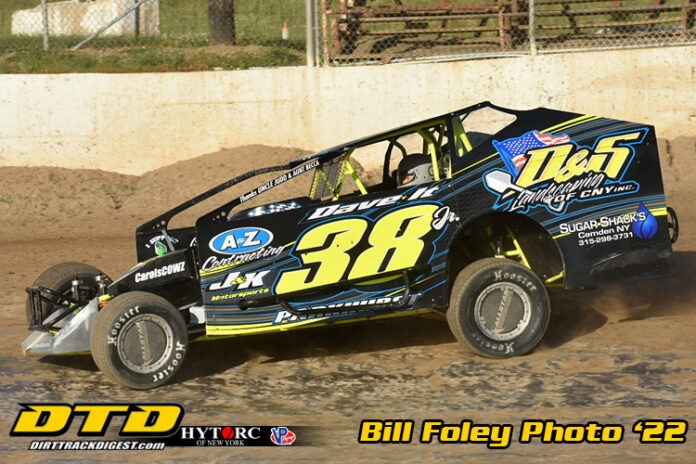 FULTON, NY-When Jason Parkhurst Jr. raced in the Sportsman division at Fulton this year he was just 13 years old.

And he made a quick impression.

Jason Parkhurst Jr. appears to have his head on straight. 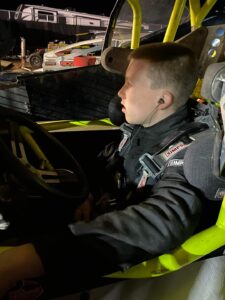 The pre-teen had expectations entering his first season of DIRTcar Sportsman racing at Fulton. The family had a plan, but as all plans go things didn’t go according to plan.

Jason said, “”We started the year in the Rookie Sportsman class and that’s where we were planning on running. However, I guess I won too much and they kicked me up to the regular Sportsman. We had four wins and  were moved out of the rookie division.”

The Mexico Academy freshman hasn’t had a ton of experience, but turned some heads during the Outlaw weekend at Fulton.

He said, “I ran a dirt go kart four times last year and had some success. I have been driving go karts since I was four.”

For years his dad Jason was a Crate Late Model driver, but with the writing on the wall of the demise of the class at Fulton he went 358 racing and “LJ” (Little Jason) was going to get an opportunity to drive.

LJ said, “We got a car from some guy in Pennsylvania.  The idea was to have fun and learn.”

And learn he did.

He held his own during the season and  noted, “In our third race with the Regular Sportsman I finished second” in a  race where  ran side by side with Kevan Cook for nearly 20 laps before eventually finishing second. 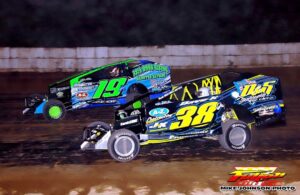 However, LJ came into his own on Outlaw Weekend for the huge Industrial Tire of Central New York Sportsman Shootout.

Nearly 100 cars were outside as the cars prepared for heat qualifying on Friday night.

Parkhurst was confident as he noted, “My car has been awesome. It is a really good car and we have had some pretty good laps. I picked it up quicker than I thought I could.”

So there he was in a heat that was loaded and included the formidable Matt Janczuk, Canadian veteran Jessica Power, Tyler Corcoran, Kyle Devendorf and Michael Wagner-FItzgerald.

When the dust had settled he was nine-tenths of a second behind winner Corcoran and guaranteed a spot in the Saturday main event.

“When I crossed the line it was screaming. It was so awesome and I was so happy’, he said, “In our time trial the car was really good. A bit tight, but we had some good laps. Running 50 laps will be so different. We are starting tenth, but we are in the show. I need to make sure that no one drives over me and just race.”

The end result was probably a morale victory as he finished in the lead lap in 22nd place in the 33 car field consisting of the top talent in the Northeast.

Driving a Sportsman isn’t easy for anyone, but “Big Jason” and Kevin Cook have mentored the young driver quite well in a very short period of time.

Jason appreciates his family and what they do for him as he noted, “My dad does most of it. I am learning set up by watching him.  He has taught me a lot. How to work the throttle and keep things smooth. I get to put the oil pan on and I hate it. It is so difficult. ”

He also attributes some of his progress to something a bit different.

“I have a Dirt Track Digest TV subscription and I watch our races every week. I see all the wrong stuff I did and I learn from it”, he said.

Jason hopes to improve, but saying something most folks older than him might say, he explained, “I need to keep a level head, not get cocky and have to maintain my composure when I am out there.”

However, as a 13 year old he also noted, “It was much funner than I thought it would  be.”

He said, “I really was much more competitive this year than I ever thought I would be. I really have to thank my mom and dad for what they have done for me.”

Impressions are important in life and this pre-teen, as he prepared for the biggest race of his life, took time for an interview and then reached out his hand and said, “Thank you for interviewing me.”

Jason Parkhurst Jr. was impressive his first year in a Sportsman, but more importantly is very impressive as a young man.