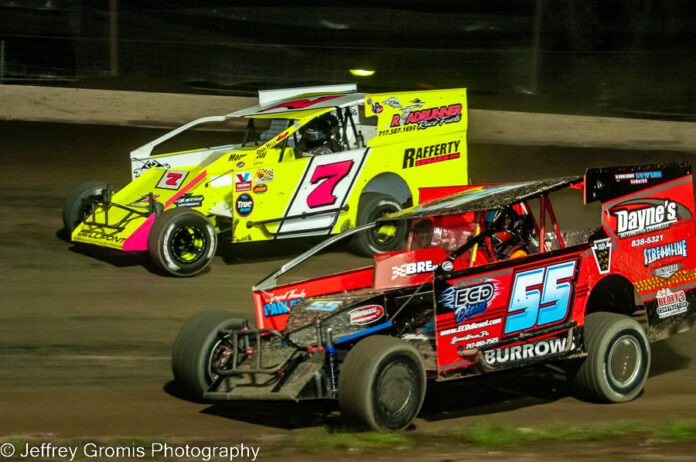 BECHTELSVILLE, PA. – Track officials from Grandview Speedway just completed a review of track rules and procedures and are releasing information regarding the results of that recent meeting.

There are no changes for the 2023 racing season for the 358 Modified division, however, there is a rule clarification for the Modifieds and some adjustments for the Sportsman.

Once again for the 2023 season the Sportsman division competitors will be able to use the open engines or the 602 crate engines in competition. The rules, procedures and weights will still be the same as last year, with the only change being the rev chip on the open Sportsman changing from the 7000 chip, to a 6800 chip.

Track management will continue to keep a watchful eye on the Sportsman class during the first half of the 2023 season. Race teams will be informed by the July 8th Firecracker 40, as to whether the class will continue under the same format or switch to 602 crate engines only for competition in the 2024 or 2025 seasons.

Race teams using the crate engines in Sportsman competition are also reminded that Grandview Speedway will once again be allowing teams to have their engines repaired under the supervision of the RUSH Racing Series. The rebuild center will be KB Performance 6807 Mosserville Road, New Tripoli, Pa. 18066, phone number is 610.751.9650. The same procedures used last season for the rebuilding process will be followed again for the upcoming new year of competition.

Sportsman division drivers will also see a slight change of procedure for feature events in the new season. If there should happen to be two cautions occurring in the same lap, a single file restart will occur at that point, regardless of how many laps are completed. Once another lap is scored, subsequent restarts will go back to being double file, until the feature reaches the final five laps of the main event, when restarts will be single file as in the past.

Competitors are also being informed that for the season ending Freedom 38 championship for the Sportsman, that Modified division drivers will no longer be allowed to compete.

The cost of an official protest has been changed. Any team wishing to protest another competitor must follow the procedures outlined in the Grandview Speedway online rule book under the rules/forms tab at www.grandviewspeedway.com with the cost now being set at $2000.

Speedway management will once again be offering the always popular season passes. The grandstand passes make for great Christmas gifts and cover all Saturday night events, from the Bruce Rogers Memorial Money Maker through to the Freedom 38 Sportsman and Freedom 76 Modified championship races in September. The season pass does not include the Rogers Family/Bob Miller promoted Thunder on the Hill special events. Season passes, priced at $400 per pass, can be ordered by sending a check or money order to Grandview Speedway, 87 Wilt Road, Bechtelsville, Pa. 19505. If ordering a pass as a gift for someone else, please make note of that when placing your order please, Thank you. To speed up the delivery process, please send along a self-addressed stamped envelope.

The Saturday night racing schedule will look similar to past seasons with the two division 358 Modified and Sportsman shows with an occasional third division added to the schedule.

The traditional Free-to-the-public open practice session will kick things off on Saturday, March 25 starting at 12 Noon, allowing racers the opportunity to test the race cars before the official start of the new season. Fans will also be able to see the new race equipment for the new season with free grandstand admission.

Race time on Opening Night will be 6 pm., and that again will be the starting time for all Saturday night programs for the month of April in 2023.

Race teams are reminded that they can have their engines sealed prior to the upcoming race season. To do so they can contact Charles Haas at 610-823-8783 for information or to set up an appointment. The cost of sealing the engines has increased for the first time in many years, with the increased costs of travel and the seals, the engine sealing will now be $225.

Members of the media who wish to cover events at Grandview Speedway in 2023, are asked to visit the speedway website at www.grandviewspeedway.com click on the rules/forms tab, fill out the media application and return it to Tina Rogers no later than February 28, 2023. Thank you very much to those who covered the events in 2022.