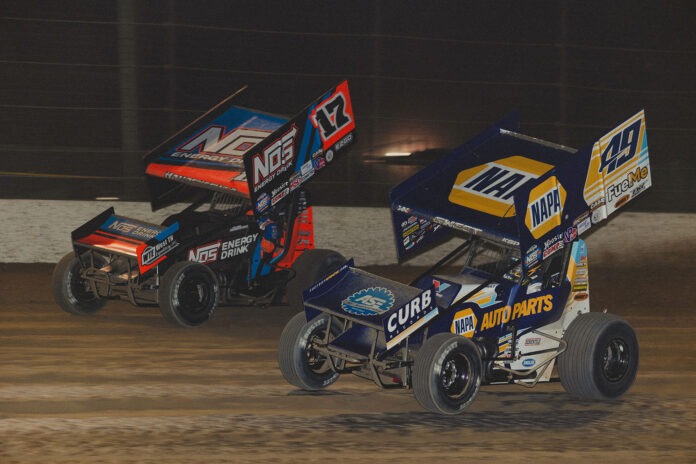 The traditional trip to Florida in February again begins with two nights of the All Star Circuit of Champions (Feb. 7-8) followed by the World of Outlaws NOS Energy Drink Sprint Car Series on Thursday-Saturday, February 9-11.

It marks the first of five consecutive shows for The Greatest Show on Dirt at the Barberville, FL 1/2-mile – with the Series slated to return for a Daytona Bike Week special three weeks later on Sunday-Monday, March 5-6.

With the prestigious DIRTcar Nationals Big Gator Championship and an expanded $20,000-to-win, $1,500-to-start finale purse on the line, fans can expect to see the biggest and best names in Sprint Car Racing battling for the gator trophies at the “World’s Fastest Half-Mile.”

Schatz, a 10-time Series champion, returns to Volusia as the winningest Sprint Car driver in DIRTcar Nationals history with 22 wins to his credit. The Fargo, ND native hopes to start 2023 the same way he ended 2022 – back-to-back wins in the Ford Performance, Advance Auto Parts #15 – with more Victory Lane appearances.

Among active drivers, four-time and defending World of Outlaws champion Brad Sweet is closest to Schatz with eight DIRTcar Nationals wins on his resume. The Kasey Kahne Racing, NAPA Auto Parts #49 team could join Schatz and “The King” Steve Kinser in the five consecutive titles club in 2023.

The 2021 Big Gator Champion, Logan Schuchart, is a three-time winner himself at Volusia Speedway Park. The Shark Racing star returns to the scene in 2023 fresh off the winningest season in team history with a combined nine Series wins from him and his teammate/uncle, Jacob Allen.

David Gravel and Carson Macedo, both championship podium finishers in back-to-back years now, have made DIRTcar Nationals breakthroughs since aligning with their respective new teams at Big Game Motorsports and Jason Johnson Racing.

Additional stars with former Volusia Speedway Park wins include Sheldon Haudenschild, Aaron Reutzel, Jason Sides, Kerry Madsen, Wayne Johnson, Kraig Kinser, and Kasey Kahne, all of who are likely to contend for another when the gators come to play in February.

If you can’t make it to the event, the entire 2023 season will be live on DIRTVision – available either online or through the DIRTVision App.