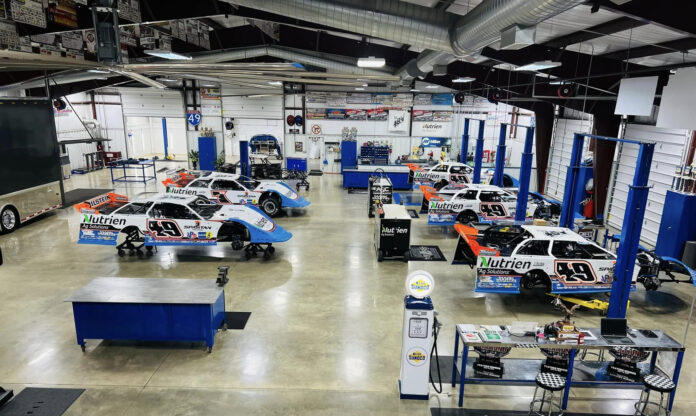 BATESVILLE, ARK -In 2022, Jonathan Davenport and Double L Motorsports made the hard decision to not follow the Lucas Oil Late Model Dirt Series full time in an effort to be more prepared for the high-paying crown jewel events and for the larger paying shows. That strategy proved to pay massive dividends, as Jonathan amassed 24 victories, 55 Top Fives, and 69 Top Tens in 81 races on his way to accumulating over $2 million dollars in season earnings. Following the record breaking 2022 campaign, the Batesville, Arkansas-based team has shifted gears and has announced today their intentions of following the Lucas Oil Late Model Dirt Series again in 2023 to vie for Jonathan’s fourth National Championship with the tour.
Double L Motorsports, which will kick off their 2023 season in a matter of weeks during the unsanctioned ‘Wild West Shootout’ at Vado Speedway Park in Vado, New Mexico from January 7-15, will start the Lucas Oil Late Model Dirt Series grind from January 26-28 during the ‘Super Bowl of Racing’ at Golden Isles Speedway near Brunswick, Georgia. Between then and the series-ending ‘Dirt Track World Championship’ at Eldora Speedway in Rossburg, Ohio on October 20-21, the tour will sanction 56 events at 32 different tracks in 16 states. Along with the over $5 million dollars in purse money up for grabs, the series recently announced a gargantuan $1 million dollar point fund with $200,000 earmarked for the Champion.
“We are excited to announce today that we are returning to the Lucas Oil Late Model Dirt Series full-time in 2023,” quoted Davenport in a recent telephone conversation. “It just didn’t fit our best interest to follow that deal last year, but I’ve always enjoyed racing with the Lucas Oil Late Model Dirt Series and look forward to competing for another Championship this season. We have some new crew guys on board this year and they would go racing every day of the week if it was possible, so they are really on board to chase a title.”
“Also, the series really worked hard on some things like minimizing their schedule a little bit and boosting their point fund, which made it more attractive for us to jump back on tour,” Davenport, who has 65 career series wins on his illustrious resume, went on to say. “I think the years that I won the Championship (back in 2015, 2018, and 2019), it paid like $75,000 and that is what fifth place gets this year, so kudos to everyone with Lucas Oil for allowing us all to race for more money!”
As Jonathan eluded to – the Double L Motorsports team will have a couple of fresh faces in the pit area this season. Cory Fostvedt has been hired as the Crew Chief for the #49, while Michael Bixby is the new tire specialist. Vinny Guliani will return as the Team Engineer for Double L Motorsports, which has recently moved to the Batesville, Arkansas race shop owned by team owner Lance Landers. The team is also excited about a couple of new marketing partners – Dyna-Gro Seed and Lucas Oil Products – coming on board this season to join Nutrien Ag Solutions, ASC Warranty, Mark Martin Automotive, Mega Plumbing of the Carolinas, Longhorn Chassis, Bilstein Shocks, VP Racing Fuels, Midwest Sheet Metal, and the long list of valued product supporters.
The latest news and information concerning Jonathan Davenport and Double L Motorsports can always be found online at www.JonathanDavenport.net. Purchase the latest #49 apparel and merchandise safely and securely online at www.49apparel.com. Follow the team across several different social media platforms at facebook.com/JonathanDavenportMotorsports, twitter.com/thefast49, and instagram.com/thefast_49.
Media Contact: Ryan Delph – Delph Communications
www.DelphCommunications.com