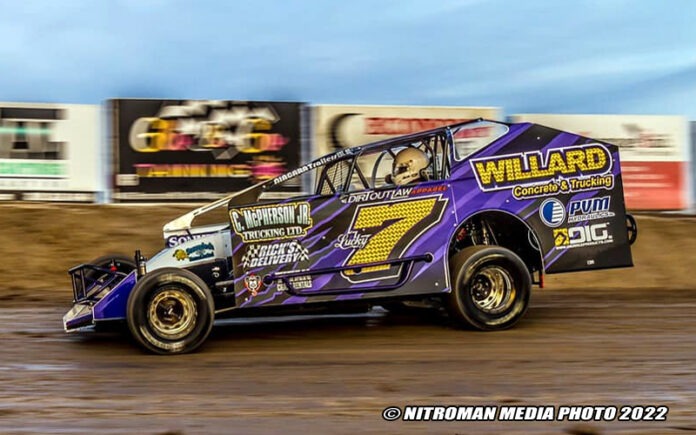 WEST HAVEN, VT: Part of Cody McPherson’s wildly successful racing season in 2022 was taking a shot at his first ever King Of Dirt Racing Series crown. To do so, he’d have to conquer Merrittville Speedway where competition is stiff on Saturday night. He captured eight feature wins at his weekly stomping grounds and fell just 12 points short of the KOD title.

Despite being one of the most potent drivers wheeling a Sportsman Modified today, McPherson kind of flies under the radar. That’s because he shows up, and shows out. Not much for drama or flamboyancy, Cody embraces an old Raiders saying, “just win baby.” And he does so one race at a time without the pressure of expectations or goals. How did we figure that out? He said so.

“I’m not one to really set goals. I just always go one race at a time and try to win each race that I’m in. That’s it,” McPherson told Michalina Friss in a recent DIRTcar press release.

Now, that may be hard to fathom coming from a guy who wins as much as Mcpherson does, but no joke intended, he’s basic. As in this successful racer actually practices the KISS method, which he explains to fellow competitors that tend to not believe him. Don’t take our word for it, let him explain.

“Lot of people don’t believe me, but whatever racetrack I’m at, I show up with the same exact setup in my car with the same four shocks and the same four coils,” McPherson explained to Michalina Friss in the same press release recapping his DIRTcar success.

For a shot at the King Of Dirt Racing Series title, he needed his best 12 finishes from one track. While he registered both Merrittville and Humberstone, his Saturday night track was focus, as Humberstone adjusted their schedule due to shortage of tires and rising fuel costs. Didn’t stop Cody from racking up dubs, as he earned his first of eight wins at MTV on April 30, 2022.

Those eight wins were enough to help him secure the Merrittville track title, and catapult him up the KOD leaderboard keeping pace with Matt Janczuk. He also earned four runner up finishes to go with his wins giving him a total of 1388 points on the season. Any other season, that’s the keys to kingdom. In 2022 it earned him second in the overall final standings.

Cody kept his name in the headlines all season long, as not only a KOD contender but the St. Catharines, ON Canada racer also four track championships (Merrittville, Humberstone, Oshweken, and Weedsport), won the Hoosier Tire Weekly Series title, dominated the Chevrolet Performance 75 at Oswego Dirt Week, and won the DIRTcar Sportsman series title.

When a driver wins that much, he must have a chip on his shoulder yeah? Wrong. Cody McPherson stays grounded and admits, “in this sport, you’re only as good as your last race.”

“Cody was the top Canadian racer on tour and the perfect example of why our program works so well for drivers. You can run any kind of tire, fuel, rules package, or be from a neighboring country to the US and contend for the crown. He’s also very chill for a guy who wins as much as he does, and honestly, we like that,” said KOD Competition Director of Points and Scoring Rob Hazer.

SPORTSMAN KOD CHAMPIONSHIP NOTES: Cody McPherson finished runner up for the 2022 KOD crown, but will surely contend once again in 2023. Championship hardware and all point fund monies for participating divisions will be mailed out after the holiday season, as no formal banquet is scheduled this season. Special thanks to Mike Walton with Fastline Performance and Mike Jackson with Swagger Factory Apparel for their continued support of KOD Sportsman Modified action in 2022.