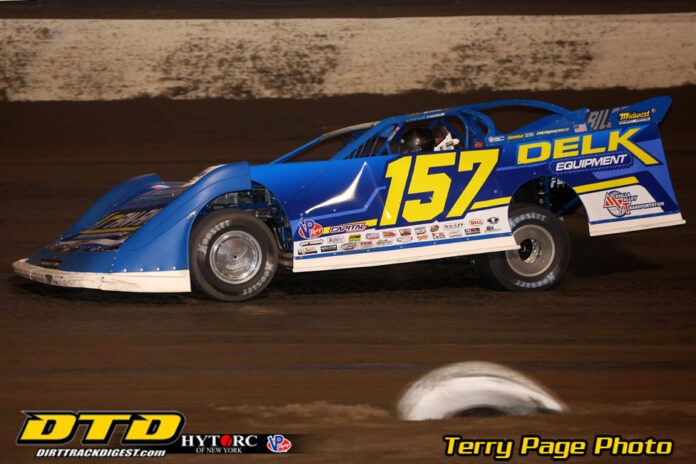 “I was ready to come out here and put it on these guys,” Marlar said. “It’s been a rough week so far. It’s a humbling sport. It’s really tough, a lot of good competitors. It’s always tough, you know?”

Fortunately for Marlar, those words were delivered in a much nicer setting on Saturday at Vado (N.M.) Speedway Park, as the Winfield, Tenn., veteran outpaced Jonathan Davenport and Kyle Larson to win the miniseries penultimate race worth $10,000.

Marlar, who is last year’s Wild West Shootout champion, hasn’t been all that far off to begin the 2023 season. It’s just he’s expected more than his finishes of eighth, sixth, fifth and seventh to begin the week.

“Man, been a long week so far,” Marlar said. “Happy to get a win there. It was fun racing.”

What made Saturday’s feature enticing was the fact that Marlar ran down and passed Davenport, the winner of the first three Wild West Shootout Dirt Track Bank Super Late Model division presented by Black Diamond Racecars races, with 14 laps to go and then staved off a charge from Larson, who erased a 1.6-second deficit with four laps remaining to attempt a last-corner slide job rounding for the checkers.

While Davenport, Larson and early contender Bobby Pierce committed to the uppermost part of the track most of the race, Marlar exploited a groove two lanes off the very top that no driver could seemingly duplicate.

Larson, who started 11th, made his way to fifth with 12 lap to go when a caution for 14th-running Billy Moyer gave the NASCAR star a fine shot at the win. As Pierce threw a slide job on Davenport into turn one on the restart to briefly regain second, Larson one-upped them both by finding a window of opportunity around the bottom.

“I was hoping we would get a caution there when we did,” Larson said. “I kind of figured Bobby would throw a slider or something into one on the restart, and if I plugged the bottom a couple laps, maybe things would work out. And it did.”

Larson officially dispatched Pierce for second with seven laps to go, as Pierce lost control of his Longhorn Chassis in the midst of the tense battle for second through turns three and four.

“I was able to show my nose at the right time and he got over the cushion in four to get to second,” Larson said. “I put together some good laps. Made one mistake as soon as I got to second in three and four, and lost like a straightaway on (Marlar). I had to plug away trying to get back to him.

“I think if I hadn’t made that mistake, it’d be a different result. But he was obviously getting signals and running a lane where it was going to be difficult to make a move on him once I did get right to him, which I did the last lap there. Fun race again and another good car.”

The caution for Moyer with 12 laps left was the lone stoppage of the race. Eight laps prior to that, Davenport held a one-second advantage over Marlar at the halfway mark and appeared on his way to banking a $25,000 portion of the Penske Racing Shocks Paydirt Jackpot with his fourth win of the week.

But Davenport, who eventually finished fourth behind Ricky Weiss, couldn’t navigate lapped traffic as fluid as earlier in the week. A rare mistake along the turns one and two cushion on lap 27 caved Davenport’s chances as Marlar generated the go-ahead run through the middle of the corner.

“I got in a really good race with Jonathan there in lapped traffic. It just worked out for me,” Marlar said. “His car got a little loose in that air, more than mine, I feel like. It worked out, got by him there. Then, at the end of the race, lapped cars really were helping me.”

Weiss, meanwhile, came from seventh to keep his run of top-sixes going. The Headingley, Manitoba, native doesn’t have much to nitpick about a ledger that includes finishes of third, fifth, fourth, sixth and third.

“We were just picking our way up to the front there,” Weiss said. “Larson got by me and I tried to follow him. He took off for a little bit. We started reeling him back. I was questioning how this guys were making these tires work. That caution, I was like, we’ll see right here. You could tell (Pierce) and (Davenport), their stuff kind of gave up a little bit. They’ve been so good this week, so it’s good to get by them, and get up near the front.”

In Shocker Hitch X-Mod competition presented by Barnett Harley-Davidson, Kris Jackson decimated the field from the second-starting spot in the 25-lap feature. The Missouri driver bagged his third win of the week and the $1,000 top prize. He crossed the finish line 4.894 seconds in front of Jimmy Ray with Mike Striegel, Lucas Rodin, and Gabe Hodges completing the Top-5 finishers.

Jackson is eligible for a $2,500 bonus from Arizona Differential by Nate if he can win Sunday night’s finale.

Taking control of the lead on the fifth lap of the feature Dereck Ramirez rumbled to his third victory in the Mesilla Valley Transportation / Border Tire Modifieds presented by Ranch Milagro. Tyler Wolff led the first four laps of the feature before Ramirez assumed control.

Ramirez raced away from the field to score the victory over Tyler Davis, Tyler Wolff, Darron Fuqua, and Rodney Sanders.

The miniseries draws to a thrilling conclusion on Sunday, Jan. 15 with the sixth-and-final round. The festivities will be headlined by the $25,000-to-win Rio Grande Waste Services 50 presented by Shaw Trucking for the Dirt Track Bank Super Late Models presented by Black Diamond Race Cars. Additionally,, the Mesilla Valley Transportation / Border Tire Modifieds presented by Rancho Milagro ($2,000-to-win), and Shocker Hitch X-Mods presented by Barnett Harley-Davidson ($1,000-to-win) share the day’s spotlight.

Reserved seating is only available online and can be purchased at www.wildwestshootout.net/buy-tickets/ for $35 per ticket.