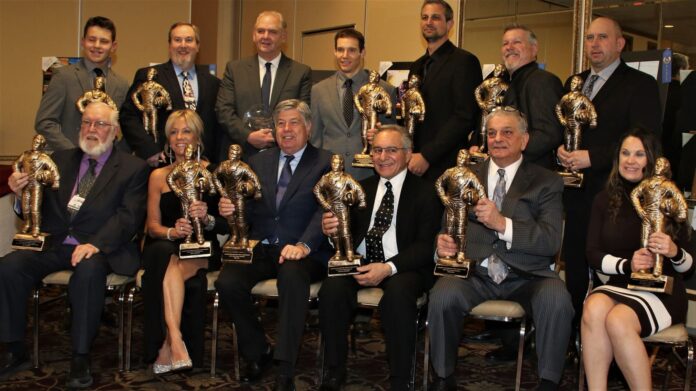 Wilkes-Barre, PA-In keeping with its goal of providing information, education and entertainment, the Eastern Motorsport Press Association (EMPA) celebrated motorsports at the Genetti Best Western Plus Hotel and Convention Center in Wilkes-Barre, PA this past weekend. While in its 54th year of existence, members and supporters gathered for the organization’s 50th convention.

The Saturday night banquet highlighted the weekend, where many EMPA members and others received honors for their involvement in motorsports. Six individuals were inducted into the EMPA Hall of Fame. They included Frank Rio, whose family was on hand to accept for the 96-year-old racing pioneer. Bobby Marshman’s son sent a letter of thanks for honoring his late father 59 years after his untimely death. Steve Kinser, also unable to attend, was recognized for his tremendous Sprint Car racing career.

The late Greg Hodnett’s wife, Sherry, and his sister accepted the award for him. An emotional Sherry Hodnett said it’s an honor to accept any award for him, but this one is a great honor. EMPA also presented her with a donation to the Greg Hodnett Foundation.

Hall of Fame inductee Reggie Ruggiero provided some light-hearted comments on his great career in an asphalt Modified, even stating he passed on a Busch ride. He said Rusty Wallace ended up taking that ride.

And Mike Joy, now with Fox Sports, said he got hooked on racing at a young age and knew he had to be part of it. His many years of exceptional work in telling the story from an announcer’s perspective earned him his Hall of Fame award. Mike also gave special thanks to Bill Brice for sponsoring the photography contest. He said many watch or read about people in sports, but it’s those on the other side who need to be recognized for capturing great pictures that also tell the story.

By vote of the membership, several others received awards for excellence. Jonathan Davenport and Erica Enders won the Al Holbert Memorial National Driver of the Year awards for excellence on dirt and asphalt surfaces, respectively. Once again, it was a pair of drivers sharing the same first name who won the Richie Evans Memorial Northeast Driver of the Year awards. Matt Hirschman, asphalt, spoke of sharing his passion for racing, and being fortunate to have what he has in order to compete. Matt Sheppard, dirt, said his remarkable season finally sunk in on his way to the convention, when he realized what a terrific season he had and picking up an award named after the great Richie Evans. Logan Watt received the John Blewett III Young Gun, Presented by New England Race Fuels, Award. This goes to a driver under the age of 20, in recognition of an outstanding season.

EMPA honors the late Junie Donlavey with a Sprit of the Sport Award. This year’s winner was Tom Wanick III for his efforts both on the track and in the greater Hazleton (PA) community. Brett Deyo won EMPA’s award for outstanding racing promotion. EMPA members, Matt Thomas and Mel Thomas, received the Ernie and Marilyn Saxton Award for outstanding service to the organization. EMPA President, Dino Oberto, presented President’s Awards to Debbie Gastelu and Diane Pursell Tracy for their work overseeing the photo contest each year.

In addition to the Brice’s NAPA Auto photo contest, whose winners are listed below, Pete MacDonald and Harry Meeks had exceptional years for which they were rewarded. MacDonald received both the Janice Brice Memorial Award and the Mary and Howie Hodge Memorial Award for the same photo. It was a trifecta, of sorts, for MacDonald, who earlier had won election as a new EMPA Board member. Meeks, by vote of the membership, won the Ace Lane Memorial Photographer of the Year Award.

World Racing Group annually honors an EMPA member for their contribution to Sprint Car racing. The award is named in memory of the late Jerry Reigle, an award-winning EMPA member. Jack Kromer received this special award during the banquet.

EMPA writers compete for prizes in the Pocono Raceway writers’ contest. Those winners are also listed below. The EMPA membership honored Jason Beck, Managing Editor of Speedway Illustrated magazine, as the Jim Hunter Memorial writer of the year.

The 50th convention actually kicked off on Friday, with the annual Salute the Champions night. Drivers who won titles at area racetracks were on hand for interviews and networking. Some returned for the second time, while other were there for the first time. Isabel Barron, the first-ever female champion in the 57-year history of Woodhull (NY) Raceway attended as the track’s 602 Crate Sportsman champion. Andrew Yoder, another driver attending for the first time, won the Late Model title at Selinsgrove (PA). The father/son duo of Ryan Godown and Ryan Godown, Jr. won titles but also won their respective features five times in the same night.

On Saturday morning, while a trio of judges struggled with well over 100 boards submitted by 18 photographers in the Brice’s NAPA Photography contest, others attended press conferences. Jim Bernheisel announced the upcoming Appalachian Mountain Speedweek, a Super Late Model series of eight races at seven tracks. The series kicks off on Friday, June 9th and concludes on Sunday, June 18th. Stephanie Moyer, a former champion at Evergreen (PA) Raceway and UNOH graduate, spoke about running the ARCA series in 2022. Rich Tobias, representing Bloomsburg Fair Raceway and Action Track USA spoke of the importance of attracting and retaining race fans. And, while Tim Light was there representing the Mid-Atlantic Modifieds, it was his engineering background that intrigued the crowd. Among his creative endeavors was the design of the Batmobile.

Following lunch, sponsored by Dover Motor Speedway, Karl Fredrickson, EMPA Board member and Publisher of Speedway Illustrated magazine, led Mike Joy in a discussion of racing media in 2023. Joy, who would later be inducted into the Hall of Fame, entertained and informed attendees on his years behind the microphone. He spoke how the internet, social media, and computerized scoring have all served to change how racing is presented to the public.

Oberto, reelected by the membership to another term on the board, held a brief meeting on Sunday morning to wrap up the 50th EMPA convention.

3rd Bruce Bennett, “From Nazareth to NASCAR…Short-track racer Jimmy Horton has done it all”, Speedway Illustrated