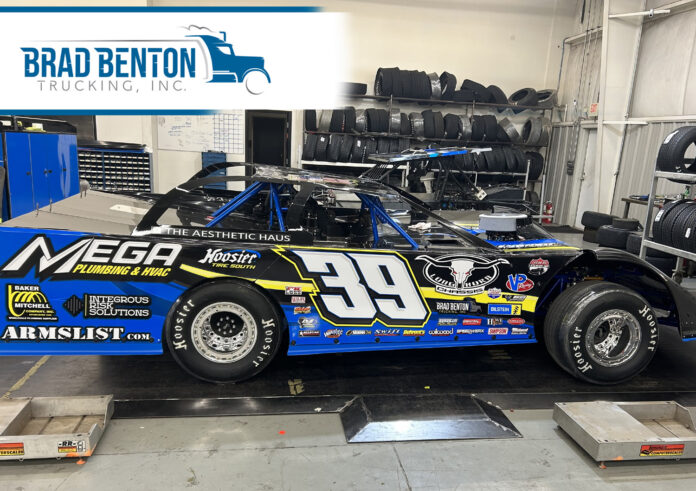 BURLINGTON, NC-The 2023 racing season is right around the corner and Paylor Motorsports is thrilled to welcome Brad Benton Trucking on board as a marketing partner!  Since their founding in 1996, Brad Benton Trucking, Inc. has been known for running quality equipment and for taking excellent care of their drivers.  They offer a top notch pay and benefit package because they know that when their drivers are happy, everything runs better.
Regional and long runs are available out of both Kernersville and Charlotte, North Carolina.  Learn more about Brad Benton Trucking by pointing your Internet browser to www.bradbentontrucking.com.
“We are very excited to join Paylor Motorsports for the 2023 season and for the racing action to get underway,” commented owner Brad Benton.  “To be a part of a Lucas Oil Late Model Dirt Series Championship team as they gun for their third straight series title is something very exciting for us.  With both Paylor Motorsports and Brad Benton Trucking based in North Carolina, it is a perfect situation for all parties involved.  We wish Tim (McCreadie) and Paylor Motorsports nothing but the best as they kick off their season this weekend in Florida!”
Watertown, New York superstar Tim McCreadie and the #39 Paylor Motorsports team will officially start their 2023 campaign from January 19-21 in the ‘Sunshine Nationals’ at Volusia Speedway Park in Barberville, Florida.  The three-day World of Outlaws Case Construction Late Model Series weekend will be headlined by a $20,000 to win grand finale on Saturday evening.  Watch all of the action from the Daytona Beach-area speedplant LIVE on DIRTVision or learn more about the ‘Sunshine Nationals’ by clicking on www.woolms.com.
The 2023 Lucas Oil Late Model Dirt Series schedule will then get underway with the ‘Super Bowl of Racing’ at Golden Isles Speedway near Brunswick, Georgia from January 26-28.  The Paylor Motorsports team will look to get off to a fast start with the national tour in the trio of high-profile races in the Peach State, as they will be following the entire series schedule to defend their 2021 and 2022 series titles.  Following races that will pay $10,000 and $12,000 to win at GIS, the ‘Super Bowl of Racing’ finale on that Saturday will boast a whopping $25,000 first place prize.
From there, the Lucas Oil Late Model Dirt Series will sanction a pair of events at Bubba Raceway Park in Ocala, Florida on January 29-30, two more showdowns on February 3-4 at All-Tech Raceway in Ellisville, Florida, and six programs during the ‘Winternationals’ at East Bay Raceway Park in Gibsonton, Florida from February 6-11.  Watch each night of Lucas Oil Series competition LIVE on FloRacing or learn more about each venue online at www.lucasdirt.com.
The #39 team will then wrap up their 2023 “Speedweeks” journey from February 13-18 back at Volusia Speedway Park in Barberville, Florida.  DIRTcar Racing and the World of Outlaws Case Construction Late Model Series will both sanction contests at VSP with the six-race week culminating in a $20,000 to win finale on that Saturday night.  View all of the tentative schedule dates for Paylor Motorsports by logging onto either www.TimMcCreadie39.com or www.PaylorMotorsports.com.