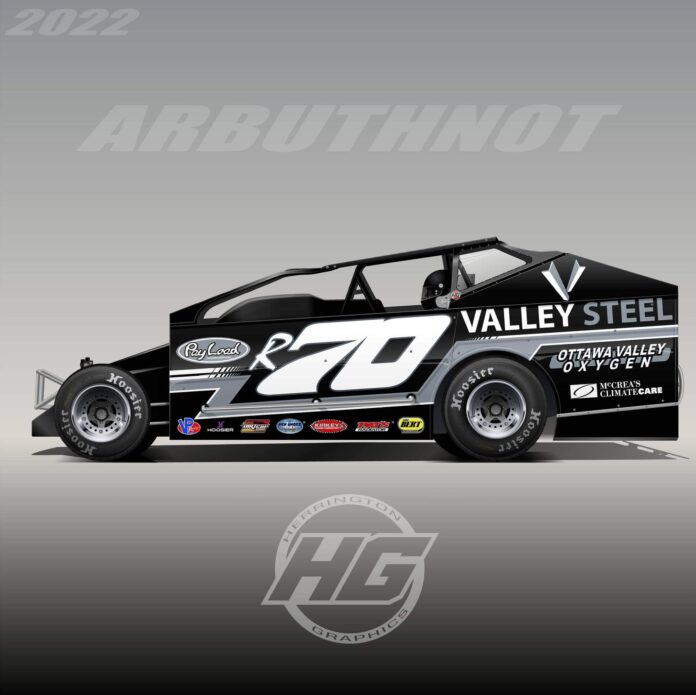 Canadian Modified driver Ryan Arbuthnot isn’t a regular in the Big Block Modifieds, but he is one of the new faces headed to the Sunshine State for the DIRTcar Winternationals at Volusia Raceway Park.

The 358 Modified division has been his stomping ground for quite some time, but he is really looking forward to stepping it up in Florida when the non-point Super DIRTcar Series events are fun in February.

Brockville, Cornwall, Brighton, Mohawk and other 358 tracks see him as a regular competitor. However, for the moment, it is time for a change.

Talking with Dirt Track Digest, Ryan said, “I have a bucket list of a few races we’d like to hit and this year things just lined up to make Volusia a reality.”

Does this mean he might be a new face on the SDS Tour?

“We won’t be running the entire Super DIRTcar Series,” said Ryan, “Work and family make it impossible to commit to the schedule. We will just run select races that come close to our area.”

The Renfrew, Ontario driver isn’t exactly a rookie when it comes to Big Blocks as he said, “We have Big Block experience and ran a full season at Canandaigua (LOL) in 2015. Since then we’ve keps the Big Block engine and usually try to hit between five and ten Big Block races every year.

The new black-white look is a change from last year as Arbuthnot explained, “Bobby Harrington has been doing our design and wraps the last few years and has been doing an excellent job.”

He said, “A huge thank you goes out to our sponsors, family and crew who have stepped up to make this happen. This wouldn’t have been possible without them.”

So racing will start much earlier this year for Ryan Arbuthnot Racing, but he hopes it will be a memorable trek to the Sunshine State.