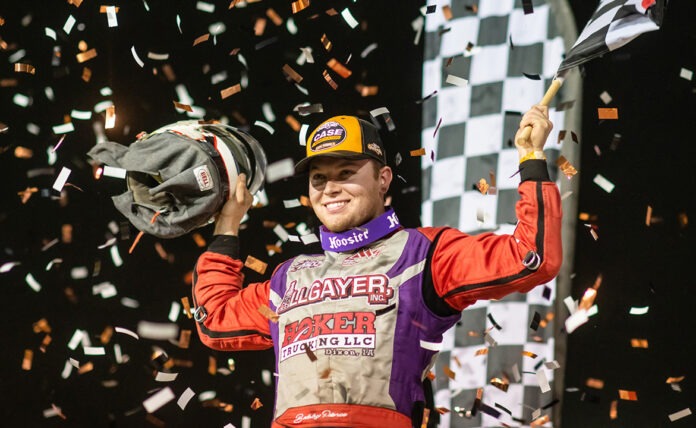 CONCORD, NC – The World of Outlaws CASE Construction Equipment Late Model Series’ 2023 season continues to build into one of the most exciting yet with the addition of Bobby Pierce to the tour.

“The Smooth Operator,” of Oakwood, IL, will run his first full season with the Series, bringing the 2023 roster to 16 drivers competing for the Series title – worth $175,000 between the points purse and Winner Circle program.

“It’s just exciting to be a part of it,” Pierce said. “It’s something I haven’t done very much of in my career. I kind of just bounce around a lot, but we’re looking forward to it. We’re going to see how it goes and take every race with a grain of salt as the races come and go and hopefully, we can knock off a lot of wins.”

Between the Hell Tour, which runs from June through July in the Midwest, and growing up in the region with his National Dirt Late Model Hall of Fame father, Bob Pierce, the 26-year-old has molded himself into a master of Midwest tracks.

Two facilities he already has highlighted on his 2023 World of Outlaws schedule are Farmer City Raceway and Fairbury Speedway in Illinois. He won his first World of Outlaws race at Farmer City in 2021, and while he has multiple wins at Fairbury, he’s still searching for his first Prairie Dirt Classic triumph – a race his father has won five times.

Like the Hell Tour events, his father will continue to be by his side throughout the entire 53-race World of Outlaws schedule. Bob Pierce has been Bobby’s crew chief for each of this 47 Summer Nationals victories and Bobby gives his father most of the credit for the success they’ve had.

“I couldn’t do it without my dad, starting me at an early age and really building my talent,” Bobby Pierce said after winning his fifth Hell Tour title.

He’ll start his 2023 venture with the World of Outlaws at Volusia Speedway Park for the DIRTcar Sunshine Nationals, Jan. 18-21. Pierce has made six previous starts with the Series at Volusia, claiming a career best finish of second at the track in 2021.

While this will be only his second time running 50-plus races with a national touring series, he’s excited for the challenge.

“I know this year is going to be, heading into it, a learning curve for us, since we have new Longhorns,” Pierce said. “But we started off good in Vado (winning at Vado Speedway Park). We’re going to carry momentum into Volusia and just see how it goes for us. I know it is a long year, a lot of traveling, but we do that all the time anyways, so, we’ll just see how it goes.”

To watch Pierce, compete on the World of Outlaws CASE Construction Equipment Series tour, follow the Series schedule and get tickets, HERE.

If you can’t make it to the tracks, you can watch every race live on DIRTVision.