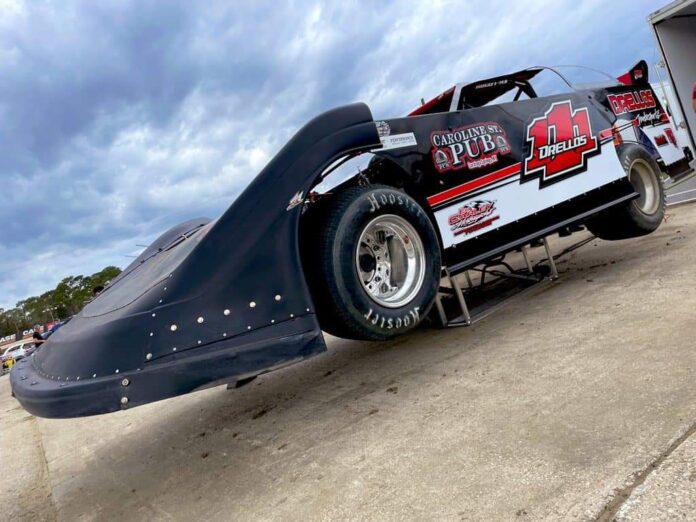 Demetrios Drellos is noted as  a Big Block “Beasts of the Northeast” Modified driver.

However, as the latest edition of the Sunshine Nationals unfolded at Volusia Raceway Park he found himself in a rather unfamiliar position.

There were 66 other DIRTcar Pro Late Model drivers entered for night one as they not only faced off against one another, but under a unique time trial-feature format.

When the dust had settled Drellos had finished runner up to Michael Page, just 1.6 seconds off the pace.

He adapted quite quickly and after the feature talked to Dirt Track Digest.

In regards to his shift from Mods to Late Models, he said, “Other than the fact that these are a blast to race I’m not exactly sure why I seem to drive this type of car so well. I’ve never raced anything sitting on the left before and the cars handle extremely differently compared to what I’m used to driving. It does help that I have really good help. Ed Carley truly has accelerated our small Late Model program into being competition right off the back.”

What were his hopes entering the Sunshine Nationals?

Drellos explained, “We were hoping just to have a good night tonight, just get a good finish and learn as much as possible about these race cars. After time trials we knew we really had a good car. We were happy with the adjustment we had made in practice the night before.”

He had started up front by virtue of a solid time trial and was in contention throughout.

Runner up was the end result and reflecting, Drellos noted, “After the feature we were even more happier. We were a little snug in the feature, but of course it is very difficult to make the right adjustments when you have zero seat time and minimal racing laps. But, overall I am extremely happy with second. The track this year at Volusia has been a bit narrower than usual. It’s been extremely fast the past two days. Even fast for Volusia standards.”

Volusia isn’t exactly a foreign track for the Eastern New York driver as he explained, “I think racing here in our Big Block definitely helped me racing here at Volusia. I’ve been here a few times and even though I’ve had successes here in the Big Block laps are laps and being familiar with the track helps.”

So Drellos and his team will continue competition, but will log many miles before Florida Speedweeks are over.

Demetrios said, “We will be finishing up the Sunshine Nationals, then driving home, getting our Big Block stuff and coming back down for the Modified races here at Volusia.”