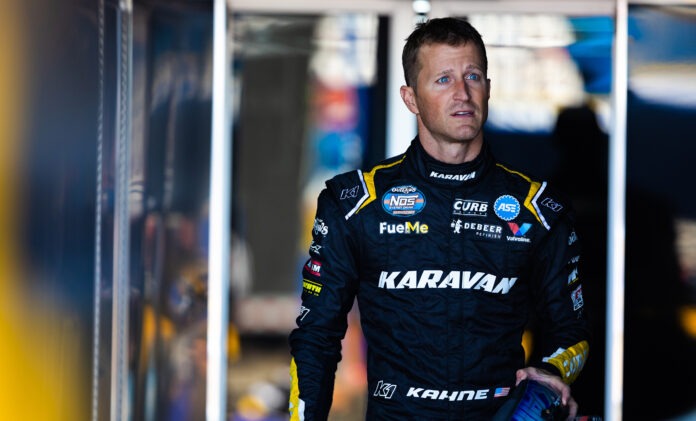 MOORESVILLE, NC –Kasey Kahne’s legacy with the World of Outlaws NOS Energy Drink Sprint Car Series will continue growing in 2023 as he returns to full-time competition with The Greatest Show on Dirt.

Signing on for his second season with the Series, the 42-year-old superstar from Enumclaw, WA will again pilot the Kasey Kahne Racing, Karavan Trailers, FuelMe #9 this year. With 80+ races planned from February to November, the coast-to-coast World of Outlaws tour will take Kahne from the Florida sunshine to the Pennsylvania Pigeon Hills to his native home in Washington, and everywhere in between.

After a trying attempt at the Kevin Gobrecht Rookie of the Year Award in 2022, Kahne is hopeful for a simpler sophomore showing with the goal being more triumphs than tribulations in 2023.

“I feel really, really good,” Kahne admitted. “I’m excited to go full-time Sprint Car Racing again this year and I feel like personally, I got a lot better last year going this route. We definitely had a lot of ups and downs during 2022, so I’m hoping for a much smoother and more successful season this year.

The ups of last year were certainly great – leading laps and recording his first-career podium at Huset’s Speedway – but the downs did leave their mark. Hard crashes at tracks like Volusia Speedway Park, Eldora Speedway, and Jackson Motorplex – all at the ‘wrong place, wrong time’ – unfortunately forced Kahne onto the sidelines for a combined 27 events through the spring and summer.

Undoubtedly, though, the speed was there; and Kahne is feeling more confident than ever after running his largest dirt racing schedule in almost two decades. The goal now for 2023 is quite simple – win, win, and win.

“Getting that first [World of Outlaws] win is obviously at the top of our bucket list, and it would be huge,” Kahne added. “We’ve been fortunate enough to win so many races with so many drivers at KKR, but I want to be on that list too. It feels incredibly rewarding to win as an owner considering all I’ve put into the sport and continue to put into it, but purely as a race car driver, I want to win myself. It’s been a while since I felt that and that feeling is why we do it, it’s why we love racing.”

Kahne’s quest for his first-career World of Outlaws win begins with the season-opening Federated Auto Parts DIRTcar Nationals at Volusia Speedway Park on February 9-11. Through 26 appearances at The World’s Fastest Half-Mile, Kahne most notably scored a 2002 All Star Circuit of Champions win and established his World of Outlaws career-best at the track with a ninth-place finish in 2021.

Justin Adams will return as Kahne’s crew chief in 2023, along with crew members Brad Tunny and Payton Gries.

To watch Kahne and the rest of the Outlaws all year long, get tickets HERE or watch every race live on DIRTVision.