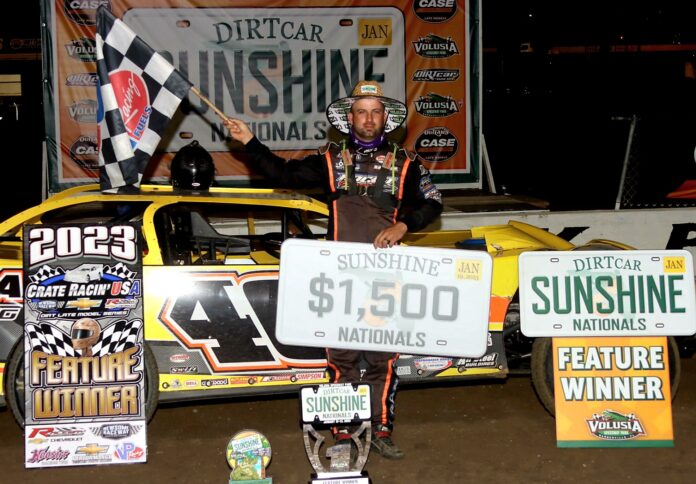 In the end, Ross Bailes, Kyle Bronson, Michael Page and first-time winner Rye Faulk emerged victorious in the division’s four Qualifying Features, each earning $1,500 checks and a maximum 75 points in the event standings. After Friday’s program, run identical to Thursday’s, is complete, the top-20 in points will be locked into Saturday’s Feature and go 30 laps for a shot at the big check.

Bailes, the Super Late Model ringer from Clover, SC, entered a one-race deal with Mt. Airy, NC-based team Koehler Motorsports for the weekend, and has made it count thus far. He set the fastest overall time in Qualifying earlier in the evening before going on to the wire-to-wire victory without much challenge from behind. 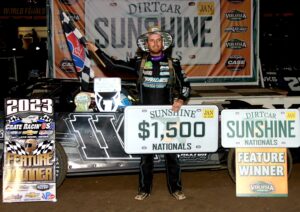 “It was really good in Qualifying,” Bailes said. “I thought the track would slow down a bit, so we tightened it up, and we made the wrong adjustments. Probably should’ve just left it alone, and I think it would’ve been even better.”

Local UMP Modified star Garret Stewart clawed back from a blown engine in practice on Wednesday, borrowing a spare power plant from fellow Floridian racer Jason Garver and driving from 12th to finish the night in seventh.

Starting third on the grid, the Brandon, FL-driver stayed patient in the 20-lapper, picking off second on Lap 6 before the yellow was thrown three laps later. This restacked the field and put Bronson on the tail of fellow Late Model ringer Cory Hedgecock for the restart.

Bronson stayed with Hedgecock on the ensuing restart, and finally pulled the trigger on a slide job pass for the lead in Turn 4 on Lap 12.

“I was watching [Hedgecock], and he kinda missed the bottom there on a couple laps while protecting,” Bronson said. “It makes it a lot easier running second, sometimes, than it is leading the race. Cory’s a real good racer, and I’m pretty sure he’s gonna be good all week here.”

Bronson never relinquished the top spot and drove it back to the checkered to collect a record sixth career Sunshine Nationals Feature win.

After a dull result in Qualifying early in the night, Michael Page rebounded into Victory Lane by night’s end, driving from 14th on the starting grid to the lead in less than 10 laps.

Page, the 2021 Sunshine Nationals Feature winner from Douglasville, GA, surprised the entire field, including himself, with the poor result in Qualifying, which set him so far back on the starting grid. But at the drop of the green in the Feature, all seemed to have been fixed. 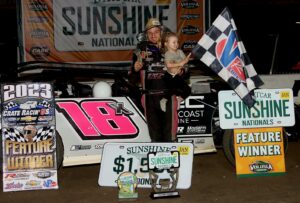 “I tried something that I thought I was doing right, and it was completely awful, worst thing I ever did,” Page said about his car in Qualifying. “So, I just went back to what I had on it, but changed some stuff to make it better. And it was really good.

“I know how to go around here; I know how to do it. I’ve been pretty good here before, but I was just so bad in Qualifying, it couldn’t get any worse. Bad. Really bad.”

Page advanced six spots on the first lap and was riding fourth on Lap 5. A yellow flag was displayed on Lap 9, which restacked the field and put him on the top side for the next restart, now only two cars ahead of him.

Page passed for second on the restart, and then Demetrios Drellos for the lead one lap later. Now at the head of the field, Page ran away and hid, collecting his second career Sunshine Nationals Feature win and the $1,500 check.

Tennessee Super Late Model veteran Randy Weaver made a large climb through the field in the Hatcher’s Auto Sales team #6, going from 16th on the grid to a top-five before the checkered flag.

There’s a first time for everything, and young Georgian Rye Faulk got a big first-time win Thursday night, leading wire-to-wire for the first-ever Feature win in his dirt racing career.

Faulk, the 21-year-old Late Model rookie from Dublin, GA, had less than 30 starts in the car coming into this weekend. However, his lack of seat time did not stop him from dominating the final Qualifying Feature, as he held off Floridians Clay Harris and David Showers Jr. the entire distance to bag the $1,500 victory. 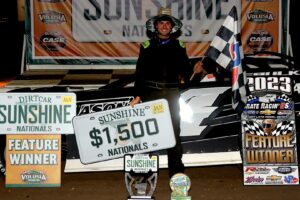 “It feels awesome,” Faulk said. “All my life, I’ve watched on TV and these Late Model guys get it done around this place. I’ve always dreamed of being here in this place, and here we are today with a Feature win.

“I could not enjoy it more.”

The DIRTcar Pro Late Model action continues at Volusia Friday night with a program mirroring Thursday night’s format, where more points will be awarded to the field before Saturday’s lock-in.

Tickets will be available at the gate. If you can’t be at the track, watch every lap live on DIRTVision.