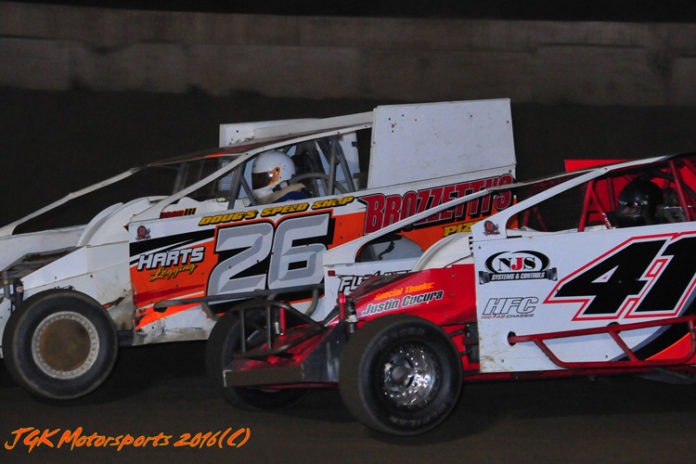 KIRKWOOD, NY – It’s official, after off-season speculation the Modified division at Five Mile Point Speedway will return to weekly racing with the “Sail Panel” bodies. Five Mile Point Speedway was the first area track to utilize the “sail panels” weekly on the Modified division back in 1992 and the return is expected to be a popular move. The first Modified event of the season is Sunday, April 9th with race number one of the Sunday Summer Slam.

He added, “I personally like the extra room on the bodies for sponsors but honestly had to be convinced to make the change. We had only one repeat Modified feature winner last season (Danny Johnson) and the clean racing was second to none so making this change was only after major consideration.”

Historically the “sail panels” originated at the old East Windsor Speedway (NJ) along with big drag rubber tires and wide open racing. The body style moved north to the “Outlaw Circuit” with Brewerton and Fulton Speedway’s utilizing the look in the late 80’s. Dan Harpell was the next to make the move to the “sail panels” in 1991 at Five Mile Point Speedway. The popularity of the body style today has grown but with that there has also been a great debate among fans whether they prefer the traditional “DIRTcar” bodies or the “sail panels”.

Recently, Five Mile Point Speedway conducted an informal poll on their Facebook page and the overwhelming response was to try the change for the 2017 on the Modified division. The new look will provide casual fans a distinction between the full blown Modified division and the Crate Sportsman class which will continue to run with the traditional body style. Last season two races were conducted for the Modified teams utilizing the sail panels and the car counts were 36 and 60 strong in those two events.


Andrew Harpell added, “Quite frankly we were the only area facility not running the sail panels weekly on our Modifieds. This will just make it easier on teams that want to run at more than one weekly track in our area.”

Modified teams will not be required to run the “sail panels” but will be permitted weekly to do so. The body heights will be identical to the other area tracks running the body style weekly. On a quarter mile track like Five Mile Point Speedway the sail panels can help or hurt a driver based on their driving style. Three years ago Kevin Bates won the Southern Tier Open event with a traditional body style while every other team in the field ran the sail panels. Let the debate begin!