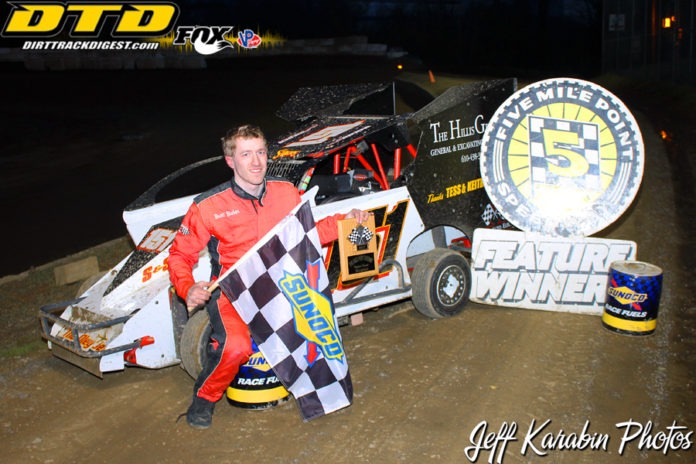 Andy Brigham and Chris Taylor led the field to the green in the 20 lap “Fantastic Five Front Wheel Drive Four Cylinder” event. Brigham a standout in the division at the speedway took command from the drop of the green. The dynamic brothers of Nick and Frankie Kennedy quickly raced to second and third during the early going as Sheldon Whitman and Dave Simms ran in the top five by lap 5. Simms started 17th in the field and was making quick work heading toward the front. Also charging to the front early was eventual race winner Ken Underwood. Underwood started 24th on the grid.

After a lap 5 caution things began to really heat up as the leaders raced two and three wide. On lap 13 Nick Kennedy worked past Brigham for the lead. Frank Kennedy continued to apply the pressure for second place with Brigham holding on to his outside line. On lap 15 Underwood had advanced all the way to third place after passing Kennedy. The caution flew on lap 16 as Brigham saw his great ride go up in smoke as he came to a stop on the speedway. On the restart Underwood quickly worked past Nick Kennedy for the lead. Underwood would go on to lead the balance for the first win in the “Fantastic Five Front Wheel Drive Four Cylinder” program. Nick Kennedy finished second with Frank Kennedy third and Dave Simms fourth. Sheldon Whitman completed his great drive with a fifth place finish.

The annual “Tommy Boy 20” for Factory Stocks saw Josh Towner race out to the initial lead in the 15 lap feature go. Buck Mills, Sr. took command on lap 3 but was quickly challenged by Lanson Albanese. Mills saw his evening end with mechanical problems on lap 11. Albanese took over the point but on lap 14 was forced pit side with a flat tire. Buck Mills, Jr. took command at this point and would never look back. Mills would be followed across the line by Charlie Towner, Albanese, Jason Rinker and Jason Thomas.

Bailey Boyd led the first 18 circuits of the 20 lap Xcel 600 Modified feature event as he looked for his first ever Five Mile Point Speedway victory. The young Kirkwood driver looked impressive throughout the event. A caution on lap 17 ultimately derailed he great effort. When racing went green on lap 17 Boyd raced to the outside line of the speedway and Aaron Bowes quickly dove down low. Bowes took advantage and moved past on the next lap. Bowes went on for the victory. Modified chauffer Byron Worthing made a late race pass to capture second at the wire with Boyd finishing third. Ritchie Hitzler and Jon Josko rounded out the top five.


Brett Bieber was the winner of the 20 lap Tobias Slingshot feature event. Bieber took the lead on lap 2 from Tess Horvath and would lead the remainder of the way. Taylor Mills, Justin Mills, Russel Banky and Brian Tobey, Jr. completed the top five finishers. 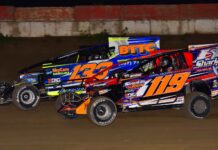