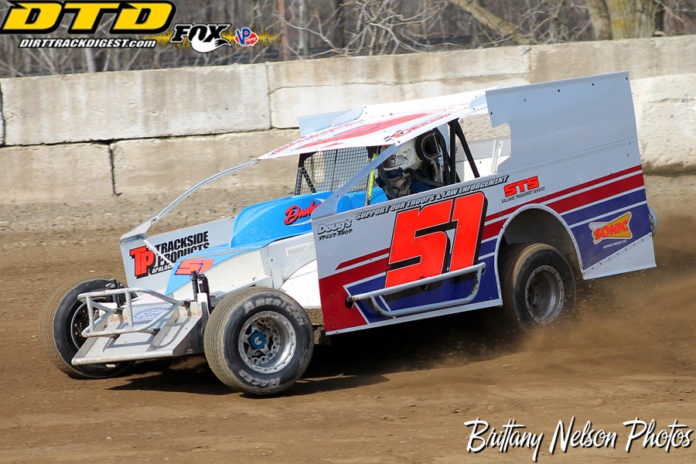 KIRKWOOD, NY – Mike Colsten shows no signs of slowing down as he was dominate on his way to recording the Modified Summer Slam opening day victory at Five Mile Point Speedway. The victory in the 30 lapper was worth $2,000.

The 30 lap Modified Sunday Summer Slam found Joey Grammes and Tyler Siri on the front row. Grammes immediately raced out to the lead at the drop of the green but was unable to shake Siri. A number of early race cautions slowed the pace but by lap 5 things were starting to already sort out. A lap four restart found Grammes on the point with Siri, Colsten, Kevin Bates and Mike Butler running in the top five. The top three immediately went three wide for the race lead and that battle continued lap after lap.

Once out front Colsten quickly pulled away from the rest of the field. The caution flew again on lap 14 as Brian Malcolm and Butler got together off turn 4 while running solidly in the top ten. Fortunately, the caution came out quickly and everyone was able to take evasive action. Both Malcolm and Butler also continued when racing resumed. On the restart Colsten again opened up his advantage but now all eyes were 2016 Modified Summer Slam Co-Champion and Rookie of the Year Brad Szulewski. Szulewski began to take advantage of the outside of the quarter mile oval as he began his advance. Another driver on the move was Nick Rochinski who was involved in a lap 1 tangle and sustained front end damage. After pitting they were able to return on the lead lap and he too was moving forward fast from the back.

On lap 23 Siri saw his strong drive come to an end as he headed pit side. This moved Grammes back up to second with Szulewski, Rochinski and Bates in the top five. When the green flew Szulewski began to work on Grammes for second as this allowed Colsten to pull ahead. Colsten would go on for the popular win with Szulewski working past Grammes for second. Grammes finished third with Bates edging out Rochinski for fifth.


Earl Zimmer has become a fan of Five Mile Point Speedway in the Street Stock division. Zimmer won both of the big fall season ending shows in 2016. On Sunday, Zimmer picked up where he left off last fall by recording the win in the Fight Night All-Star Street Stock series. Zimmer took the lead on lap one but the victory did not come easy. Zimmer actually relinquished the lead on two occasions during the 25 lapper as at one point a four wide battle for the lead occurred at the mid-way point. At the finish Zimmer was followed by Jon Carpenter, Gene Sharpsteen, Jared Dennis and Lanson Albanese. Carpenter raced from the 15th starting position for his runner-up finish.

Byron Worthing led wire to wire in the 20 lap Summer Slam event for Xcel 600 Modifieds. Eric Boyd, the eventual second place finisher stayed close all the way through but was never able to make a serious threat for the win. Tyler Barik, Bailey Boyd and Dana Davis rounded out the top five. Modified driver Peter Britten was a team mate of Worthing on the day but his run ended on lap 2 with steering issues. Worthing also competes in the Modified division.

Andrew Brigham was the early race leader in the 20 lap FWD Four Cylinder Feature event on Sunday. Brigham took command at the drop of the green only to see Casey McPherson charge past on lap 12. McPherson looked impressive as he drove to his first ever Five Mile Point Speedway victory. Brigham saw his great drive end on lap 18 as he came to a stop in turn 2. Nick Kennedy wound up second at the finish for the second consecutive week. Trevor Williams, Frank Kennedy and Dave Simms rounded out the top five.

COUNTER POINTS…Despite some rough areas on the quarter mile…the speedway surface was incredibly racy as three and four wide racing was again the norm on Sunday…There was no tire wear as a result of the track conditions in the Modified 30 lapper…A number of bonuses were posted on Sunday…In the Modified division Brad Szulewski earned an extra $125 and Matt Brewer picked up $125 thanks to James and Jason Whitman in honor of Reta and James Whitman….Szulewski was the Hard Charger and Brewer was the top finishing Crate Sportsman in field…A $125 bonus went to Larry Mekic as the top finishing Open Sportsman powered Modified…A Gamblers Bonus was posted with Mike Colsten and Brian Nelson each pocketing an extra $120…Mike Colsten now simply as to take the green in the remaining three Modified Summer Slam events to earn a $500 winners bonus from Shakelton NAPA Auto & Truck Parts and another $250 bonus from Tonarlo’s Restaurant…

This Saturday the speedway will host an open practice to benefit CHOW. Grandstand admission is FREE with the donation of a non-perishable food item to benefit CHOW. Practice is at 2 p.m. on Saturday. There is no racing this weekend in observation of the Easter Holiday on Sunday. Racing continues on Saturday, April 22nd.