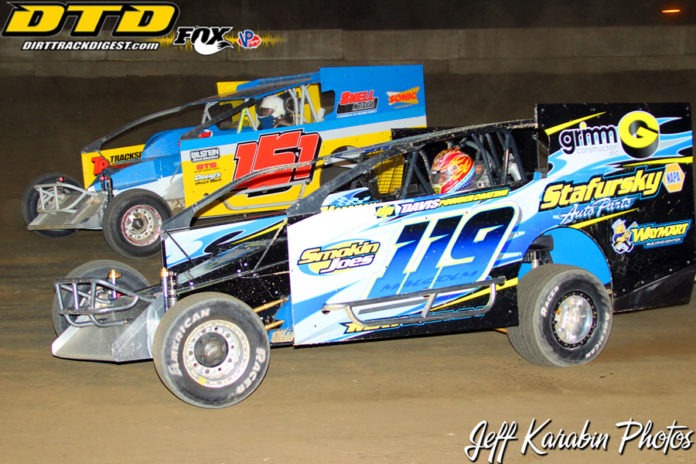 KIRKWOOD, NY – The 24th edition of the Southern Tier Open for Modifieds will take place this Saturday at Five Mile Point Speedway. The 40 lap traditional event will pay $2,000 to the Modified race winner. The Street Stocks also return to action for a big night of racing that gets underway at 6 p.m. As always, children 12 years old and younger will be admitted FREE of charge.

The annual Southern Tier Open has a rich history that began in 1970 when Canadian driver Ivan Little took the top honors. The race ran continually through 1975. That edition was won by the legendary Jack Johnson. Dan Harpell resurrected the event in 2000 with Jim Crawn winning that edition. The race has since been held continually with some big names in the Modified division recording wins in this event.

The Modified 40 lap Southern Tier Open this Saturday will be the 24th edition of the race. The race winner will earn a cool $2,000 for the victory. Last year Dan Creeden won his second Southern Tier Open, the other came in 2011.

The Modified 40 lap event will also award a $200 driver bonus courtesy of JGK Motorsports to the top finishing weekly driver from the Woodhull Raceway in the western southern tier of New York. Their Modified division is off this week and many of their teams participate in the Five Mile Point Speedway Modified special events. In addition, the top three finishing Open Sportsman will be eligible for bonuses paying $150, $125, $100 in that order.


This Saturday marks the official start of the point championship title races for the Crate Sportsman, Lightning Cats, Slingshots and Factory Stocks. The Modifieds will begin their full point chase next Saturday, April 29th. The Street Stocks were added to the program this Saturday and will also run for full points this weekend.