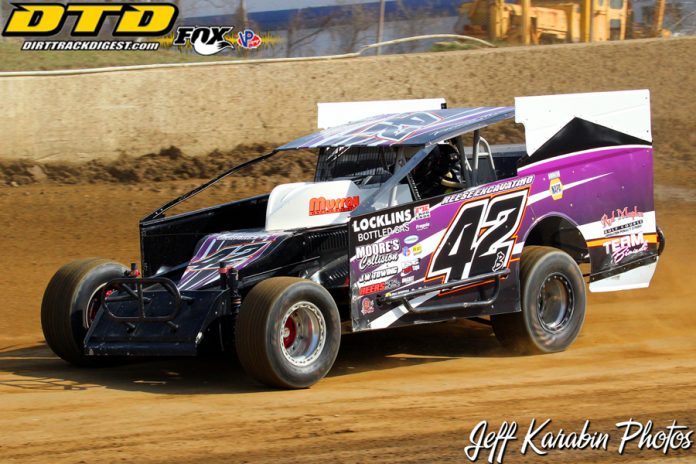 The 30 lap Modified feature event found Brian Weaver and Bates on the front row for the start. At the drop of the green it was Weaver gaining the advantage. That lead was short lived as the first and only caution of the event flew on lap 3 for Travis Smith who had slowed to a stop on the homestretch. On the restart Weaver darted to the outside and Bates dove underneath for the lead. Weaver slung back under Bates only to see Bates rally back past on the outside to lead lap number 4. Bates would go on to dominate as the remainder of the race went caution free. Bates actually lapped all but the top seven finishers in the 30 lap triumph.

Although Bates wrote his own story the battle for second through seventh was one of the best ever seen on the quarter mile. Weaver, Rusty Smith, Nick Rochinski, Mike Butler and Tyler Siri raced three and four wide changing lanes lap after lap throughout the balance of the 30 lap affair. Weaver held second place until lap 26 when Smith moved past. Weaver rallied back past on the following circuit as Siri ran the extreme bottom in a torrid three wide battle. The final circuits found lapped traffic making the race for second four wide at certain points. At the finish Bates cruised to the victory. Weaver used his experience to his advantage with the lapped traffic to take second at the stripe. Siri just edged out Smith for third with Rochinski edging out Butler for fifth. Mike Colsten, Brad Szulewski, Glenn Knapp and Aleia Geisler rounded out the top ten in her career best FMP Modified finish.

Randy Fox took advantage of his outside front row starting spot in the 20 lap Crate Sportsman feature event to lead all 20 laps for his first victory 0f 2017. Mike Schane started on the pole with Fox at the start but Fox took advantage of the excellent outside line on the quarter mile. For Fox the victory came with a cost. Over the final several laps the 957 began to smoke and although Fox was able to hang on for the win the motor expired on the final circuit. Schane wound up finishing second with Devon Zona, Matt Cole and Kyle Pierce rounding out the top five. Fourth place finishing Cole was the three-time defending IMCA Modified Track Champion. The 20 lap feature went caution free.

Ricky Davis Sr. was the winner of the 20 lap Street Stock feature event on Saturday. Davis had a great battle throughout the feature event with Doug Polhamus as the duo ran side by side throughout. The late stages of the race found last week’s winner Shane Wolf Jr. and Doug Stack joining the battle up front. Although Davis had led throughout the final lap saw Wolf move to the outside and Polhamus to the inside as the trifecta crossed the line three wide. After review, it was Davis being credited with the victory. Polhamus finished second with Wolf, Stack and Ray Lindquist completing the top five.


Eric Beach raced out to the early lead in the 15 lap Factory Stock main event. Josh Towner moved past on lap 3 but Beach wasted no time in rallying back in to the top spot the next circuit. Beach went on for his first win of the season with Towner, Kevin Skelly, Buch Mills Sr. and Charlie Towner rounding out the top five.

After a pair of runner-up feature finishes Nick Kennedy raced to his first win of 2017 in the Lightning Cat Expert feature event. Kennedy led all 15 laps in the feature event that went caution free. Rich Wagner raced from ninth to second at the finish with Kenny Underwood advancing from seventh to third. Defending Track Champion Adam Gilbert wound up fourth with Trevor Williams coming home fifth.

COUNTER POINTS…An outstanding night of racing took in all of the classes on a cool damp evening that saw light rain fall on occasion…The 7 feature program was completed by 9:45 p.m. with 127 laps of feature action logged and a total of 6 caution flag periods the entire evening…The racing was a result of the fantastic track conditions that providing three and four wide racing all night long…This Saturday, the Modifieds will draw for starting position once again and all of the other divisions will enter their handicapping status for the 2017 point battles…