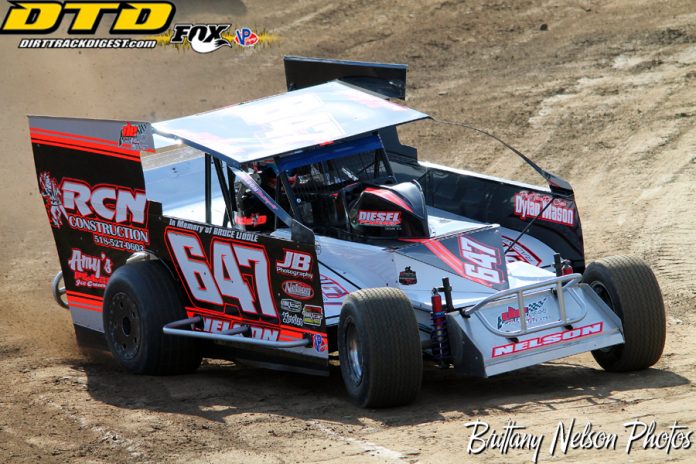 KIRKWOOD, NY – Five Mile Point Speedway is ready to go racing on Saturday for a big program of excitement on the quarter mile oval. While most northeast Friday racing venues fell victim to the weather Five Mile Point Speedway is geared up for a big Saturday. This Saturday is Windsor Community Night. All town residents will be admitted FREE by simply presenting photo i.d. at the box office. Racing begins at 6 p.m. and kids 12 years old and younger will be admitted FREE of charge.

The on-track excitement in 2017 has been second to none as the racing has proven to be a thrill a minute in all of the classes. The Modifieds have yet to have a repeat winner in three races thus far in 2017. The competition has been outstanding with any of the teams capable of finding their way to victory lane. Last season the Modified division saw an incredible thirteen different feature winners in fourteen races. That theme could continue again during the 67th consecutive season. This Saturday the Modified teams will again be “drawing” for starting position as handicapped racing does not begin until Saturday, May 20th.

Competition in the Crate Sportsman division has also been hotly contested as there have also been three different feature winners in three races this season. Kyle Rohner, “The Bushkill Bullet” is the Defending Track Champion and has one victory this season in the division. Like the early season trend the Street Stock division has also yet to see a repeat feature winner in three events. Last week Ricky Davis, Sr. captured the victory in an incredible three wide finish to the checkers. Doug’s Speed Shop in Binghamton, NY has posted some cash bonuses for the class this Saturday as well.

Action in the Lightning Cat Experts, Novice, Factory Stocks and Slingshots has also been intense leading up to tomorrow’s racing action. The race season is in its infancy for 2017 but the point championship battles are tight and heating up.

Pit gates open at 3 p.m. on Saturday with grandstand gates set to open at 4 p.m. Practice is slated for 5 p.m. with the first qualifying event scheduled to hit the track at 6 p.m.


For additional information please phone 607-775-5555 or log on to www.5milepointspeedway.com. You may also email the speedway directly at fivemilepoint1@aol.com. Complete pricing, order of events and race rules can be found on our website. Five Mile Point Speedway – “The Home Speedway of the Southern Tier” where kids 12 and younger are admitted FREE to every race event!