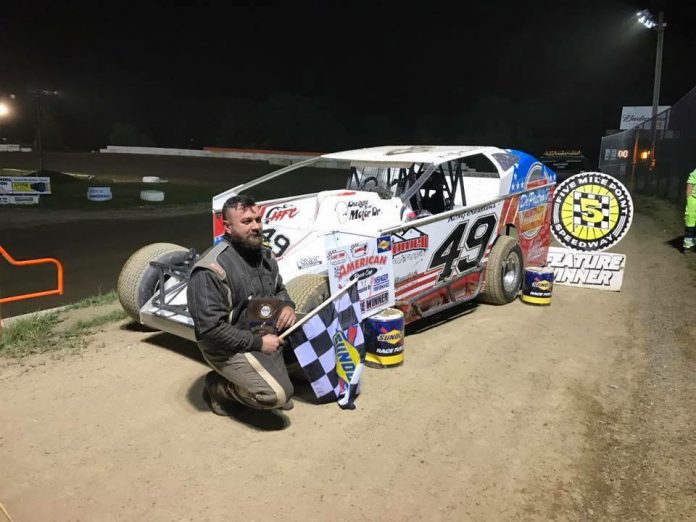 Howell, who raced to his first ever Five Mile Point Speedway victory just became a track regular three weeks ago as he got a late start to the season. He has been fast every week and this past Saturday was his night. Howell led wire to wire in the 20 lap Crate Sportsman main event but it certainly was not easy. Tom Hampton started on the outside of the front row but it was Randy Gates quickly emerging as the early race contender. Gates charged from fifth to second place by lap 3 using the outside of the quarter mile oval as Howell utilized the middle of the multi-grooved surface.

On lap 8 the caution flew Gregg Turner and Colby Hendrickson lost the handle in turn 4. Both were able to continue. On the restart Howell opted to re-start the race on the inside of the quarter mile providing Gates the high side that got him to second place. On the restart Gates swung high then tried to slingshot his way into the lead on the bottom of turn 1. The move backfired as he dove in too hard and spun. Third place runner Devon Zona lost numerous positions in the incident but was able to return. Gates retired for the evening. On the second attempt on lap number 8 Howell now had Kyle Pierce to contend with in second place. Like his previous race lead contender Pierce also ended up spinning in turn 1 on lap 10 as Kyle Rohner looked to advance from his third spot. Both Pierce and Rohner rejoined from the rear of the field.

On the lap 10 restart Tanner Harpell ran in second place with Matt Cole in third. Another flew on lap 12 as a multi-car tangle occurred when Hendrickson spun collecting Pierce, Rohner and Del Howell. Both Rohner and Howell were taken off on the hook as a result. When racing resumed Howell began to change his line as he took his act to the high side of the speedway. Harpell ran in second trying to make several bids on the bottom of the quarter mile oval. Cole remained in the hunt with Harpell as Leo McGurrin ran in fourth and Randy Fox was now fifth. Harpell looked to be better on longer green flag runs as Howell began to get wider and wider with his line. On lap 18 the final caution flew and on the restart Howell was able to fend off any remaining challenges to go on for the win. Harpell wound up second with Cole, McGurrin and Fox rounding out the top five.

Dan Mazzarese became the fifth different Street Stock feature winner in six weeks by taking top honors in the 20 lap feature. Doug Stack Jr. led the early going of the feature as Mazzarese made several bids for the top spot. A three wide battle set up on lap 3 with Doug Polhamus joining in on the battle for the lead. Polhamus took over on lap 5 and would lead the next two circuits. On lap 7 Polhamus saw his great drive derailed as he had a tire go down and headed pit side. Mazzarese took over the lead at this point with Stack in second and two-time winner Shane Wolf, Jr. trying to chase them down. A caution on lap 10 reset the field with the top three unchanged. Polhamus was now back up to fourth place.

The final ten laps saw a great race between the race leader Mazzarese and Stack as they ran side by side lap after lap. Wolf kept trying to work the outside of the speedway to make it a three wide battle but could not make it stick. On the lap Mazzarese left the inside open as again Stack powered to the inside. The two ran side by side and out of turn 4 Mazzarese had just enough to edge out Stack at the wire. Wolf finished third with Polhamus fourth and Bowman fifth.

The 15 lap Lightning Cat Expert feature event saw Mike Wilmot, Jr. race out in to the early lead. Wilmot was chased by Dave Bainbridge in the early going as a number of three and four wide battles occurred throughout the field. Nick Kennedy raced his way forward from his eleventh starting spot to take over second on lap 5. Kenny Underwood was also began to advance toward the front from his tenth starting slot. On lap 8 Bainbridge saw his strong run slowed. Defending Track Champion Adam Gilbert appeared to break in turn 2 and the car snapped right collecting Bainbridge in the process. Gilbert went to the pits with Bainbridge rejoining at the back of the pack.

On the restart Kennedy raced by Wilmot for the lead using his normal outside line on the quarter mile. Underwood drove in to second place one lap later and started to chase down Kennedy. On lap 12 Underwood worked past Kennedy on the inside to take over the lead. Underwood went on for his third win of the season. Kennedy ended up second with Trevor Williams charging to third at the wire. Wilmot and Andrew Brigham completed the top five.

The 15 lap Factory Stock feature event saw Josh Towner race to his first victory of the season. Towner led the entire distance despite a number of challenges from eventual runner-up Eric Beach. Harry Marvin, III wound up third with Charlie Towner and Neil Deblasi rounding out the top five.

The Slingshot feature event was a rough and tumble affair on Saturday. Dalton Maynard continued his win streak by capturing the feature event. Jim Pollard raced to second place with Blaine Klinger finishing third. Klinger was spun twice during the event and came from the back to take the podium spot. Shane Lewis, Jr. and Shane Mahieu completed the top five.

COUNTER POINTS…Thank you to all of the fans and race teams that donated pet food items to benefit the Broome County Humane Society on Saturday…They generated a lot of donations for the pets they currently have at their site…Modified drivers Bobby Puckett, Randy Fox and P.J. Goodwin took advantage of a few rounds of Modified hot laps during the evening as the division was off for the 67th anniversary “Pack the Track Night” event…Grandstand admission was only 67 cents to commemorate 67 consecutive years of racing…Admission was free if anyone donated a pet food item on the evening…Racing continues this Sunday with the biggest event of the season…The DIRTcar Big Block Modified 67 lap event will take center stage this Sunday along with the GRIT Crate Sportsman, Xcel 600 Modifieds and Fantastic Five FWD Four Cylinders…