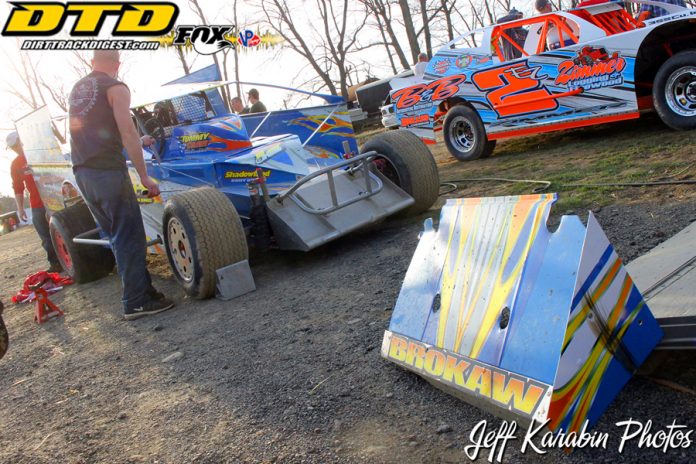 KIRKWOOD, NY – The second race of the Modified Summer Slam is this Sunday, July 16th at Five Mile Point Speedway. The 30 lap Modified feature event will pay a whopping $4,000 to the race winner. The race is a non-handicapped event meaning it will be a draw for starting positions. Race time is 6 p.m. on Sunday.

Prior to the huge Sunday race the speedway will be hosting a special Wednesday night event this Wednesday at 7:30 p.m. The evening will be a night of features. The Modifieds have heat races and a full program. Qualifying for the other weekly divisions was completed back on Saturday, July 1st prior to rains washing out the program. Rainchecks from Saturday, July 1st will be honored this Wed. For those without rainchecks adult admission is only $10 and all youth 17 years old and younger will be admitted FREE!

The Sunday Summer Slam has been a big success after its introduction last season. Five Mile Point Speedway Modified driver Brad Szulewski was the 2016 Summer Slam co-champion with Anthony Perrego. Szulewski has yet to win this season but currently sits second in the point standings. Mike Colsten leads the Summer Slam points after one race with Joey Grammes, Kevin Bates and Nick Rochinski rounding out the top five.

The Modified race pays a whopping $4,000 for only 30 laps of feature action. It is sure to be an all-out battle for the top spot as this is one of the richest pay days per mile in the entire 2017 northeast racing campaign. Shakelton NAPA Auto & Truck Parts and Tonarlo’s Restaurant in Conklin have stepped up to help make the winners share the $4,000 amount for this Sunday.

Area teams have a great opportunity on another solid payday at Five Mile Point Speedway. The Modified Summer Slam is designed around the area race teams with four extra paying events scheduled from them as part of the program. The races were originally set up on dates without any conflicts for the regional teams as well giving them an extra pay day in their 2017 race season.


Again, this Sunday, July 16th is race number 2 of the Sunday Summer Slam. Shakelton NAPA Auto & Truck Parts and Tonarlo’s Restaurant have added extra incentives for the Modified 30 lapper to make it a whopping $4,000 to win. The race is a draw – re/draw format and all weekly teams will receive 25 show up points along with the separate Summer Slam Points.