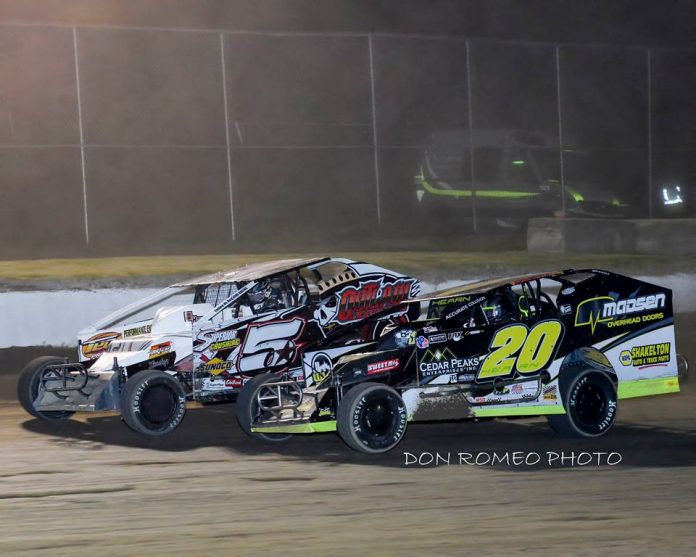 KIRKWOOD, NY – Brett Hearn has had an incredible dirt Modified career and along the way he certainly made his mark at Five Mile Point Speedway being named one of the original “50 Greatest Drivers of All-Time” back in 2000. This Sunday Hearn will return with his site set on the $4,000 top prize in the 30 lap Modified Summer Slam. Racing begins at 6 p.m. this Sunday.

Hearn is the latest driver to commit to this Sunday’s event at Five Mile Point Speedway. The race is the second of four Sunday Summer Slam races for the Modified division. The four race program consists of 30 lap “non-handicapped” events with its own point fund established. This Sunday’s event will pay $4,000 to win for only 30 laps of racing thanks to additional support from Shakelton NAPA Auto & Truck Parts and Tonarlo’s Restaurant. Brad Szulewski and Anthony Perrego were “co-champions” of the 2016 Sunday Summer Slam for Modifieds.

Back on Sunday, June 11th Hearn raced to a “runner-up” finish in the Shakelton NAPA Auto & Truck Parts Super DIRTcar Series Modified event. He and Five Mile Point Speedway Modified standout Tyler Siri had a great battle for the race lead throughout the first quarter of the event. Siri has led the Five Mile Point Speedway Modified division point standings for most of the season but has yet to log a win. Hearn and Siri will both be looking for the $4,000 top prize this Sunday. Hearn has won Super DIRTcar Series events at FMP as well as the Southern Tier 100 and swept the popular “Triple Crown” that was held for Modifieds in the early 90’s.

The Sunday Summer Slam program for Modifieds has its own point fund and a loyalty bonus program presented by Shakelton NAPA Auto & Truck Parts and Tonarlo’s Restaurant. If a driver wins any one of the four races and competes in every race they will earn a $500 bonus courtesy of Shakelton NAPA Auto & Truck Parts. Tonarlo’s Restaurant in Conklin, NY has also put up $250 per event for that same loyalty program. Race number 1 winner Mike Colsten just has to participate in the next three races and he will receive a $750 bonus. With the loyalty program this Sunday’s race winners earnings could swell to $4,750 for only 30 laps of racing action.

A number of other bonuses are offered up at all four Modified Sunday Summer Slam events as well. Lias Tire and American Racer will offer up a free Modified tire to a randomly drawn driver again this Sunday.


This Sunday, July 16th is race number 2 of the Sunday Summer Slam. Shakelton NAPA Auto & Truck Parts and Tonarlo’s Restaurant have added extra incentives for the Modified 30 lapper to make it a whopping $4,000 to win. The race is a draw – re/draw format and all weekly teams will receive 25 show up points along with the separate Summer Slam Points.