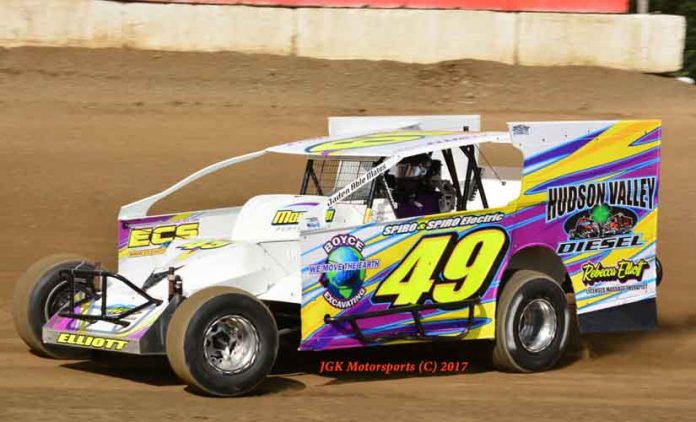 KIRKWOOD, NY – Donnie Elliott waited for the perfect time to capture his first ever Five Mile Point Speedway Modified victory on Sunday as the winner of the Sunday Summer Slam 30 worth $4,200. Rusty Smith led the first 28 laps of the feature only to have a flat tire derail his hopes of his first ever Modified victory at the quarter mile oval.

Race number 2 for the popular Modified Sunday Summer Slam took center stage at Five Mile Point Speedway on Sunday as thirty-three teams were on hand looking for the $4,000 winner share in the 30 lap event. Nick Rochinski and Rusty Smith led the twenty-five car starting field to the green for the feature event. Smith made it known early he was the guy to beat as he jumped out to the lead. Smith utilized the high outside around the speedway as he quickly opened his margin over Rochinski.

The first caution of the event flew on lap 12 as Glenn Knapp slowed on the homestretch with motor trouble for the second straight event. A rash of cautions ensued over the next several laps as two starts were called back and minor jingles shuffled the field. After a rough stretch the final caution of the race flew on lap 15 for a slowing Ron Cartwright and the balance of the feature would be intense.

When racing resumed on lap 15 Smith continued his dominance on the outside of the speedway as Rochinski put forth a battle on the middle of the speedway and Donnie Elliott remained close with him. Richard Smith made his way up from sixth place to now contend with Elliott and Rochinski as Smith began to open up his lead once again. Out front Smith did not waiver as he used the outside line to further his lead as the laps wound down. On lap 20 Elliott worked his way past Rochinski into second but Smith had opened up a full straightaway lead at this point.

With only five laps remaining Smith began to fall off the pace as he had a right rear tire going down. Elliott closed the gap each lap but even with the tire losing air Smith had established such a big lead it looked like he might go the distance. On lap 29 Smith relinquished the lead to Elliott as he was just trying to hang on at this point. Elliott was able to lead the final lap and go on for his first ever FMP win. Steve Davis made an impressive late race charge to capture second place with Rochinski coming across in third. Richard Smith and Brian Puckett rounded out the top five. Brett Hearn, Mike Colsten, Erick Rudolph, Rusty Smith and Randy Chrysler rounded out the top ten.


For Elliott the victory was the biggest of his racing career and he had this to say in victory lane, “I just can’t believe how this all came together for us. We came out of the gate great from the beginning today as the car felt fantastic and I’m really speechless how big this is for us.” He added, “We worked really hard on this setup and I can’t believe how great this feels.” Rusty Smith had every reason to be dejected after the race and commented, “I believe I hit something on lap 22 as that’s when I had to start fighting the car on the straightaways. The car was fantastic and I had no idea how big of a lead I had as I kept waiting for someone to catch me on the final laps.” He added, “My family started racing here with my grandfather and I really want a feature win at Five Mile. I thought this was our day.”

A very talented and diverse field of Modified teams were on hand for race two of the Sunday Summer Slam. Almost half of the feature starting field was comprised of feature winners this season at different speedways. Heat wins went to Rochinski, Richard Smith, Davis and Gibbs. Shakelton NAPA Auto & Truck Parts along with Tonarlo Restaurants helped to make the winners share over $4,200 for just 30 laps of racing. Brad Szulewski, the defending co-champion of the Sunday Summer Slam received the $125 Hard Charger Award in memory of Reta and James Whitman. Szulewski started 22nd and finished 11th at the stripe.

The Fight Night All-Star Street Stock Series 25 lap feature event went to Dylan Cecce. Cecce took the lead on lap 20 from Doug Stack, Jr. for his first Five Mile Point Speedway win of the season and second of his career at the speedway. Cecce also won the night prior at the Woodhull Raceway. The race was rough and tumble early on as a number of caution flag periods slowed the flow. The race was red flagged early as Gene Sharpsteen and Earl Zimmer spun and had their cars hooked together requiring a lengthy removal process that did allow both drivers to continue. After the early struggles, the racing was great throughout the balance of the race. Stack showed the way for the first 19 circuits with Cecce taking command on lap 20. On lap 21 the final caution of the race flew as a tremendous battle between Butch Green and Jon Carpenter for fourth place saw the duo spin off of turn 4. Cecce went on to lead the balance of the race with Stack finishing in second. Jerred Dennis had his best career FMP finish in third with Noah Jensen fourth and Sharpsteen rallying for fifth.

Steven Sherwood and Byron Worthing set the pace for the 20 lap Xcel 600 Modified Sunday Summer Slam event. Worthing took the lead at the drop of the green and never looked back leading every lap on the way to the win. For Worthing, it was his second win in the two Summer Slam Xcel 600 Modified races this season at the speedway. Sherwood raced to a solid second place finish with Chris Kithcart, Will Eastman and Kevin VanValkenburg rounding out the top five. The race was slowed by only one caution by a one car spin on lap 11.

Josh Towner raced from his outside front row starting to position to lead every circuit of the 15 lap Factory Stock feature event. Although Towner led the duration it was anything but easy as he had to fight off early challenges from last week’s winner Kevin Skelly and a number of late race challenges from Eric Beach. At the finish Towner edged out Beach with Skelly, Buck Mills Sr. and Barry Simpson completing the top five.

A pair of front wheel drive Four Cylinder feature events were on the docket on Sunday. The held over Fantastic Five FWD Four Cylinder feature win went to Nick Kennedy. Kennedy started ninth on the field and took over the lead from his brother Frank on lap 10 of the 20 lap feature. Nick Kennedy led the distance over his brother for the $400 victory. Kenny Underwood, Jeremy Warren and Adam Gilbert completed the top five. In the nightcap 15 lap feature Casey McPherson led the 10 laps of the feature only to relinquish the lead to Mike Robinson. Robinson looked to have the race locked up only to have mechanical problems on the final lap. McPherson raced past and went on for the win. Underwood finished second, Gilbert, Frank Kennedy and Robinson rounded out the top five.