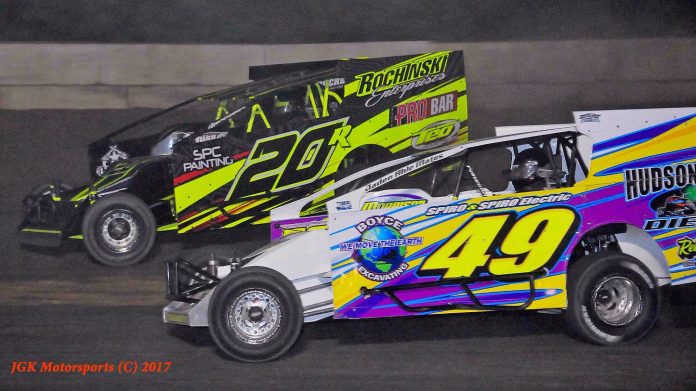 KIRKWOOD, NY – Nick Rochinski threw his name in to the 2017 Five Mile Point Speedway Modified title conversation by winning his second feature of the season on Saturday. Rochinski became only the second repeat Modified winner of the 2017 racing season.

Glenn Knapp and Mike Loney led the Modified field down for the start of the 30 lap feature event. For Knapp, he was hoping to rebound after losing two motors in back to back weeks of action. At the drop of the green it was Loney racing out front using the preferred high side of the quarter mile oval. Jesse Kline quickly made his way up to second place with Rochinski up to third during the early going. The caution flew on lap 4 as Mike Colsten spun exiting turn 4. Brian Puckett was collected and Ric Hill slowed as well.

The second and final caution of the event flew on lap 10 with Rochinski now in second place and Loney’s lead evaporated. The yellow flew for a slowing Jesse Velez on the homestretch. On the restart Loney chose the outside line and continued his lead as Rochinski remained close. Brad Szluewski made his way past Kline for third on lap 12 as Bates had now worked in to the top five as well. On lap 14 Rochinski put a slide job on Loney for the lead but Loney returned the favor to recapture the point briefly. On lap 15 Rochinski took the lead for good as he quickly pulled away from the field. A great battle ensued over the next several laps between Szulewski and Bates for third place with Bates moving past on lap 22.

At the finish Rochinski powered to the win never changing the outside line during his dominating performance. Loney had his best finish of the season in second with Bates, Szulewski and Kline rounding out the top five. Mike Butler had another strong run for sixth with Tyler Siri, Randy Green, P.J. Goodwin and Mike Colsten completing the top ten.


Tom Hampton and Joe Guastella brought the Crate Sportsman field to the green for the 20 lap feature event. The race got off to a rough start as Mike Senecal was spun in turn 1 before a lap was logged. Senecal had damage but was able to return. When racing resumed Guastella, a true rookie in racing took the lead and looked strong on the outside line. The race would change complexity immensely at the halfway mark. Kyle Rohner made an inside pass for the race lead entering turn 3. Guastella tried to slingshot his way back underneath Rohner exiting turn 4 drove Rohner around. The caution came out with both rejoining at the rear of the field. Third place runner Matt Cole took over the point after the incident with Tanner Harpell now in second. On the restart Cole was able to open up his lead as Harpell continued in second place. At the finish it would be Cole picking up his first Crate Sportsman win during his rookie season. Harpell wound up second. Brad Cicio had a strong run for third with Kyle Pierce and Leo McGurrin completing the top five.

Shane Wolf, Jr. raced to his third Street Stock victory of the 2017 racing season on Saturday. Ricky Davis, Sr. took the early race lead but Wolf slowly worked his way forward from the sixth starting spot using the outside of the quarter mile. On lap 6 Wolf made his way in to second place as he worked past Matt Bowman and he quickly set his sight on Davis. As Davis ran the middle Wolf continued to use the outside of the speedway. On lap 8 Wolf made his way past Davis for the race lead. For Davis, it would be another heartbreak as on lap 9 he had a wheel come loose while running in second. At the finish it would be Wolf, Bowman, Doug Polhamus, Ray Lindquist and Bobby Hall Jr.

Josh Wilder led lap one in the 15 lap Lightning Cat Expert feature event. His lead was short lived as Novice Champion Jimmy DiFulvio took the point on lap 2. DiFulvio was in a new ride as he looked strong out front. On lap 10 a scary incident took place as Jeremy Warren barrel rolled his car in turns 3 and 4. Warren flipped five times before coming to a rest upside down. The speedway safety team took extra precautions extracting Warren from the car and he did fortunately emerge uninjured. He was transported for precautionary measures but later released. DiFulvio continued to lead until the final lap when a coil issue slowed his run. Nick Kennedy was there and pounced. Kennedy went on for the win. Wilder, Mike Wilmot Jr., Kenny Underwood and Rick Lunn rounded out the top five. DiFulvio coasted across the line for ninth.

Charlie Towner jumped out to the early race lead in the 15 lap Factory Stock feature event. Buck Mills, Jr. raced from his seventh starting slot and took the lead on lap 11. Mills would go on for the victory over Eric Beach, Towner, Ryan Brockner and Josh Towner.

COUNTER POINTS…Rain once again swept through the area on Saturday prior to the racing action…Racing started only five minutes behind schedule despite the rain and the Modified feature was in the books by 9:45 as a light rain fell…Ric Hill and Jesse Velez made their first Modified starts of the season on Saturday…