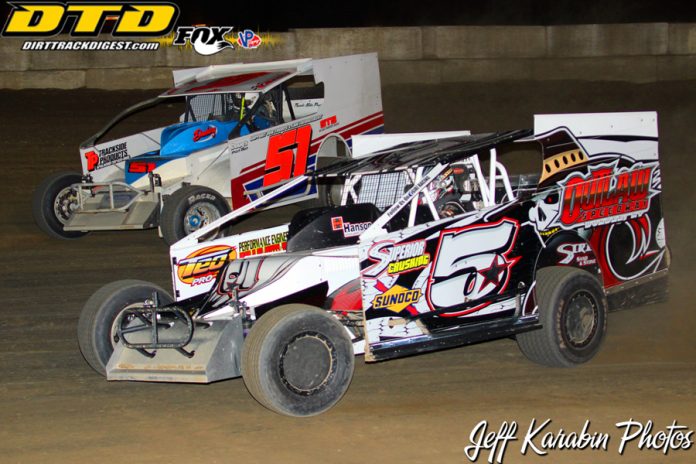 KIRKWOOD, NY – The “Night of Features” scheduled for Tuesday at Five Mile Point Speedway has been postponed yet again. Heavy rains that fell over the area overnight Sunday and throughout the day Monday has left the property and race track oversaturated making it impossible to host racing on Tuesday. The program which was originally started and rained out on July 1st will be made up on Saturday, August 19th. Rain checks will be honored on that night. All focus now turns to the most important race of the season this Saturday – the 53rd Heath Memorial. Racing on Saturday begins at 6 p.m.

The Heath Memorial race is an event that honors the founders and builders of Five Mile Point Speedway Irving and Anna Heath. The speedway was built in 1951 and has operated consecutively since to its present day. Mr. Heath passed away in 1965 and his wife Anna maintained ownership until 2005 when the speedway was purchased by their grandson Andrew Harpell. Mrs. Heath passed away prior to the 2005 racing season.

This year the event takes an even greater significance as the IMCA Modifieds will return for the “Little Mike’s Race to Win” honoring the memory of Mike Stolarcyk, III. That event, which annually is the biggest for the division in the area honors Mike who was a long time supporter of the division at Five Mile Point Speedway and former Track Champion. The “Little Mike’s Race to Win” pays $1,000 to the winner.

The weekly Five Mile Point Speedway Modifieds will compete in a special 40 lap Heath Memorial this Saturday. That race will pay $2,000 to the race winner. The competition in the Modified division has been outstanding all season long.

Driver’s from the past will again be honored this Saturday for the Former Racer’s Reunion. Former Five Mile Point Speedway drivers return each year for the Heath Memorial and are recognized for their years of support to the track. Former drivers from as far away as Arizona return annually for this event.


A huge night of racing will also include the Crate Sportsman, Street Stocks, Lightning Cats and Xcel 600 c.c. Modified North Regional Tour event. The Slingshots are off this Saturday.

Pit gates open at 3 p.m. this Saturday with grandstand gates opening at 4 p.m. Practice begins at 5 p.m. with racing set for 6 p.m.