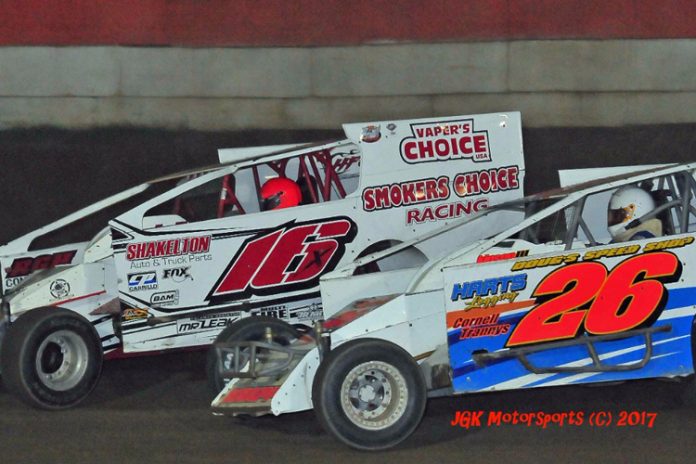 KIRKWOOD, NY – Rainy weather has wreaked havoc with the 2017 Five Mile Point Speedway race schedule. After a full season of competition several Track Championships will be decided this Saturday on Season Championship night. A special 5 p.m. program will see held over feature events (originally from a July 1st rain out) this Saturday with FREE grandstand admission for all. Fans will be able to meet 2016 Modified Summer Slam Co-Champion and Rookie of the Year Brad Szulewski beginning at 5 p.m. this Saturday as well.

At the completion of those held over feature events, the grandstand area will be cleared and fans will then be able to re-enter for the regularly scheduled Season Championship event. This past Saturday, racing was rained out once again as it was the fourth attempt to complete a previously rained out race that originated back on July 1st. That night was also rained out after the racing program had begun.

Fans will receive free grandstand admission this Saturday for six held over feature events beginning at 5 p.m. At the conclusion of those races, the grandstand area will be cleared and fans will then be permitted back in for the originally ticketed Season Championship program. Five of seven Track Championships will be decided this Saturday night. A season of racing will come down to one night to determine the 2017 Champions in the Crate Sportsman, Street Stocks, Factory Stocks, Lightning Cat Novice and Slingshots. The Modifieds and Lightning Cat Experts will also be in action this Saturday but their Track Championships will be determined on Sunday, September 17th. The speedway will be off after this Saturday until that September date.

All kids 17 years old and younger will be admitted FREE to both the held over features program and the originally scheduled Season Championship night. This Saturday will truly be an event that is affordable for the entire family.

Spectators are welcome to begin tailgating beginning at 12 noon on Saturday. Practice will begin at 4 p.m. with the held over feature events beginning at 5 p.m. sharp. Again, grandstand admission for that six feature program is absolutely free!


For additional information please phone the Five Mile Point Speedway offices at 607-775-5555 or log on to www.5milepointspeedway.com. A full schedule of the days racing program is listed below.


Season Championship Pricing Information – Youth Night all kids 17 years old and younger admitted FREE!
Grandstand Admission:
Adults ($12), Seniors (65 and older): $10
* please note – grandstand tickets for the night race can be purchased any time during the held over features. Ticket holders will be permitted back in to the grandstand via the two gates – EXPRESS ENTRANCE on Sat.
Pit Pricing:
Members: $30
Temp-Members: $35
* Modified and Lightning Cat Expert final point events (single points) on Sunday, September 17th.
For more information please phone the Five Mile Point Speedway offices at 607-775-5555 or log on to www.5milepointspeedway.com. Email – fivemilepoint1@aol.com.