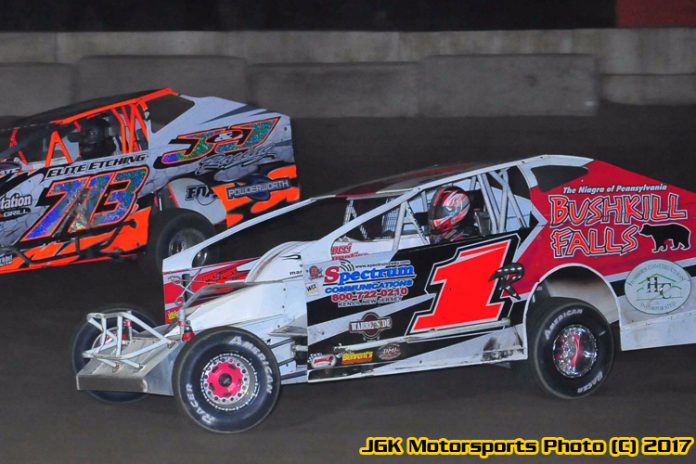 KIRKWOOD, NY – For the second consecutive year Kyle Rohner outshined the competition on his way to winning the 67 lap “Great Crate Race” at Five Mile Point Speedway. The victory was worth $3,000 and completed the 67th consecutive year of racing at the speedway. Dylan Cecce was the $1,000 Street Stock winner with Tom Groover winning the Factory Stock event. Kenny Underwood not only won the $1,000 FWD Four Cylinder race he also locked up the “Fantastic Five Front Wheel Drive Four Cylinder” Championship in the process.

Garett Rushlow and Jim Housworth led the twenty-four car Crate Sportsman starting field to the green for the 67 lap season finale. Rushlow darted out to the early lead but Housworth wasn’t wasting time as he worked past on lap 3 and quickly opened up his advantage. The third and fourth starting spots were comprised of Kyle Rohner and Tom Collins, Jr. Rohner was the 2016 and 2017 Five Mile Point Speedway Track Champion and Collins, the opening day winner at the speedway. The duo put on a fantastic driving display as they quickly converged on Rushlow for the second position.

The key to an extra distance race at Five Mile Point Speedway is keeping the car straight and patience. Housworth was showing he wasn’t waiting for the second and third place cars during the early going as he widened his advantage. The first caution of the race flew on lap 13 for a spinning Fred Christ. Housworth was still the race leader for the restart with Collins, Rohner, Rushlow and Matt Cole riding in the top five. When racing resumed Housworth continued as the race leader but now he had to contend with both Collins and Rohner. On lap 14 Collins went to the inside of Housworth as Rohner waited patiently to make his move. A caution on lap 17 would slow that battle for the moment.

When the green flew again Housworth was still the race leader but now had Rohner in second with Collins third and Rushlow and now Dale Welty in fifth place. Another caution on lap 22 slowed the action again but on the restart the racing went to another level. Housworth maintained his lead on the restart but now Collins made a serious bid on the inside for the race lead. Meanwhile Rohner wasn’t content to watch as he split the middle making for a three-wide battle for the race lead to the delight of the fans. Collins was scored as the race leader on lap 25 as the battle continued three-wide lap after lap. Back to back cautions on lap 28 again slowed the great action. This restart found Collins as the race leader with Rohner in second, Housworth now third, Welty fourth and Rushlow fifth.

Collins raced back out to the lead when the action went back to green and Welty made quick work of Housworth to take over third. On lap 31 Rohner worked to the outside of Collins and made his move for the race lead. The move worked as Rohner took over the race lead. Collins ran in second with Welty third. A caution on lap 38 again restacked the field but the race would go green for the fifteen circuits without any change within the top five. Alex Yankowski ran just outside of the top five most of the race and continued to keep an on that race battle among the top five as the next caution flew on lap 54. When racing went back to green the top six were unchanged, but the complexity of the race was about to change.


On lap 57 the caution flew as Rushlow slowed with a flat tire at the same time George Sanford also slowed with a tire going down. During the same caution race officials informed Yankowski that he had a soft right rear but Yankowski was now solidly in the top five and opted to stay on the track. On the restart, Welty slowed with a tire going down and now Yankowski had no choice but to also pit. At this point Todd Hayward was in the fourth position with Steve Babicek running in fourth. The top three of Rohner, Collins and Housworth all worked hard as they lead portions of the race and all in attendance were wondering if they could go the distance.

The green flew again and the top five remained intact as the caution flew again on lap 62. This time it was sixth place runner Jeff Bubari losing the battle to tire attrition. Rohner meanwhile was trying to conserve his tires but Collins was not allowing him to take it easy as they maintained their battle for the race lead. Lap 65 saw the final caution of the race as Housworth saw his great drive derailed with a soft tire. Fifth place runner Babicek also pitted on the same lap. When the green flew again Rohner would be able to hold off Collins for the “Great Crate Race” title. Hayward came across the line in third with Welty charging back to fourth and Fred Christ having his best career FMP run in fifth. Unfortunately, Hayward was disqualified in post-race inspection with an illegal carburetor. This moved Crate Sportsman rookie Blaine Klinger up to fifth at the finish. Klinger, had only a handful of Sportsman starts prior the race after running in the Slingshot division for most of the season. Sanford charged back to sixth with Rushlow, Yankowski, Housworth and Schilling finishing in the top ten.

A strong field of Street Stocks were on hand for a $1,000 to win 25 lap special event. Lanson Albanese and Earl Zimmer set the pace at the drop of the green. Zimmer raced out to the early lead but Albanese had other ideas as he worked back by on a lap 4 restart. The racing throughout the pack was outstanding as a number of three and some four wide battles to shape. Albanese led the first half of the race as Zimmer made a number of bids for the race lead. One driver on the move from deep in the field was Don Russell, Jr. Russell started twenty-first and seemed to advance a position almost every lap.

As the race reached the halfway mark the top five consisted of Albanese, Zimmer, Track Champion Doug Polhamus, Ceece and Russell. Ted Morseman had advanced from thirteenth to six at this point. On lap 18 Ceece pulled in to third spot and quickly a three car battle ensued for the race lead. Cecce began to utilize the far outside of the speedway as both Albanese and Zimmer were now locked on the bottom. Albanese had taken over the race lead and held the point by utilizing the top of the speedway. His move to the bottom ultimately would cost him. The final caution of the race flew on lap 21. The top three were unchanged and during the caution Zimmer rode around the outside of the speedway – “testing the waters”. When racing went green Zimmer never got that opportunity as Cecce powered to the outside as Albanese and Zimmer stayed on the low side. On lap 22 Cecce worked past both and in to the race lead. Albanese quickly jumped back to the outside to try and challenge but it was too late. Cecce would go on for his second victory of the season at the speedway. Zimmer took over second on lap 24 and would hold on at the finish. Albanese finished third with Polhamus and Russell rounding out the top five. Morseman finished sixth with Tevor Dudley, Mike Wilbur, Shane Wolf Jr. and Tyler Yeagle rounding out the top ten.

The 40 lap FWD Four Cylinder Fantastic Five $1,000 to win event found Trevor Williams racing out to the early lead. Williams started third but wasted no time taking over the point on lap 1. Nick Kennedy, the 2017 Track Champion started the day off in the point lead for the Fantastic Five race chase but headed pit side during a lap 4 caution. He did return to action without losing a lap. When racing resumed Williams continued to lead but Kenny Underwood quickly took chase after starting in sixth position. Underwood entered the event second in points of the “Fantastic Five” five race challenge. On lap 6 Underwood took over the lead and would never relinquish it. Kennedy saw his title hopes extinguished when he pulled to the infield on lap 23 of 40. Underwood led the balance of the race to lock up the “FWD Fantastic Five Four Cylinder” Championship. He also earned a cool $1,000 for the victory. Adam Gilbert finished second after starting in tenth place. Lightning Cat Novice Track Champion Brian Salmini finished an impressive third at the wire. Josh Wilder had a strong run in fourth with Rich Wagner coming home in fifth. Randy Lane, Williams, Mat Mather, Greg Slater and Rick Lunn completed the top ten.

The 20 lap Factory Stock event saw a bit of everything that included great three and four wide racing, several cautions and a wild finish at the stripe. On lap 9 three separate caution flags shuffled the field dramatically. Eight different teams entered the pit area just on the lap 9 caution. When racing resumed only one caution would slow the duration of the feature. Jerry Lobdell was the early race leader in the local famed “57 Chevy” bodied entry. Lobdell led the first 9 circuits until Buck Mills Sr. made contact as they battled hard for the race lead. Lobdell spun and collected Mills, Ray Lindquist and Jeremy Williams. During this same caution Grayson Albanese pitted with a flat tire. When things cleared up the race leader on lap 10 was Nate Hill. Hill was coming off his best FMP finish back on October 7th. Hill held the point until lap 15 when Tom Groover made his move in to the race lead. The final caution flew on lap 16 as Lobdell and Levi Frink got together. On the restart Groover continued to lead but all eyes were on Albanese as he had been working his way from the back after an earlier flat tire. Groover ran the high side lap after lap as Albanese closed in on the bottom. On the final lap Albanese dove in to turn 3 on the bottom and tried to pull a slide job for the race lead on Groover. Groover held the preferred outside line and Albanese slid in to his front end putting both of them in to the wall as they crossed the finish line. Although Albanese crossed the line first Groover was credited with the win by race officials due to the excessive contact by Albanese. Groover collected $400 for the victory with Albanese being credited for second. Jeremy Williams raced from the rear of the field on lap 9 to finish third. Hill ended up fourth with Tim Parker finishing in fifth.