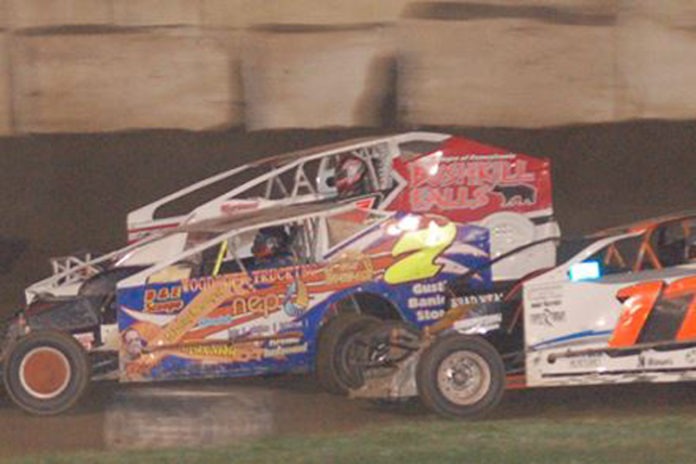 KIRKWOOD, NY – Despite the best efforts by the staff at Five Mile Point Speedway the 68th consecutive season opener has been postponed due to oversaturated grounds. The season opener will now be held next Sunday, April 8th. An open practice will still be held this Saturday, March 31st for the race teams between 2 and 5 p.m. For spectators they can check out the practice with the donation of a non-perishable food time to benefit CHOW. Racing on Sunday, April 8th will begin at 3:30 p.m.

Just two weeks ago snow drifts covered the speedway surface and snow was over the retaining walls. Track crews have worked feverishly to have the speedway surface ready to go for the big opening day and ultimately accomplished that feat. The parking lots, however remain oversaturated which will not permit a full racing program on Saturday. There will still be a practice session for teams beginning at 2 p.m. as they test out the brand-new clay surface put down this off-season.

The focus of the full opening day weekend now shifts to next Saturday and Sunday, April 7th and 8th at Five Mile Point Speedway. On Saturday another round of practice will be held for the race teams from 1 to 4:30 p.m. On Sunday, April 8th the speedway will officially swing their gates open for the 68th year in a row with a big racing program at 3:30 p.m. No activities are scheduled this Sunday in observance of Easter Sunday.

In 1951 Anna and Irving Heath opened the historic Five Mile Point Speedway. The race is one of the oldest consecutively operated speedway’s in the entire Unite States. This season will mark the 68th consecutive year of racing. Andrew Harpell, the current owner of the speedway is the grandson of track founders Anna and Irving Heath.

The 2018 racing season at Five Mile Point Speedway is expected to be one of the biggest in many years. During the off-season a huge track renovation took place during the month of December. Hundreds of truck loads of new clay were put down on the quarter mile oval during the off-season. The huge investment has already paid off as dozens of new teams are calling Five Mile Point Speedway home this season.


For additional information please phone 607-775-5555 or log on to www.5milepointspeedway.com. You may also email the speedway directly at fivemilepoint1@aol.com. Complete pricing, order of events and race rules can be found on our website. Five Mile Point Speedway – “The Home Speedway of the Southern Tier” where kids 12 and younger are admitted FREE to every race event!