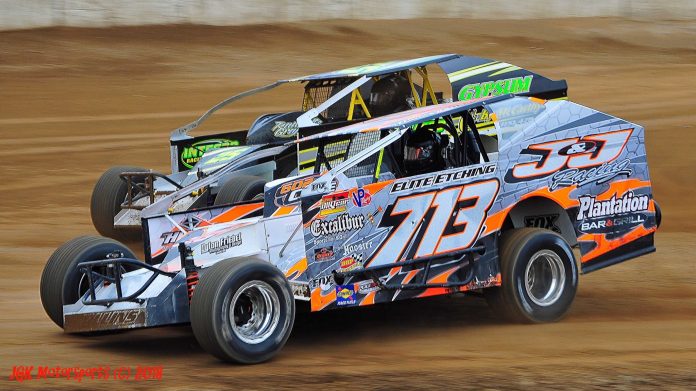 Brandon Butler and Collins led the twenty-six car starting field to the start of the 25 lap GRIT Crate Sportsman feature event. Butler led the first circuit but his lead would be short lived as Collins took over on lap 2. For Collins, it would be a lead he would not relinquish. The first caution of the event occurred on lap 5 for Tyler Thompson. He would not return to competition. When racing resumed Butler applied the pressure to Collins for the race lead but Collins was up to the challenge. Butler quickly had to contend with pressure for the second position as Kenny Peoples, Dale Welty and Randy Brokaw closed in. Peoples took over second place as Butler drifted wide and several followed.

By lap 10 early season sensation Alex Yankowski was up to fourth place from his eighth place starting spot. Yankowski joined the intense battle among the Peoples, Welty and Brokaw. As the race for second was intense Collins was able to open up his lead on the field. On lap 13 the caution would fly as Butler came to a stop in turn 4. The caution would fly again on the next circuit for a multi-car tangle in turns three and four. Todd Titus emerged with the worst of the damage as new car was “cradled” off the track with two trucks.

When racing continued Collins again pulled ahead as Peoples, Welty, Yankowski and now Corey Cormier battled for second. With Collins in command, the battle for the top five slots changed lap after lap with multiple two and three wide battles for position. Donnie Lawson began a big charge forward as the racing up front was fantastic. On lap 21 Lawson made an aggressive multi car low side pass but it would not stick as Peoples made contact in turn 4 sending him around. Peoples would be restart at the back of the field and Lawson retired pit side. On the same lap Yankowski pitted with a flat tire after earlier contact slowed his strong drive.

Again, the top spots were shuffling like a deck of cards during the final laps. Collins held the point with Welty in second and Dave Marcuccilli in third. Stacey Jackson was now up to fourth after starting thirteenth with Cormier in fifth. When racing resumed on lap 23 Welty stayed close with Collins but he was unable to make a move for the lead. At the finish it would be Collins repeating as an opening day winner at FMP. Welty wound up second as he came up one spot short again of his first FMP victory. Marcuccilli finished third with Jackson and Cormier rounding out the top five. Josh Keesey finished sixth after starting twentieth. Will Shields arrived late at the speedway, qualified through the consolation and drove from twenty-second to seventh at the finish. Tim Guild started twenty-first and wound up eighth. Randy Fox advanced from seventeenth to ninth with Randy Brokaw rebounding for tenth after pitting earlier in the event.


The Street Stocks held their first Summer Slam event of the season on Saturday and it was Earl Zimmer continuing his special event domination at FMP. Zimmer had an intense battle during the first half of the race with early race leader Butch Green as the two swapped leads several times. The second half of the race saw a great battle between Zimmer and Shane Wolf, Jr. Wolf started eighth and made his late race patented charge forward.

Zimmer utilized the extreme outside of the quarter mile oval during the final five laps as Wolf used the low side lap after lap. The two put on a great battle but it would ultimately be Zimmer’s day as he held on for the victory. Wolf finished second with Green finishing fourth. Buck Mills Jr. drove from the back to fourth in a solid effort. Defending Track Champion Doug Polhamus rounded out the top five.

Kenny Underwood, the defending Fantastic Five Front Wheel Drive Four Cylinder Champion took the early race in the 20 lap feature event. Underwood led the first circuit with Jeremy Warren taking the lead on lap 2. His lead was short lived as Batzel took command on lap 3 after starting in the third spot. All eyes were on eighth place starter Nick Kennedy as he quickly began to advance through the field. Kennedy, from Windsor, was the weekly Lightning Cat Expert Track Champion.

Batzel and Kennedy continued their great battle for the race lead lap after lap. On lap 16 Batzel drifted wide slightly and Kennedy wasted no time to work past for the race lead. Batzel tried to rally back but Kennedy looked to have things going his way. On lap 18 Kennedy saw his great drive literally go up in flames. The car began to smoke heavily as race officials directed Kennedy to the infield over the in car radio communications system. As Kennedy began his entry in to the infield area the car erupted in to flames. Fortunately, the Five Mile Point Fire Department was ready and waiting for him and quickly extinguished the fire.

When racing resumed Batzel held off Jimmy DiFulvio for the final lap to capture the popular victory. Batzel was driving the car normally piloted by Mike Start. For DiFulvio the second place finish had to be satisfying after starting back in tenth place. Gilbert wound up third with Jake Maynard racing from seventh to fourth at the finish. Underwood finished fifth.

Adam Mudge also from Kirkwood made an opening day statement in the Xcel 600 Modified Summer Slam Tour event. Mudge took the lead from Kevin VanValkenburg on lap 6 to record his first ever feature victory on Saturday. Once Mudge took over the point he was not challenged over the balance of the 20 lap feature event. VanValkenburg finished second with Doug Windhausen, Bailey Boyd and Korey Inglin completing the top five.