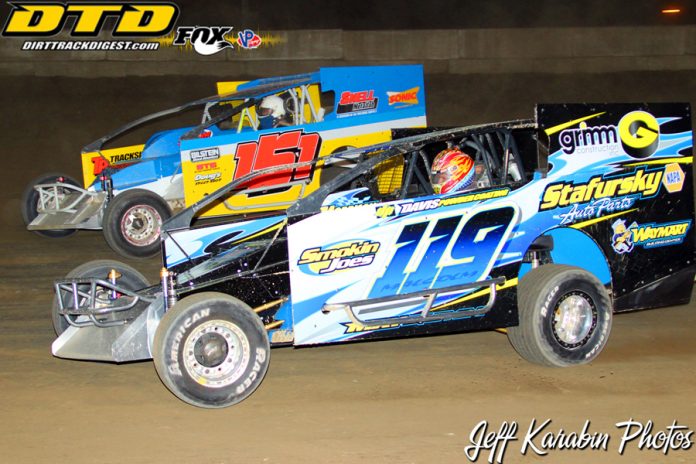 KIRKWOOD, NY – Brian Malcolm returned to Modified victory lane at Five Mile Point Speedway on Saturday for the first time in several years. His victory came in dominating fashion as he led 27 of the 30 laps in the main event. Alex Yankowski returned to victory lane for the second time this season after a late race pass of Brad Cicio in the Crate Sportsman 20 lap feature event.

During the off-season it was well documented that a number of new and former Modified teams made plans to compete weekly at Five Mile Point Speedway. Those drivers have had a huge early season impact on the action at the quarter mile. Joey Colsten has recorded to back to back point season Modified wins after only racing part time at FMP in 2017. On Saturday he entered the night as the point leader. Rusty Smith another driver that has made Five Mile Point Speedway his weekly home entered the evening second in the point rankings. Brian White returned to the speedway as a first year Modified chauffeur on the quarter mile and picked up the win on June 2nd and this past Saturday it was Brian Malcolm’s turn. Malcolm returned to weekly competition this season and promptly put the 119 in victory lane.

The shakeup in the Modified ranks has been enormous thus far in 2018 and on Saturday many of the heavy hitters were starting in the front half of the field for the 30 lap Modified feature. Travis Smith and Barry White led the field to the green with White getting the advantage at the start. Two early cautions slowed the action with the first coming on lap 2. Tyler Siri got together with Travis Smith and Smith spun in front of the field in turn 4. Fortunately, everyone escaped contact in what could have been a major early race pileup. When racing resumed it was short lived as a viscous wreck occurred on the backstretch triggered when Glenn Knapp bounced off the wall exiting turn 2. As Knapp bounced off the wall the car came across the speedway collecting Dan Allen and sending him flipping over top of Siri. Dan Solomon and Kevin Smith were also involved. The field went under red flag conditions and fortunately Allen emerged uninjured from the melee.

When racing continued White held the point but Malcolm made his move from the fifth starting slot to take the point lead on lap 4. White had a huge push in his car in turn 1 and lost several spots as P.J. Goodwin and Mike Colsten raced to the inside. Colsten had started sixth and looked fast from the start. Nick Rochinski ran in the fourth spot from his eighth starting slot and Barry White held on to fifth during the first quarter of the race. With several laps of green flag racing Malcolm quickly expanded his race lead over Goodwin as numerous two and three wide battles occurred throughout the field. Brian White, Rusty Smith and Shaun Walker were also making their moves forward from their ninth, tenth and eleventh place starting spots.

On lap 12 the caution flew as Walker was spun in turn one temporarily derailing his strong run. Walker made it known he was unhappy with Brian Weaver who had apparently lost his brakes initiating the contact with Walker. Weaver headed pit side to address the issue but did not return to action. During this same caution Mike Colsten headed pit side as did Kevin Bates. Both returned prior to the restart.

Malcolm set a torrid pace when racing resumed to green flag action as Goodwin held the second slot as now Rochinski and Smith battled tooth and nail for third place. Malcolm checked out from the field as battles took place all over the quarter mile and Walker began his charge after restarting at the back of the field. On lap 19 the final caution of the race flew as Bates slowed and Brian Puckett headed to the infield with a blown motor. On the restart Malcolm wasted no time pulling away again as Smith was now challenging Goodwin for second place. The final circuits for Malcolm were uncontested as the race for second place was intense. At the finish Malcolm crossed the line almost a straightaway ahead of the field. Goodwin held off Smith for second. Rochinski finished in fourth with Brian White taking fifth place. Donnie Elliott grabbed sixth with Walker rallying to seventh at the stripe. Travis Smith, Barry White and Alan Kellogg completed the top ten.

The 20 lap Crate Sportsman feature event was a thriller as the teams raced caution free for the first half of the race then went wild for the second half. Brad Cicio immediately took the race lead from Tom Hampton at the start of the feature event. Cicio looked strong as he opened up a quick early advantage over Hampton. Hampton battled with Tim Howell and rookie Tyler Peet during the early stages as they had a great race up front. Multi-time winner Tommy Collins, Jr. began to pick his way from his ninth starting slot as Alex Yankowski was following him up from the tenth slot. Tanner Harpell entered the night as the point leader but started deep in the field in eighteenth. On lap 10 the first caution of the race flew as Todd Titus made contact with Randy Fox sending him spinning in turn one and collecting Matt Cole in the process.

At this point Cicio looked dominant as Howell ran in second and both Collins and Yankowski had advanced all the way to third and fourth respectively. Peet maintained his great run in fifth. Cicio maintained his race lead as a number of cautions slowed the pace during the second half of the race. On lap 14 the caution flew as last weeks winner Leo McGurrin and Pat Jordan tangled and slammed the wall exiting turn 2. Both were eliminated from competition. On the restart Yankowski swung past both Collins and Howell to take over the second slot as the caution flew again a lap later. When racing resumed Cicio held his lead but Yankowski quickly pounced as they duo ran in turns three and four. Yankowski caught Cicio by surprise as he made contact with the race leader and took over the point. The final caution of the race flew on the next lap for Joe Guastella as Yankowski was penalized one position for the prior contact. This put Cicio back on the point for the restart. Cicio led the next two circuits but Yankowski drove underneath to take the race lead with only two laps remaining. Yankowski went on for his second win of the season at FMP. Cicio wound up second over Howell, Collins and Peet. Hampton had a solid run for sixth with Kyle Pierce, Connor King, Harpell and Blaine Klinger completing the top ten.

Ray Lindquist raced to his first ever Five Mile Point Speedway victory in the 20 lap Street Stock feature event on Saturday. Lindquist took the lead from last weeks winner Tyler Yeagle and led the second half of the race on his way to the first FMP win. Yeagle wound up second with Doug Polhamus, Steve Polhamus and Keith Beach rounding out the top five. The race was slowed by only one caution flag period.

Bailey Boyd took the lead form Damon Henry with only two laps remaining to record back to back wins in the Xcel 600 Modified main event. Boyd started twelfth on the field at the start of the 20 lap feature event. Henry finished second with Kevin VanValkenburg advancing from eighth to third at the finish. Rich Christman and Geoff Sutton rounded out the top five.

Jake Maynard was the Lightning Cat Expert feature winner on Saturday for his first of the season. Joshua Wilder led the first 14 circuits only to blow a motor on the final lap while leading. Maynard bested Nick Kennedy, Bob Kress, Adam Gilbert and Kenny Underwood at the finish.

Charlie Towner took top honors in the Factory Stock 15 lap feature event on Saturday. Towner was followed across the line by Charlie Gilbert, Alan Komar, Ryan Brockner and Bradley Marvin. Randy Lane was the winner of the Lightning Cat Novice 12 lap feature event and Kaden Ayre was the first ever winner of the Xcel Junior Modifieds on the inner loop.

This Saturday Five Mile Point Speedway will host an open practice at 5 p.m. On Sunday things heat up with the return of the Sunday Summer Slam and the Dick Longstreet Memorial for Modifieds. That 41 lap special event will pay an impressive $4,100 to win. Racing on Sunday begins at 6 p.m.

COUNTER POINTS…Once again over 120 race teams filled the Five Mile Point Speedway pit area for the Kirkwood/Binghamton Community Night…Another large crowd witnessed a great night of action as again the quarter mile oval surface was in outstanding shape…Brian Malcolm behind the wheel of a Troyer Modified commented about the racing conditions in victory lane, “The track is awesome, I could put the car anywhere I wanted to and we have had no tire wear at all this season.” Travis Smith rebounded from his early race spin in the Modified main for his best FMP finish in eighth as the youth movement continues in the class…Rookie Tyler Peet continues to impress in the Crate Sportsman division with a quiet fifth place finish as the lead rookie Alex Yankowski collected win number two…The loudest victory lane ovation of the evening came for youngster Kaden Ayre who won the first ever Xcel Junior Modified inner loop feature race…