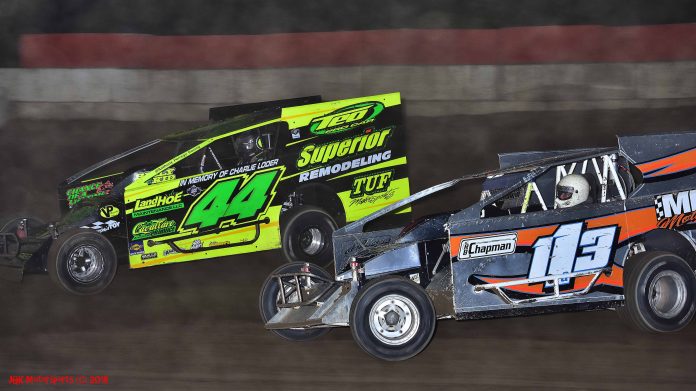 KIRKWOOD, NY – It’s hard to imagine that summer is speeding by so fast but this Sunday is round three of the four race Shakelton NAPA Auto & Truck Parts Modified Summer Slam at Five Mile Point Speedway. A big program will join the Modifieds this Sunday including the return of the popular Summer Slam Wingless Sprints. Racing begins at 6 p.m.

Anthony Perrego has gone a perfect two for two in the so far in the Shakelton NAPA Auto & Truck Parts Modified Summer Slam portion. His most recent win came back on June 17th with the victory in the huge Dick Longstreet Memorial 41 lap special. This Sunday’s race will be 30 laps in distance paying $2,000 to the race winner.

Perrego currently leads the Sunday Summer Slam Modified point standings over Dan Creeden, Brian Weaver, Shaun Walker and Nick Nye. Nick Rochinski, Brian Malcolm, Mike Colsten, P.J. Goodwin and Matt Roberts make up the top ten in the Modified rankings entering this Sunday. The point format virtually makes the last race in September the most important as bonus points are awarded and a lot can change. Of course, teams are geared up for this Sunday to try and better their positions entering the September finale.

The Wingless Sprint Cars for the first time have had two Sunday Summer Slam events to date this season at Five Mile Point Speedway. Eric Jennings, from New Jersey has won both to date over Thomas Radivoy. The two friends have had outstanding finishes with Jennings winning on the final laps in both races. Dana Wager, Jeremy Quick and Heidi Hedlin complete the top five in the standings entering this Sunday. The division has quickly gained sizeable fan support during the first two stages of the Sunday Summer Slam program.


Much like Saturday night’s Tommy Collins, Jr. is showing the way in the Crate Sportsman Sunday Summer Slam points entering this Sunday. Collins is also the weekly track point leader in the division. Alex Yankowski, Randy Brokaw, Tanner Harpell and Matt Cole make up the top five in the current standings. This Sunday’s race is a 25 lapper paying a cool $1,000 to win.

Shane Wolf, Jr. leads the way in the Sunday Summer Slam for Street Stocks. Earl Zimmer, Butch Green, Doug Polhamus and Doug Stack Jr. make up the top five in the current standings. The race this Sunday will pay an impressive $650 to win for the Street Stock races. There is also a $100 bonus to the top finishing Factory Stock on Sunday.

For additional information please phone 607-775-5555 or log on to www.5milepointspeedway.com. You may also email the speedway directly at fivemilepoint1@aol.com. Complete pricing, order of events and race rules can be found on our website. Five Mile Point Speedway – “The Home Speedway of the Southern Tier” where kids 12 and younger are admitted FREE to every race event!