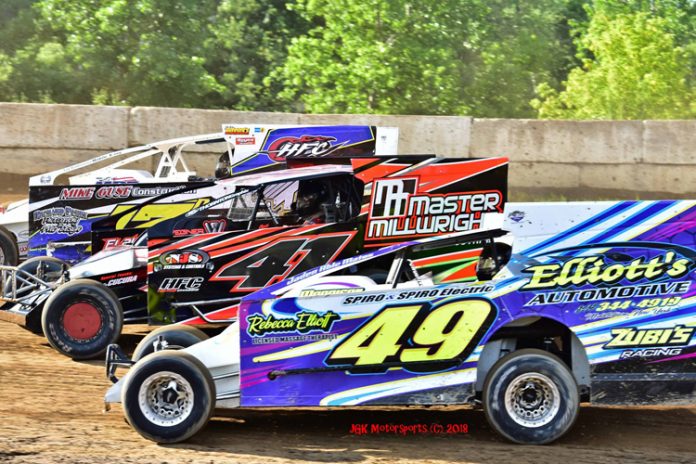 Elliott and Glenn Knapp led the Modified starting field to the green flag for the start of the 30 lap feature event. The start proved to be important as Elliott got the advantage immediately. Elliott ultimately led all 30 laps wire to wire in the caution free event but a late race challenge from Shuan Walker and tricky lapped traffic certainly made the final laps exciting.

During the early stages of the Modified main Elliott opened up his lead quickly. Walker wasted no time as he advanced from fourth to second in the first two laps. Brian Weaver also followed his lead as he moved from fifth to third on the first two laps. A number of terrific battles took place throughout the field as the racy and wide quarter mile surface provided for excellent racing action.

With the race going caution free Elliott first approached lapped traffic on lap 16 as he worked past David Doig, Jr. Both Elliott and Walker were glued to the bottom of the speedway as it was another five laps before the leaders caught Brad Shaffer. Once Elliott worked to the inside of Shaffer and moved past he again opened his advantage. Shaffer was fast on the top as Walker struggled to clear him in the pursuit of Elliott. It took Walker until lap 28 to make his way past Shaffer and he immediately locked in on the race leader Elliott. On the final two laps Walker pulled within striking distance but ran out of time as Elliott collected win number one on the season. For Walker, the second place finish was his best of the season with Weaver taking third at the stripe. Two-time winner Joey Colsten finished fourth with Nick Rochinski advancing from eighth to fifth at the finish. The point lead battle between Rusty Smith and Brian Malcolm was won by Malcolm on this night. Malcolm finished seventh with Smith settling for eleventh at the finish.

The annual “Little Mike’s Race to Win” for UMP/IMCA style Modifieds is always a very special event at the speedway. The race honors former Track Champion Mike Stolarcyk, III who passed away nine years ago. James Cornell brought out his Chuck Akulis paint scheme “Pink Panther” body for this special event. The throwback paint scheme brought back a lot of memories for race fans in what is already an emotion filled race each year. On the track Cornell took the lead on lap 1 from his fourth starting slot and led every lap. Much like the Modified race a late race charge by second place runner Jake Maynard proved to be exciting during the final two laps. Maynard closed the gap over the final laps but was not able to make a serious bid for the win. For Cornell the victory was worth $1,000 and very emotional. This is a race that everyone wants to win. In addition to the emotion of the annual race for James Cornell it was even more meaningful as the victory was dedicated to his mom who is battling very serious health issues currently. The race was slowed by only one caution.

Tim Howell raced to his first Crate Sportsman victory of the season on Saturday. He held off Kyle Pierce over the final laps to record the win. Pierce finished second after starting sixth. Current point leader Alex Yankowski finished third after starting ninth. Matt Cole was doing “double duty” also racing in the “Little Mike’s Race to Win”. Cole collected fourth in this one. Rookie Tyler Peet had another strong drive for fifth place at the finish. 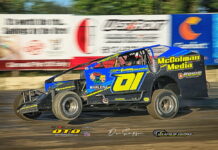