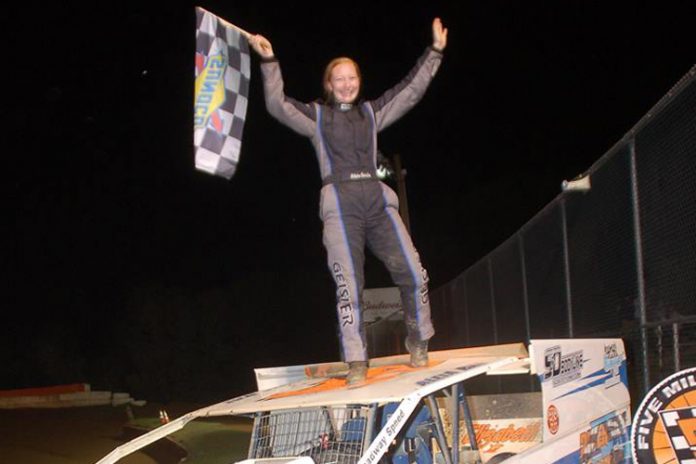 Entering Saturday night emotions were already running high throughout the region. The speedway had been silent since July 28th and heavy rains throughout the week left portions of the region devastated. The town of Kirkwood was once again hit heavily by flash flooding during the week and area residents in attendance were simply looking for any diversion from the past week. Aleia Geisler certainly provided that for those in attendance. Two Modified feature events were on tap on Saturday night due to the Saturday, July 21st event being rained out after lap 8.

In the regular scheduled 30 lap Modified feature event Dave Doig, Jr. and Aleia Geisler started on the front row. Geisler motored out to the lead on lap one as Doig settled in to second place. The early going was a rough and tumble affair as six cautions slowed the pace in just the first six laps for mostly minor incidents. When things settled down, the racing was outstanding as only one more caution would fly over the final 24 laps of the feature. On the lap six restart Geisler pulled away from second place runner Brian Puckett who had charged from the fifth starting spot. The same occurred on the final restart of the race on lap 10 as Geisler opened her lead up over Puckett.

The last 20 laps saw Geisler drive a flawless race as Puckett continued to run in second place. The only potential moment of anxiety was when Geisler approached the lapped car of Nick Rochinski (was running a borrowed car) after he was had blown a motor in his car earlier in the evening. Rochinski ran his line and Geisler easily navigated past as Puckett was only able to momentarily close the distance on the race leader. On the final lap the fans were on their feet as they cheered Geisler across the finish line for her first feature win at the speedway and as she became the first ever female Modified feature winner. Puckett finished second with Mike Colsten coming across in third. Brian Malcolm took over the point lead with his fourth place finish and Joey Colsten rebounded with a fifth place finish after dropping out of the earlier feature event.

In the held over Modified feature event 8 laps had been completed back on July 21st prior to the rains washing out the balance. Barry White was the race leader on that night and he and Nick Rochinski brought the field to the green on the lap 8 restart this past Saturday. White jumped back out to the race lead when the green flew with Rochinski in tow. Three laps were completed when P.J. Goodwin spun in turn 3 bringing out the yellow flag. Rochinski used the restart to his advantage taking over the lead when racing resumed. Rochinski quickly left the field behind as White developed a push in his car that saw him lose the runner-up slot. Mike Colsten moved in to second on lap 13 and slowly began to close the gap on the race leader.


Rochinski initially opened up his race lead but as the green flag laps clicked down Colsten began to close in on the Dickson City, PA driver. On lap 27 the caution flew for the second and final time as Dan Solomon slowed with a broken front end in turn 3. Rochinski had another strong re-start and pulled away from Colsten when racing went green. Rochinski maintained his advantage as he went on for the victory. Colsten finished second with White, Donnie Elliott and Rusty Smith completing the top five.

The Xcel 600 Modified teams had a very special event on Saturday with a lot of extra money up for grabs. The Joshua Henry Memorial event, a 29 lap feature event was a tribute to the 8 year old boy that lost his life in a motor vehicle accident in 2012. His brother, Damon had earned one feature win earlier in the season and led the 28 car field for the parade lap before falling in to position. When racing began Tyler Smith out raced Adam Mudge to the race lead. The early racing was certainly action packed as three and four wide battles took place all over the speedway. The first caution of the race flew on lap 7. On the restart current point leader Bailey Boyd over took Smith for the race lead. Smith was not deterred as he remained within striking distance.

Several cautions slowed the action during the balance of the 29 lap feature event as the front duo continued to put on a great display. On lap 28 Smith pulled to the inside of Boyd as he looked to take the win. Unfortunately for Smith, the caution flew for the final time eliminating the strong bid. On the restart Boyd had a good restart and Smith made one last attempt but was unable to make it stick. Boyd went on for the victory with Smith, Richie Hitzler, Korey Inglin and Tyler Bartik completing the top five. Damon Henry earned the “Hard Charger Award” after starting 25th and winding up in 12th at the end. The Henry presented Boyd with a six foot trophy, added money to the top three finishing positions and raised over $2,000 in bonus lap money.

The 20 lap Crate Sportsman feature event saw Brad Cicio and Todd Titus on the front row for the start. Titus jumped out to the early race lead as multi-time feature winner Alex Yankowski began his advance from the seventh starting spot. A caution on lap 7 regrouped the field with Titus the race leader and Yankowski already up to second place. On the restart Yankowski took advantage as he raced out to the lead on lap 8. The caution came out for the final time one lap later and on the restart Yankowski pulled back in to the race lead. The final 12 laps went caution free as Yankowski pulled away from the field. Titus stayed within distance of Yankowski while a great battle among two other first year drivers took place for third and fourth. Russell Benke and Tyler Peet. Yankowski went on for the win with Titus finishing second. Benke held off Peet for third with Matt Cole finishing fifth.

Doug Polhamus, the defending Street Stock Track Champion made a statement on Saturday as he led wire to wire in the 20 lap feature event. Polhamus started in second and charged past Keith Beach on lap 1. At the finish it was Polhamus over his team mate Matt Bowman. Doug Stack, Tyler Yeagle and Ray Lindquist completed the top five.

Caleb Lacey led the entire distance of the Lightning Cat Expert 15 lap feature event on Saturday for his first ever win. Lacey, is a true “rookie” in the division and held off multiple time winner Jimmy DiFulvio for his first win. Another rookie in the division, Brian Salmini finished third with Nick Kennedy and Jake Maynard completing the top five spots. Tom Groover raced to his second Factory Stock victory of the season. Groover took the lead in the 15 lap feature on lap 6 and held off Charlie Gilbert during the late stages. Steve Lunn was the Lightning Cat Novice feature winner. Lunn took the lead from Walter Decker on lap 5 and went on for the 12 lap feature win.

COUNTER POINTS…139 race teams jammed the Five Mile Point Speedway pit area on what was yet another challenging weather race day…Flooding occurred in the town of Kirkwood on Monday and record flooding followed on Wednesday of this past week…On Saturday morning heavy rain swept through the area flooding towns to the north and making track preparation challenging…Despite all the challenges the speedway surface was extremely smooth and racy throughout…A collection was taken for Cindy Cornell who is battling health issues and over $1,200 was raised between this past Saturday and July 21st when the action was rained out…Jeremy Williams made a great gesture by allowing Nick Rochinski to continue his pursuit of the Modified Track Championship…After winning the first feature of the night Rochinski blew the motor in his car…Willilams scratched from the Sportsman feature allowing Rochinski to drive his car in the Modified main…

This Saturday is the final point race of the 2018 season at Five Mile Point Speedway. Track Championships will be decided in all classes with racing set to begin at 6:30 p.m. For more information please phone 607-775-5555 or log on to www.5milepointspeedway.com.