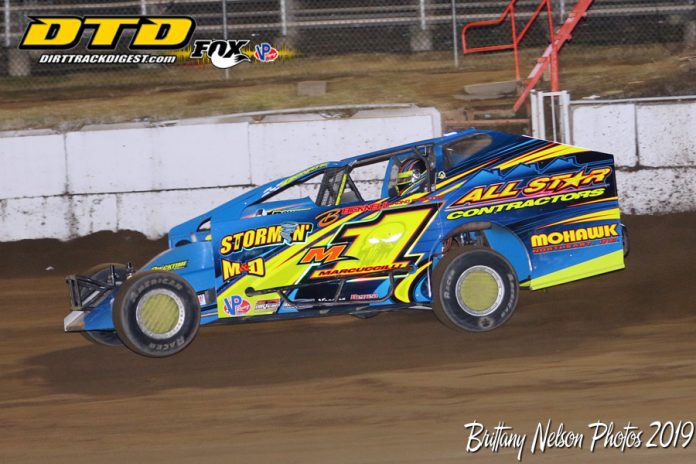 KIRKWOOD, NY – Ajay Potrzebowski Jr. and Corey Cormier led the GRIT Series INSINGER Crate Sportsman to the green. On the start, going into turn two the front of the pack was full of door banging getting them all jumbled but they all kept going. A short time after the yellow flag was flown putting Cormier and Marcuccilli on the front row. After the restart, there were many battles happening throughout the field. The next caution was brought out on lap seven with a pile up with the back of the field in turn four. Marcuccilli made his move taking the highside around Cormier to take the lead on the lap seven caution restart. The restart after the lap thirteen debris caution, Jimmy Zacharias took over the second position over Cormier. Zacharias then began to close in on Marcucilli for many laps but never could get by him. Marcucilli ended up claiming the victory over Jimmy Zacharias, Randy Brokaw, Ryan Macartney, Randy Fox, and Tyler Peet after a long 30 laps. This was Dave Marcuccilli’s first ever win at the track after numerous appearances.

Factory Stock field was led to the green by Ray Lindquist and Buck Mills Jr. Until the final laps, the race was tremendously trouble plagued. After a handful of cars had experienced either mechanical problems pulling numerous cautions and several lead changes. Once the checkered flag flew, Jerry Lobdell Jr. picked up the win over, Ray Lindquist, Charlie Gilbert, Andy Brigham, and Charlie Towner.

The XCEL 600cc Modifieds were led to the green by Zack Mills and Hunter Deihl. As soon as the green flag flew Adam Mudge flew past the leaders taking the lead in turns one and two and never looked back even when lap cars came into play. Adam Mudge picked up his second consecutive opening night win at Five Mile over Jared Green, James Randall, Chelsie Beebe, and Nolan Smith.

Tyler Yeagle and Jerry Lobdell Jr. led the Street Stock field to the green. Tyler Yeagle took the lead on lap one and never looked back. Jerry Lobdell Jr., Shane Wolf Jr., Dan Force, and Doug Stack Sr. rounded out the top five in the caution free 20 lap Street Stock feature. We would like to thank Doug’s Speed Shop for the $100 bonus they put up for the winners share.

Lightning Cat Experts were led to the green by Kenny Underwood and Eric Rowley. Soon after Nick Kennedy took the highside to pass Eric Rowley for the lead. The field went caution free for the first half and was very spread out throughout. A few cautions had flown but the action came during the final laps as there was a three-wide battle for the second-place position. Nick Kennedy ended up with the feature win over Trevor Williams, Kenny Underwood, Eric Rowley, and Keith Potter.

Brian Malcolm took home the win in the Modified Dash for Cash that was added to the schedule during the week. Not only did he take home some money from our wonderful sponsors. Malcolm also gets a redraw spot for the Doug Worthing Tribute night Modified 46 lapper, running April 20th. We would like to thank Sharky’s Fuels, Country Town Auto Service, French’s Auto Parts, Bradley Tokarz, Dave and Tyler’s Auto Service, and an anonymous race fan for sponsoring the dash.

REMINDER: There is no racing next week (April 13th). We will be back racing on April 20th for the Doug Worthing Tribute night presented by Stockholm’s Barber Shop located in Binghamton, NY. The Modified race will be 46 laps paying $2,063 to win. Also, racing that night are the INSINGER Crate Sportsman, Factory Stocks, Four Cylinders, and XCEL 600cc Modifieds.