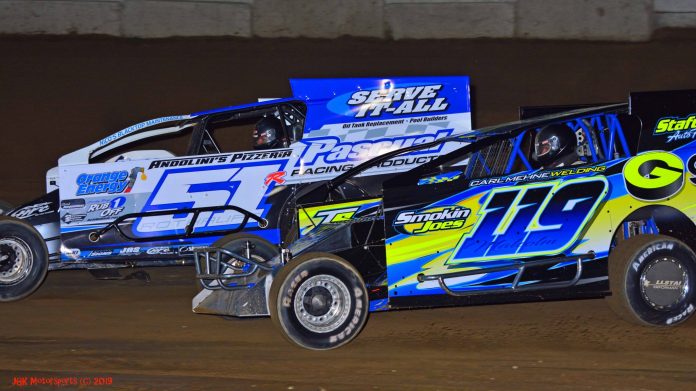 KIRKWOOD, NY – For the second race in a row, Lake Ariel, Pennsylvania’s Brian Malcolm has parked his number 119 in the Sunoco Modified Victory Lane. Malcolm needed all 30 laps to get the job done as his pass for the win took place directly under the checkered flags. Binghamton’s Travis Smith led the majority of the feature, but a late race lane change proved to be costly opening the door for Malcolm to race by on the outside. Mike Nagel Jr also found the outside of the speedway to his liking, as he raced to his first feature win of the season in the Insinger Performance Sportsman 20 lap feature. Nick Kennedy returned to victory lane in the Belgray Oil 4 Cylinder division, while Walter Decker picked up the win in the Belgray Oil 4 Cylinder Novice class. Buck Mills Sr was victorious in the Factory Stock main event, while Zack Mills picked up his second consecutive win in the Xcel 600 feature. The Xcel Jr division was won by Joshua Landers.

Kenny Hildebrant and Brad Shaffer led the 23 car Sunoco Modified feature to the green flag. On the initial start, Hildebrant quickly jumped out to the advantage. The first caution flag flew quickly, just two laps into the 30 lap main event. On the ensuing restart, 4th place starter Travis Smith made a quick pass on the inside moving himself up to second. As the race continued, Hildebrant maintained the top spot while Smith began closing the gap. The race remained green until lap 11, when the next caution flag flew for a spinning Dan Soloman. As the field reassembled, Hildebrant was scored the leader, while Smith, Shaffer, Malcolm, and Barry White completed the top 5. Hildebrant elected to take the inside for the restart leaving Smith to line up on the high side. As the green flag flew once again, Smith wasted no time taking his Harpursville Farm and Garden sponsored 33t to the top spot. Smith found the outside to his liking and quickly opened up a healthy advantage over Hildebrant. As the race reached the halfway point, Brian Malcolm made it apparent that he had some serious speed in his 119 machine. Malcolm started 15th on the grid and quickly raced his way up to second on lap 15.

Smith maintained nearly a half straightaway advantage over the field until the third caution flag on the evening flew on lap 17 as early race leader Kenny Hildebrant slowed to a stop on the homestretch. On the ensuing restart, Smith chose the outside line, giving the inside to Malcolm. When the field took the green on lap 17, the decision to take the outside proved to be the right one for Smith. Malcolm began to pressure Smith lap after lap, but Smith was able to hit his marks and maintain the advantage on the top side of the multi-groove speedway. The race continued under green for several more laps with Malcolm pressuring Smith for the top spot. While the leaders raced hard for position, Barry White maintained the third position, while Randy Green raced his way up from 10th on the starting grid to run in the fourth position, with Rusty Smith making his way into fifth.

The field was halted once more on lap 27, giving the drivers a chance to bunch back up with just 3 laps remaining. Travis Smith was scored the leader with Malcolm, White, Green, and Rusty Smith completing the top 5. As the field took the green with three laps remaining, Smith decided to move from the outside lane in which he had ran most of the night. Smith was still able to hold off a hard charging Malcolm in the closing laps. Malcolm took the lane change as an opportunity and went to the outside in an attempt to find a way to get by Smith. As the leaders took the white flag, Smith was still scored the leader, but Malcolm was a very close second on the outside of the speedway. With the checkered flags flying, Malcolm got a huge run out of turn 4 and passed Smith at the stripe by just inches. The win for Malcolm notched two in a row for the defending track champion, while denying Smith the sought after first career Modified win. Malcolm, Smith, White, Rusty Smith, and Scott Landers rounded out the top 5.

After an engine failure early into the season, Mike Nagel Jr finally had things fall his way as he raced to the 20 lap Insinger Performance Sportsman main event. Tyler Peet and Randy Brokaw brought the field to the green, with Peet taking the advantage early. In the early stages of the race, the top two remained unchanged, while eventual winner Nagel quietly ran just outside the top 5. After two quick cautions occurred on laps 9 and 10, Nagel took his NEP Wireless Sponsored M7 Machine to the outside of the track. Just two laps after the restart, Nagel moved into second and began to chase down the race leader Peet. Peet held Nagel off until lap 14 when a move to the outside proved to be what was needed for Nagel to take the advantage. With 5 to go it was Nagel in front with Peet, Brokaw, Todd Titus, and Randy Fox rounding out the top 5. When the checkered flags flew, Nagel Jr picked up the win over Peet, Corey Cormier, Brokaw, and Devon Zona completing the top 5.

Buck Mills Sr picked up the win in the Factory Stock 15 lap main event. Mills, who started 9th in the running order wasted no time making his way to the front. By the lap 4 restart, Mills took over the second position with his sights set on early race leader Josh Towner. The caution flag flew for the final time on lap 7 in which time Mills made the move for the top spot. The closing laps found Mills maintaining the lead while Andy Brigham moved into second. At the checkered it was Mills winning over Brigham, Ray Lindquist, Charlie Gilbert, and Lucas Mills completing the top 5.

In the Belgray Oil 4 Cylinder Expert feature, Nick Kennedy picked up a hard fought win. Steve Lunn was the car to beat for the majority of the feature as he had raced to nearly a straightaway lead at times. Lunn maintained the lead until a lap 11 restart allowed Kennedy to make the move for the lead and eventual win. Kennedy was followed to the line by Jeremy Warren, Caleb Lacey, Dave Simms, and Devon Bailey rounding out the top 5.

In the Belgray Oil 4 Cylinder Novice division, Walter Decker made his way back to victory lane over Owen Clark, John Maynard, Mike Stark, and Bethany Bertram completed the top 5.

In the Xcel 600cc Modified feature, Zack Mills led wire to wire in route to his second consecutive victory. Adam Mudge pressured all race long but was not able to get by the quick Mills. Mills, Mudge, Tyler Smith, Nolan Smith, and Samantha Brown rounded out the field.

In the Xcel Jr division, Joshua Landers picked up the victory over Avery Decker.

NEWS AND NOTES: Despite the very wet spring, the track crew was able to put in long hours on the speedway. The track surface has improved each week and provided drivers with multiple grooves of racing with very minimal dust. Despite a busy night of racing, the show was ran off with very little hesitation and was completed in just over three hours. The main goal for 2019 has been to provide a great place to race and get the show completed without lengthy intermissions, both of which were accomplished on Saturday. The overall car counts were very solid and the racing on track was second to none. Racing returns this coming Saturday May 25th with a full show of Sunoco Modifieds, Insinger Performance Sportsman, Factory Stocks, Belgray Oil 4 Cylinders, Xcel 600cc Modified tour, and the Jr Xcel Division. Racing begins at 7 with hot laps at 6, grandstand gates open at 5, and pit gates opening at 4. For more information, check us out online at 5Milepointspeedway.com. on Facebook, Twitter, Instagram, or by phone at 607-775-5555.