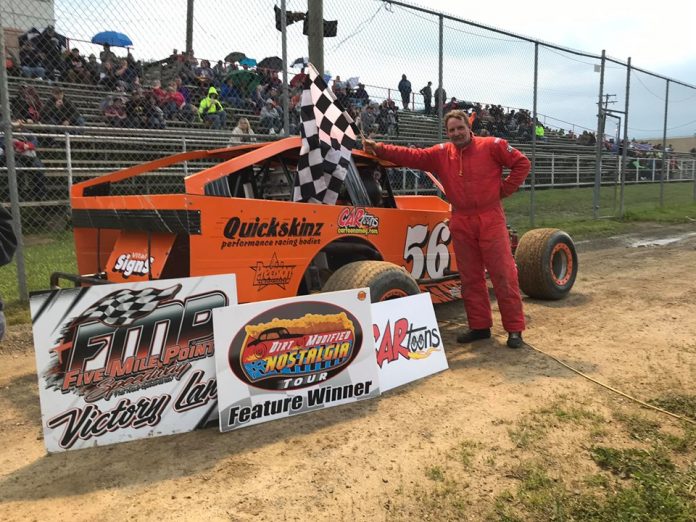 KIRKWOOD, NY – Horseheads, NY native Bob Johnson claimed his second Modified class Dirt Modified Nostalgia Tour feature in as many nights after picking up the win at Penn Can the previous evening. “This was high on my bucket list for tracks this year, Marge and I have been coming here for as long as we’ve been together. To get a win here is a dream come true” explained Johnson.

The Quickskinz #56 was followed across the line by Chip Gauthier of Hartford, NY with his first finish of the season after two DNS’s to date and North Augusta, Ont native Megan Ciglich.

It was Jeff Mitchell of Avoca, NY claiming his first ever feature win in the Nostalgia class. He was challenged throughout by Brad Litzenberger who had won at Penn Can on Friday.

5 Mile Points…John Stanley once again with fuel issues after optimistic they were resolved earlier in the day…Jeff Ackerman also having mechanical woes as did Allie Elkins…Darrell Wilson making the long haul down from Merrickville, Ont only to learn there is still left over issues from the wreck at Cornwall last Sunday…The series takes a much needed break this week before resuming June 29th at the Plattsburgh Airborne Speedway.


For more information on the DMNT:https://www.dirtmodifiednostalgiatour.com/

The 2019 Edition of the DMNT series is brought to you by: FlowMax DPF, CARtoons Magazine, SuperGen Products and Swagger Factory Apparel.