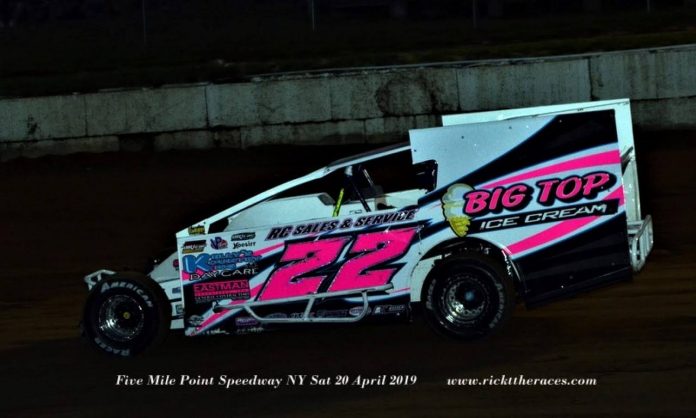 KIRKWOOD, NY – After a week off, the roar of engines came back to life. One hundred five teams filled the pit area. The Wingless Sprint Alliance Tour made a very exciting appearance.

First division up for the beginning of the evenings features was the Junior 600 Excel Modifieds. Avery Decker and Josh Landers took the green. Landers grabbed the lead and didn’t look back. It was a tough night for Avery Decker as mechancial woes have plagued his car. He didn’t finish the event this night, but do a very respectable race for the laps he completed. It was Landers recording another win in the beginners division.

Factory Stocks made their way on to the track. Adam Gilbert brought the field to the green. Justin Selzak grabbed the early lead, with the caution coming out. It shuffled the field sending Alan Komar and Tommy Groover pit side. On the restart, Selzak regained the lead being challenged by Buck Mills Sr. A caution came out involving Charlie Glibert and Buck Mills Jr., both cars were able to continue. The restart found Mills Sr. making his move for the lead. Unfortunately a flat tire sent hmi to the pits. He did return to battle with Charlie Gilbert and Ray Lindquist. Lindquist got the lead on the restart after Mills Sr.’s caution. Ray checked out bringing the car back to victory lane. Only four cars finished the event with Gilbert in second, Mill Sr. in third and Matt Millard in fourth.

The 600 Excel Mods were up next. Samantha Brown and Dominic Amato paced the field. When the started dropped the green, Tyler Smith made a move from the third position to take the lead. He opened up a lead with Brown and Amato in tow. Coming from deep in the field Adam Mudge worked his way to take the second position, just past the half way point. Unfortunately, for Mudge the event did not have a single caution. That did not allow him to catch the Smith machine. Tyler Smith recorded his first feature win of the season. Rounding out the top five was Adam Mudge, Dominic Amato, Zach Mills and Samantha Brown.

The final feature before the victory lane break was the Wingless Sprints Alliance Tour event. Two different types of Sprint Cars compete in this division. This event also ran from the drop of the green to the checkered flag. Eric Jennings started on the pole grabbed the lead. His competition Thomas Radivoy was trying to reel him in, but he could not do it. This was the first victory for Jennings, with Rhomas Radivoy in second, third to Charles Weslowski, Mike Traver in fourth and fifth to Gary Huston.


The popular Insinger Preformance Crate Sportsman feature was next on the schedule. Tom Hampton and Kyle Pierce made up the front row. Pierce grabbed the lead from Hampton. Randy Brokaw made a move into second setting his sights on the 9K of Kyle Pierce. Behind them Randy Fox had his plans coming into view. He worked his way into third now setting up the Brokaw machine. Running the outside groove was the fast way around the track the for 957. When Randy made it into second place the fans got to watch a great battle. The Fox and Pierce machines raced side by side with no contact. On lap fourteen Randy made his way around Kyle to take the lead. Although a late race caution came out, Kyle Pierce was unable to steal back the top honors. That gave Randy Fox win number two of the season. Pierce ws second, Randy Brokaw was third, Todd Titus was fourth and Corey Cormier in fifth.

The Belgray Oil Front Wheel Drive classes were up next. The competitive Novice class was up first. Owen Clark and Bethany Bertram made up the front row. When the green flag fell Clark grabbed the early lead. He was challenged by Tyler Vaughn, holding him off until a caution came out on lap five. On the restart Vaughn stole the lead from Owen. Mean while current points leaded Walter Decker was working his way to the front. It only took a couple of laps for the Decker number 22 to take the lead away from Vaughn. Walter held off the rest of the field to record another win. Rounding out the top five were Tyler Vaughn, Owen Clark, Jason Colwell Jr., and Bethany Bertram.

The Expert Front Wheel Drive class took to the track. Back after a nasty crash two weeks ago was current points leader and 2018 track champ, Nick Kennedy. He started in the fourth position with the hopes of visiting victory lane. Lady luck once again was not on his side. A mechancial problem sent him to the pit area after working his way through the field. Meanwhile, Jeremy Warren once again had a plan to revisit victory lane. The early race leader Steve Lunn dominated the feature until just past half way. Warren made his move to take the lead away on the high side. He maintained the lead holding off Lunn for his second race win in a row. Third went to Dave Simms, fourth to Caleb Lacey and fifth to Andy Bolles.

The final feature event of the night was the Sunoco Modifieds. Steve Babciek and Glenn Knapp made up the front row. When the green flag dropped Brandon Walters grabbed the lead. He also found the outside groove to his liking. He stated, that his season has not been what they had hoped for. Even though the feature had several cautions that did not keep Walters from keeping his sights set on the victory. Great run for Glenn Knapp who picked up a qualifying race win. He tried to keep the 22 of Walters in his sight,but Brandon knew what he wanted. Behind the battle for the top spot several cars including current point leader Brian Malcolm worked their way into top spots. Brad Szulewski and Brian Puckett also worked throught the field. When the checkers fell it was Brandon Walters becoming the sixth different winner in the modified division. Glenn Knapp finished in second, Brad Szulewski was third, fourth was Brian Malcolm and fifth as Steve Babciek.

Coming up on Saturday, August 17th, will be a night off for the modifieds. The weekly divisions along with the Wingless Sprint will be on the racing card. Gates open at 5 PM for grandstands with hot laps at 6 PM and racing at 7PM. For more information visit our facebook page. 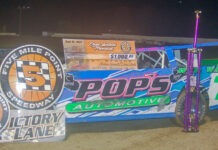