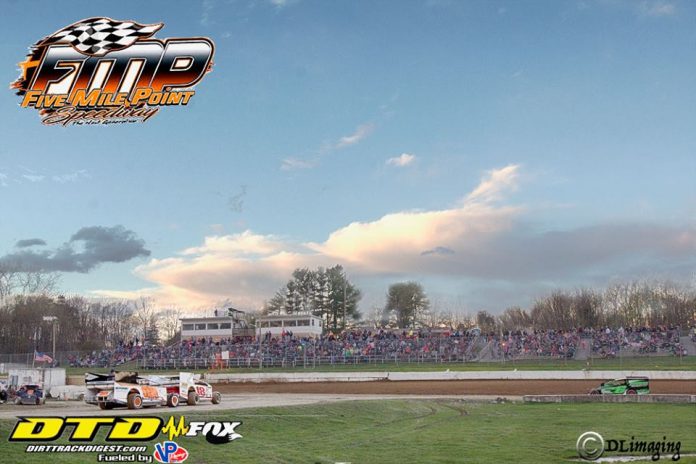 The weekend will kick off on Saturday night at 7:11 p.m. featuring a 50 lap feature for the Sunoco Modifieds, paying $2,711 as a tribute to Dave Kneisel. They will be joined by another special event with the running of Little Mike’s Race to Win for the IMCA Style Modifieds, paying $1,000 to win. The Factory Stocks and Belgray Oil Four Cylinders will race for $300 to win and will be joined by the NY6A Micro Sprints in their only appearance of the year.

Kneisel is one of the original 50 Greatest Drivers at Five Mile Point Speedway. He was a five time Track Champion, taking home those honors in 1953, 58, 63, 66 and 73. He was also a three time winner of the prestigious Heath Memorial with those wins coming in 1971, 73 and 74. His 54 Modified feature wins is third on the all-time winners list behind only Chuck Akulis (107) and Mike Colsten (62).

In addition to his driving success, he was also an accomplished car builder and innovator who was way ahead of his time. Jack Johnson piloted a Kneisiel Chassis to victory at Syracuse in 1979. He was the first driver from New York State to win Syracuse. That sparked a flurry of sales as the Kneisel Chassis became a must have car.

Little Mike’s Race to Win is run in memory of Mike Stolarcyk III, who was a standout driver in the IMCA Modified division. Stolarcyk passed away unexpectedly in the prime of his life and career. He was admired by all of his competitors, which is a testament to who he was as a person. The IMCA Style Modifieds will race for $1,000 to win on Saturday in his honor.

The weekend will close out on Sunday featuring the Grit Series for the Insinger Performance Crate Sportsman. They will be joined by Factory Stocks, Belgray Oil Four Cylinders, as well as an open show for the 600cc Modifieds and the Wingless Sprint Alliance Tour. Race time on Sunday is 6:00 p.m.

This will be the second appearance of the Grit Series at Five Mile Point this year. Dave Marcucilli was victorious in April over Jimmy Zacharias, Randy Brokaw, Ryan McCartney and Randy Fox. Another strong field of cars is expected. 32 Insinger Performance Crate Sportsman were in action this past Saturday at the Point on Season Championship Night. McCartney currently leads the points over Dale Welty, Brokaw, Saturday’s winner Blaine Klinger and 2019 Track Champion Corey Cormier.

It will be a big weekend for the Factory Stocks and Belgray Oil Four Cylinders. Both divisions will race for $300 to win, both Saturday and Sunday nights. The fledgling Wingless Sprint Alliance Tour will make an appearance at the quarter mile on Sunday as well. This growing class for affordable Sprint Car racing is perfectly suited for the quarter mile at Five Mile Point and always puts on a great show. The 600cc Modifieds will compete in an open show to close out their season at the Point.

Get ready for an exciting weekend of racing this Saturday and Sunday at Five Mile Point Speedway. It’s the Sunoco Race Fuels National Quarter Mile Dirt Track Championship Weekend. The speedway is located on Francis Street in Kirkwood, New York, near Binghamton. For further information look us up on our Facebook pages or call the speedway office at 607-775-5555.