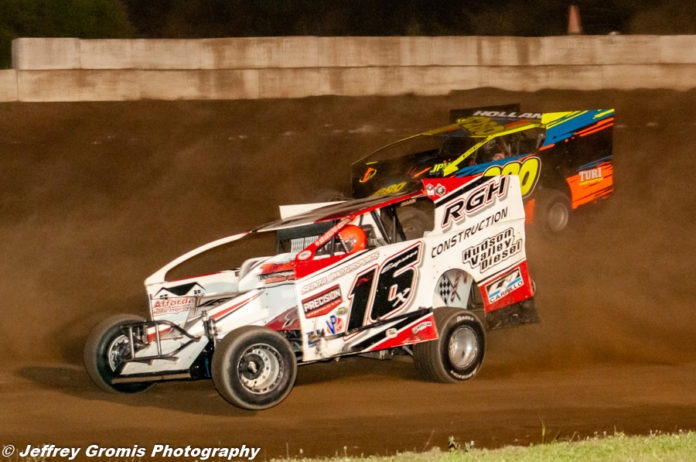 KIRKWOOD, NY – The 70th consecutive year of racing at Five Mile Point Speedway has certainly been one of a kind. The speedway has been forced to keep the spectator grandstand closed throughout the season due to NYS Covid-19 guidelines. This has not slowed any of the enthusiasm of the 70th Anniversary Season as racing has continued on Saturday nights.

Fans have a unique opportunity this Monday evening to see the 56th running of the Heath Memorial for Modifieds live through a multi-camera pay per view broadcast. The broadcast is only $19.99 and includes all of the racing on Monday evening. The live broadcast can be seen at www.dirttrackdigest.tv. Racing begins at 7 p.m. Pit gates open at 4:30 p.m. with practice set for 6:15 p.m. The racing program will include the Insinger Performance Crate Sportsman, Factory Stocks, 600 Modifieds, FWD Four Cylinders and Juniors.

This Monday the speedway will host the re-scheduled 56th Heath Memorial. The race was postponed to August with the original hope that the spectator grandstand could be open at this point. That is still not the case. Despite this, teams are ready to do battle for the 30 lap $2,000 to win Modified headliner. Travis Smith is the defending race winner.

This Monday five championship drivers will be added to the 65 All-Time Greatest Drivers list bringing the total to 70. All five drivers are past Modified Track Champions and includes Kevin Bates, Don Hart Jr., Justin Holland, Brian Malcolm and Shaun Walker.

The 70th Anniversary “All-Time Greatest” Drivers will be honored at the 56th running of the Heath Memorial this Monday at Five Mile Point Speedway. Irving and Anna Heath founded and built the speedway in 1951. That event honors them each season at the speedway.

The complete list of the All-Time Greatest 70 Drivers can be found below. All of the driver’s names are featured on the 2020 70th Anniversary Five Mile Point Speedway T-Shirt. All historical and upcoming information can be found on our official website at www.5milepointspeedway.com.