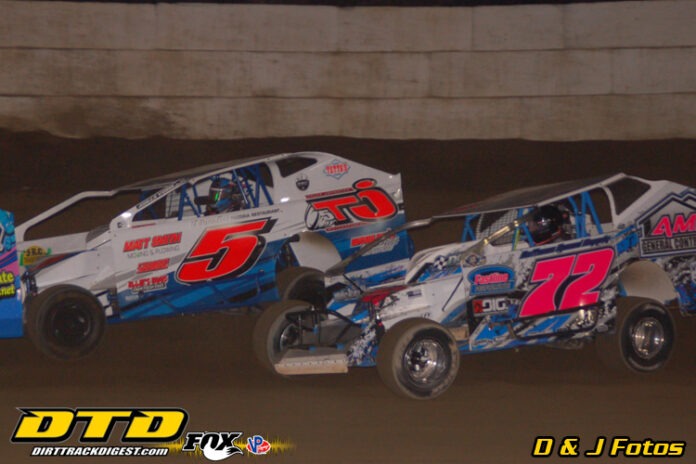 KIRKWOOD, NY – Tyler Johnston made the most out of his 2020 rookie season at Five Mile Point Speedway in capturing the Fall Championship Series. On Saturday, Johnston started off the Spring Championship Series with a victory in the GRIT Crate Sportsman 30 lap main event. The victory was worth $1,000 for Johnston as the racing program served as the 71st consecutive season opening event at Five Mile Point Speedway.

A.J. Potrzebowski and 2020 Regular Season Track Champion Gary Smith started in the front row for the 30 lap GRIT Crate Sportsman lid lifter. At the drop of the green Smith utilized the outside line to immediately jump into the race lead. Johnston quickly worked from fourth place to the second slot in the early stages as Smith tried to open his advantage. Smith set a torrid pace during the first third of the race as the leader had already caught lapped traffic by lap 11.

Smith utilized the lap cars to keep Johnston in tow as the race remained caution free. For Smith his early dominance came to an end on lap 16 as he had a right rear tire go flat while leading. This brought out the first caution of the race and Smith would have to restart from the rear of the field. This put Johnston in the lead with Potrzebowski in second. Back to back Modified Track Champion Brian Malcolm was driving the Alan Komar #88 and was now third after starting sixth. After the first caution of the race three consecutive cautions flew before another lap was logged.

The 20 lap Street Stock Feature event was a caution free affair as Steven Deinhardt led wire to wire for the victory. Doug Stack, Jr. and Deinhardt led the field to the original green flag when Deinhardt immediately taking command. Kurt Stebbins making a rare Five Mile Point Speedway appearance, moved in to second on lap 1 after starting third. Stebbins stayed close to Deinhardt but could not make a serious challenge for the race lead. On lap 15 Stebbins closed the gap but Deinhardt utilized lapped traffic to open his advantage. At the checkers Deinhardt was followed by Stebbins across the line. Damon Decker had a solid run for third place with Stack and Kurt Decker completing the top five slots.

Like the Street Stocks the Factory Stock “Tommy Boy 20” feature event went caution free. Bob Mills and Jarred Dennis sat on the front row for the 20 lap feature event. Like the other feature races Dennis used the outside line to race into the lead at the drop of the green. Dennis and Mills put on a great battle for the race lead. Dennis was looking for his first ever Five Mile Point Speedway victory as he battled Mills. Mills took over the race lead on lap 9 and once out front he never looked back. Mills led the final eleven laps as the entire race went without a caution period. Mills was followed across the line by Dennis, Jason Thomas, Jason Rhodes and Buck Mills, Jr.

The Crate Sportsman Futures division continues to grow since its inception late in the 2020 racing season at the speedway. Thirteen drivers took the green in the 20 lap nightcap feature event on Saturday. Doug Smith was impressive as he led the entire 20 lap feature in dominating fashion. Smith moved up from the All-Star Slingshot division and looked like a seasoned Crate Sportsman driver in his first race in the division. Three caution periods slowed the action but did not derail the efforts of Smith. Smith was followed across the line by Ned Fitch, Chuck Culbertson, Adam Gilbert and Brandon Christ. Gilbert moved up from the Factory Stock division. An impressive twelve of the original thirteen drivers finished the 20 lap feature.

COUNTER POINTS…An extremely busy day of racing saw just under 200 laps of feature action on the quarter mile oval alone between the Big Car and Small Car programs…A combined 48 Crate Sportsman teams were on hand…The GRIT Crate Sportsman program was loaded with talent as no less than eight Modified drivers competed in the 2021 season opener…The four feature events were completed in less than an hour as the teams did an outstanding job after the long off-season…Bob Mills, the Factory Stock winner received and extra $100 from The Goodrich Family for his victory…The racing was outstanding in every division throughout both the Big Car and Small Car programs…Once again due to New York State Covid-19 Restrictions the grandstand remained closed to spectators…