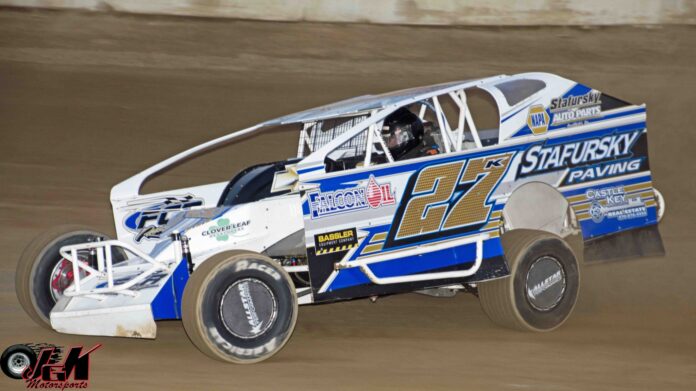 By virtue of the top qualifiers re-draw Bryce Bailey and Tyler Johnston led the Insinger Performance Crate Sportsman field to the green flag for the start of the 30 – lap feature event. At the drop of the green Johnston utilized the outside line to jump into the race lead.  Johnston is no stranger to leading features at the quarter mile oval as he won the season opener last week and was the Fall Championship Series Titlist in 2020.  As Johnston set the pace Bailey, a 2021 Rookie of the Year candidate held the second position.  Ray Leonard was an early mover as he advanced quickly from his sixth starting spot up to third place.

The first and only caution of the feature flew on lap 5 as Randy Brokaw slowed.  On the restart Johnston re-established himself as the race leader as now Leonard and Tonkin slipped past Bailey and Dominic Roselli ran in the fifth slot.  Great battles were taking place throughout the field as Tonkin worked inside and outside of Leonard looking to take over the second slot.  This allowed Johnston to open his lead slightly.  On lap 10 Tonkin made his way into second and set his sites on Johnston for the race lead.  Leonard held on to third as Bailey and Roselli continued in the top five.  Bobby Hackel and Rusty Smith were now working on Roselli as they tried to break into the top five.

A great battle for the race lead ensued between Johnston and Tonkin over the next ten laps. On lap 21 Tonkin was able to work past Johnston and into the race lead. The balance of the top five remained unchanged but Rusty Smith was working hard as he battled with Roselli for the fifth slot.  On lap 29 Smith made his way past Roselli for the fifth position.  Tonkin went on for his first win of 2021 and his second in his past three starts at the speedway.  Johnston maintained his point lead in the Spring Championship Series with his second place finish.  Leonard wound up third after his strong run and Bryce Bailey finished fourth in only his second Sportsman start.  Rusty Smith tallied the fifth spot.  Roselli, Hackel, Jimmy Zacharias, Brian Malcolm and Blaine Klinger rounded out the top ten.  Despite only one caution period Hackel advanced from his twelfth starting slot to finish seventh and Malcolm came from twenty-second to finish ninth.  Heat winners were Russell Benke, Roselli and Hackel.

Steven Deinhardt picked up where left off the week prior in dominating the 25 lap Street Stock feature event on Saturday. Lanson Albanese was scheduled to start on the front row with Deinhardt but was unable to make it for the start.  This moved Dusty Decker up to the front row for the drop of the green.  When the green flew Deinhardt darted out into the lead.  An early caution shuffled the deck as Doug Polhamus made contact with Doug Stack while running fourth and fifth.  Both restarted at the rear of the field.  When racing resumed Deinhardt again took command.  Damon Decker now ran in second place with Dusty Decker and Kurt Decker in tow. Both Stack and Polhamus were now charging back through the field and in just a few short laps Stack had broken back in to the top five.  The race remained green until lap 13 when this time Dusty Decker and Stack spun bringing out the final caution.  Both Decker and Stack were sidelined during this yellow along with Don Russell, Jr. Polhamus was now all the way up to second place after re-starting last on lap 2.  On the restart Deinhardt again led the way.  Polhamus was able to stay close over the remaining laps but did not make a serious challenge for the race lead.  At the finish it was Deinhardt, Polhamus, Kurt Decker, Jerry Lobdell and Don Reeves completing the top five.  Heat winners were Polhamus and Deinhardt.

Tommy Groover led all twenty laps of the Factory Stock feature event on Saturday night.  Groover missed opening night but made a statement upon his arrival week two.  Groover and last weeks winner Bob Mills had a tremendous battle the entire twenty laps but Groover never relinquished his lead.  Groover was the race winner followed by Mills.  The second place finish for Mills keeps on top of the Spring Championship Series points.  Jason Thomas charged from the seventh starting spot to finish third.  Kevin McDonald wound up fourth and Alicia Towner completed the top five at the checkers.  Heat winners were Groover and Buck Mills.

Brock Pinkerous was looking to record a rare “double” on Saturday by winning the 20 lap Futures Sportsman race after earlier winning the All-Star Slingshot 20 lapper.  Pinkerous and Jacob Mele started on the front row at the drop of the green.  Pinkerous took the race lead as Mele ran closely by in second position.  Last weeks winner Doug Smith, another All-Star Slingshot graduate, was quickly advancing from his fifth starting spot.  Smith made his way up past Mele for second place and began to chase down race leader Pinkerous.  On lap 8 Smith utilized a lapped car to dart underneath Pinkerous for the race lead.  The final caution of the race waved a short time later when Pinkerous spun exiting turn four.  Smith went on for two wins in two starts.  Chuck Culbertson finished second.  Jacob Mele had a strong run in third in his first start.  Eric Winsor made huge strides from his first week to finish fourth in only his second start with John White finish fifth.

COUNTER POINTS…Another busy program of racing took place with the Small Cars being on the daytime card and the Big Cars running at evening…Over 300 laps of feature action took place with all of the action completed by 10 p.m…Ashley Rogosich the Fall Champion was the All-Star Slingshot race winner…Brock Pinkerous won the Junior Slingshot…John Maynard was the Novice winner and Kenny Underwood recorded win number 100 with his victory in the 4 Cylinder Expert class…Brett Gray was the 600 Modified winner…Great racing took place in all of the racing divisions…The nighttime racing was excellent…In Ninety-Five laps of feature action only a total of six cautions flew…Three of those came in the 20 lap Crate Futures main event…Race three of the Spring Championship takes place this Saturday…The regular season begins on May 15th…Many of the Crate Futures drivers will be looking to move up to the Insinger Performance Crate Sportsman at that time…This Saturday will see the Vintage Cars making their first appearance in an Open Format event… 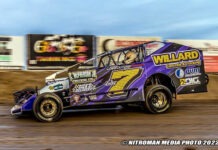