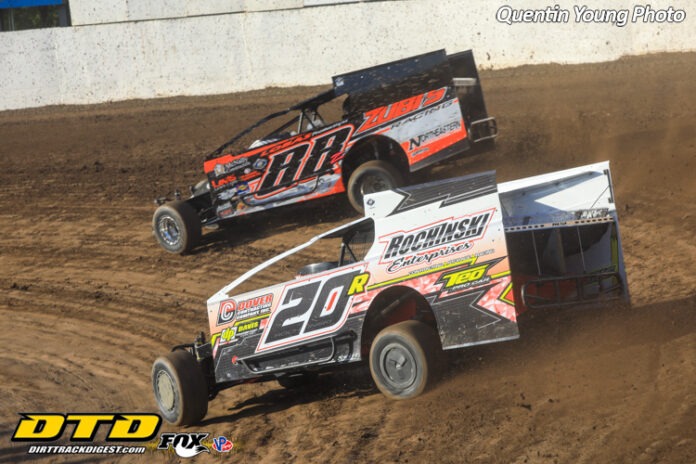 BINGHAMTON, NY – Five Mile Point Speedway held “The Official Season Opener” on Saturday night as the regular point season began.  This also meant the return of the Modified division along with fans in the spectator grandstand.  Nick Rochinski topped a solid Modified field after starting eleventh in the 30 lap feature event.  The victory in the 71st Modified lid lifter was worth $1,200.

Brian Mady and Ron Cartwright, Jr. started on the front row for the 30 lap Modified feature event on Saturday.  It was Mady immediately moving out front at the start.  The Five Mile Point Speedway rookie looked impressive as he set a quick pace.  A number of drivers were making moves early.  Byron Worthing charged from fifth starting slot to second in just two laps.  Worthing overtook Joey Colsten for the runner-up slot and set his sites on Mady out front.  A caution on lap 10 flew as Cartwright slowed on the speedway. By lap 10 Mady continued to lead as Worthing ran in second with Colsten, Justin Holland and Rochinski now in the top five.  Holland started in ninth and was on the move as well.

On the restart Rochinski quickly hustled up to third place as Brett Tonkin challenged the top five after starting sixteenth on the grid.  Mady continued to impress out front as Rochinski began to work on Worthing for second place.  The caution flew on lap 14 as Joey Colsten slowed in turn 1 with motor issues ending his night early.  On the restart Brad Szulewski was spun and he too went pit side.  When racing resumed Rochinski made his way past Worthing on lap 15 as Tonkin followed suite on lap17 and now found himself in third.  On lap 20 the top five remained Mady, Rochinski, Tonkin, Worthing and Holland.

Back to back Modified Track Champion Brian Malcolm was now up to sixth place and looking to join the top five battle.  Malcolm started fourteenth on the field and methodically worked his way forward. Rochinski tried to work past race leady Mady for several laps and finally made his way past on lap 23.  Tonkin worked in to second place on lap 24 as Worthing tried his way around Mady for third.  On lap 28 Holland saw his great drive come to an end as he headed pit side.  The race remained green and Tonkin was able to stay close but not seriously challenge for Rochinski for the race lead.  At the finish Rochinski scored the win with Tonkin in second.  Mady hung on for third with Worthing and Malcolm completing the top five.  Brian Puckett drove from nineteenth to sixth and Matt Cole had a solid run from thirteenth to seventh.  Nick Petrilak was eighth and Szulewski rebounded from his earlier trip to the pits for ninth.  Barry White drove from twenty-third to tenth at the finish.